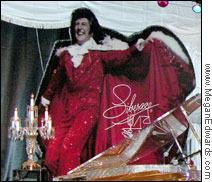 If it’s understatement you’re after, don’t go to the Liberace Museum. If you admire self-effacing modesty, stay away. Are you a person of quiet tastes? Be warned. The strip mall at the corner of Tropicana and Spencer will assault your tender sensibilities.

And don’t expect any apologies, either. Liberace was the guy who coined the phrases, “I’ll cry all the way to the bank,” and “Pardon me while I go slip into something even more spectacular.”

Liberace spent his life accumulating not only accolades for his flamboyant piano playing, but also antique furniture, dazzling costumes, ostentatious jewelry, famous pianos, and glitzy cars. He opened his museum in 1979 to display some of his fabulous possessions, and now, 25 years later, a whole new generation is keeping his rhinestone-studded legacy alive. 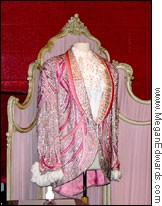 Liberace’s legacy, however, is not only about baubles, bangles, and Rolls Royces. In 1977, he created something called the Liberace Foundation for the Creative and Performing Arts. Over the years, the foundation has handed out millions in scholarships to aspiring musicians and artists.

Thus it seems appropriate that the Liberace Museum, as part of its anniversary celebration and to mark Liberace’s birthday, holds a piano-playing competition each year, the Liberace “Play-A-Like” contest. I attended, curious to discover what competitors might do to emulate “Mr. Showmanship.”

The contest was held in a room filled with a hundred or so white plastic lawn chairs, most of which were occupied by the time I arrived. At the front of the room, a huge cardboard cutout of Liberace beamed over a rhinestone-studded piano. Five judges observed from a folding table at the left of the stage as an emcee in a glittery silver dinner jacket announced the next contestant.

The contestant looked nothing like Liberace. He was wearing a sedate black tuxedo, and he spoke with a quiet Russian accent. He played a Gershwin medley on the piano, and did it well. The next contestant was a woman who also played with professional competence. Her only nod to Liberace was a pink feather boa she had draped around her shoulders. Next came Dehner Franks, dapper but hardly flamboyant in another black tux.

What’s going on here? I wondered, and I checked the Liberace Foundation Newsletter I had picked up on my way in. “Competitors will be judged on piano technique, material selection and arrangement, and performance style, with additional credit awarded to those demonstrating exceptional presentation and costuming.” 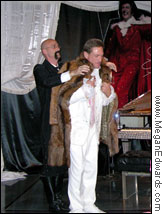 Robert Mihovilovich gets
a little help with his cape

The next competitor had obviously taken that last line to heart. Robert Mihovilovich, clad in a mink cape, was preceded to the stage by a handler in a black suit and leather knee-high boots. The handler removed Robert’s cape to reveal a pink and white pearl-and-rhinestone-studded costume. Robert also sported a full complement of gaudy rings on each hand and, I noticed as he twirled around and seated himself at the keyboard, glitter in his hair. He filled his three minutes with a multiplicity of trills and keyboard runs in an obvious salute to the man who’d inspired him. If “Play-A-Like” meant “Act-A-Like,” this contestant was a clear frontrunner. 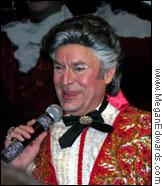 In major contrast was the next contestant. Peter Robberecht, a pianist from San Diego, wore a dark blue suit decorated with embroidered yellow stars and piano keys down each sleeve. His presentation, solidly in the tradition of Chico Marx, included playing the piano with his back to the keyboard and using his foot to hit a distant key. He grinned for reporters as he played, pausing to allow the click of their camera shutters to punctuate his music. Was that a Liberace trick? I wondered. It was definitely a crowd-pleasing move, and I found myself laughing along with everyone else. 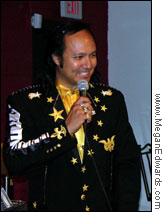 Peter Robberecht gets ready
to tickle the ivories

After another contestant with a dazzling smile and a metallic jacket, it was time for the judges to deliberate. While they were out of the room, entertainment in keeping with Liberace’s immortal status was provided by performers pretending to be Marilyn Monroe, George Burns, and—of course—Mr. Showmanship himself. It wasn’t long before the judges filed back in. With them came the emcee, who was now clad in a white suit with a large pair of feathered angel wings attached to the back.

Just so you know, Robert Mihovilovich came in third. Peter Robberecht was second, and the grand prizewinner was a contestant whose performance I missed. Spencer Baker had performed first, because he had to leave in order to get to UNLV’s graduation ceremonies and collect a master’s degree. I just hope he had a few rhinestones on his robe, and a little glitter on his mortarboard.