Two words have been reverberating in the back of my head all summer. “Road trip” began as a whisper sometime back in May, and it grew steadily more insistent until it was a bellow I could no longer ignore. Summer is made for road trips, and summer is almost gone.

Las Vegas is one of America’s best starting points for automobile journeys. It doesn’t matter which route you choose to get out of town. Every one of them goes to someplace marvelous. I thought about Grand Canyon, Mexico, Salt Lake City. I thought about the road through Monument Valley, Route 66, Highway 50, and all the other iconic western thoroughfares that are so easily accessible from the southern point of Nevada. They were all enticing, but in the end, it was mountains and ocean that won out. I decided to head north from Las Vegas, make a left past Beatty at Lida Junction, cross the White Mountains by way of Westgard pass, and drop down into Bishop. From there, I’d head up Highway 395 to a turnoff that spends most of the year closed. This is the perfect time of year, I told myself, for a drive over Tioga Pass. And after driving through Yosemite, why not keep pushing west? I couldn’t think of a better way to bid farewell to summer than to drive over the Golden Gate Bridge into the city at the end of the continent. San Francisco, here I come! 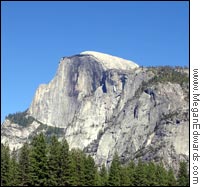 And now I’m back. My trans-Sierra journey was everything I hoped. Yosemite was as unbelievably splendid as always, and the oak-studded western foothills were carpeted in end-of-summer gold. A fog bank greeted me as I drove over the Golden Gate Bridge, but it was only a thin veil. On the other side, San Francisco sparkled in warm sunlight.

I walked around Union Square that afternoon, and explored North Beach that night. The next morning, as I sipped espresso in a coffee shop that wasn’t owned by Starbucks, I felt as though I were, not a day’s journey, but a million miles from Las Vegas.

San Francisco is so beautiful, I thought, such a perfect marriage of architecture and natural beauty. It has history and nature and sea breezes. It has culture and flower stalls and cable cars and… as I sat there on that perfect morning, I realized just how easily I could slip back into a mindset I once found familiar. From a café chair on Union Square, it is all too easy to regard Las Vegas with disdain. Phrases like “the great unwashed” and “cultural wasteland” nudged their way uninvited into my brain. Have I been deceiving myself to think that I love Las Vegas? I wondered. Have I been swept off my feet by a coarse desert raider? Maybe San Francisco was deprogramming me, tearing scales from my eyes, forcing me to see that what I thought was true love was only transient infatuation.

The feeling passed, but I couldn’t forget it as I wended my way homeward. This time I traveled by way of Lake Tahoe. I stopped at a Starbucks it an Albertson’s in Carson City before picking up Highway 95 to head home.

“I’m hoping this will get me a good part of the way to Las Vegas,” I said as I paid for my latte.

“Oh, you poor thing,” the barista said, and her male colleague chimed in with more condolences.

Wow. Not only was San Francisco telling me I was delusional, but now two kids in a supermarket coffee stand were reinforcing the message. 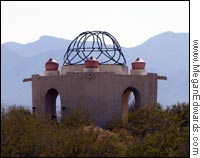 The Sekhmet Temple in
Cactus Springs

I drove south, pausing in Tonopah for food, Beatty for gas, and Cactus Springs to take a picture of the Sekhmet Temple. The sun was low in the sky by the time I saw the pointy top of the Stratosphere tower.

Sliding onto Interstate 15, I skirted the Strip just as the lights were coming up. I passed the fake Eiffel Tower and the phony New York skyline. You’re not in San Francisco any more, I couldn’t help telling myself. But I also knew, as I slipped past the golden towers of Mandalay Bay, that it’s not a mirage. It’s all real, exuberant in its growth, unstoppable in its energy. San Francisco hasn’t felt this way since it was a Gold Rush boomtown.

I’m home. Just under the wire, I got my summer road trip. It was every bit as restorative as I had hoped, and, as is always the case with road trips, I got more than I anticipated. When I headed west, I had no inkling that San Francisco would teach me that I haven’t been tricked by a vision in the sand. I really do love Las Vegas.