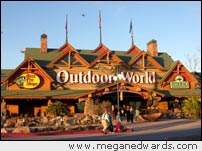 The Silverton is well known to travelers arriving by car from Los Angeles. It’s the first large casino you come to with a genuine Las Vegas address. RVers and truckers know it well, too. The Silverton’s RV park is one of the nicest in the city, and there’s a TA truck strop right across the highway.

The trouble was, the Silverton had begun to look like something out of an old Bonanza rerun. It was tired, to say the least, but what do you do with a Gunsmoke façade and a Rifleman interior? It’s a tough task to inject grooviness into an aging ersatz Western town. 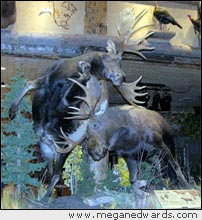 I have not discovered the name of the creative genius who realized that phony clapboard architecture has some fundamental similarities to hunting lodges in the Ozarks. And people who like fishing and hunting in Missouri aren’t that different from people who like to angle and shoot in Ely or Winnemucca. When you start thinking about it, the idea of adding a Bass Pro Shops Outdoor World store to a phony Virginia City is nothing short of brilliant. When I first learned of the addition, I watched the project with great anticipation.

It helped that I had once visited the original Outdoor World in Springfield, Missouri. When I heard people here talking about how the Silverton was adding “a new sporting goods store,” I had to hold myself back from shouting, “That’s like calling Wynn Las Vegas ‘a new motel!'” But I held my tongue. They’ll see, I told myself. And last week, legions of them did. Outdoor World is open, just in time to buy everyone on your gift list a shiny new rifle. 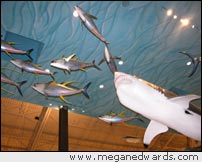 No, wait! It’s not just about guns. It’s about 154,000 square feet decorated to look sort of like the real outdoors. There are four “water features,” for example, including a huge tank that will eventually house the largest collection of big native Western fish in captivity. There’s a trout tank, too, and a stream-like structure with a waterfall. Formerly alive wild animals are posed in frozen action on artfully fabricated mesas and buttes. I thought the moose fight was the most riveting until I saw three little kids trying to rescue a mule deer under attack by a mountain lion. They were right. It was disturbing. Less so is the little bear staring down a skunk, and the big bear trying to climb into an Airstream trailer. 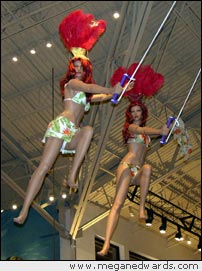 And oh, the vast array of products! You haven’t seen camo until you’ve been to Outdoor World. While most of it is designed with masculine hunters in mind — I didn’t see any camouflage wedding dresses — you can outfit your baby to match a birch forest. You can try out bows in the indoor archery range, shoot guns in the gun range, pretend to shoot guns in the shooting gallery, and hit golf balls in the indoor simulated driving range. There are videos to teach you everything from fly fishing to rock climbing, along with books, specialized equipment for every sport you can think of, and friendly employees who really seem to know what they’re talking about. As Outdoor World continues to roll out its grand opening, classes will be offered in a variety of outdoor disciplines. Nowhere in the world, I’m willing to bet, can you get so much outdoors without actually going outside. 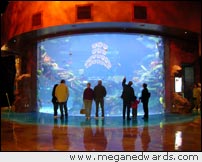 Show me the mermaids: The new
110,000-gallon saltwater tank

The watercraft section of Outdoor World is as large as a marina at Lake Mead, and equally as full of boats. An underwater effect is created by the fish suspended from the blue wavy ceiling, and I’m happy to report that these are not boring fish. They are sharks with open jaws pursuing terrified smaller species. More interest has been added by a couple of water skiing showgirls.

There’s plenty more at Outdoor World I haven’t mentioned, including a whole department dedicated to NASCAR fashions and lots of outdoorsy food like jerky and trail mix. 154,000 square feet holds a lot — more outdoor-related products than you ever knew existed.

Outdoor World alone would have been enough to give the Silverton a shot in the arm, but the casino has some cool new stuff, too. There’s a miniature bowling alley made out of an elongated Airstream trailer, and the piece de resistance is a 110,000-gallon saltwater fish tank and a big new bar with an underwater theme right next to it. One of these days, mermaids are supposed to appear in the tank in the evenings for brief shows every hour. They’ve been elusive so far, but the billboards on Las Vegas Boulevard probably aren’t lying. With luck the sea nymphs should come out of hiding by the end of this weekend, and in the meantime, the tropical fish in the tank are quite spectacular.

So it’s good-bye Ben Cartwright, and hello, Jimmy “America’s Favorite Fisherman” Houston, and other celebrities who like to shoot, fish, golf, and drive fast cars. If the non-stop traffic jam at the corner of Blue Diamond and Industrial Road is any indication, Bass Pro Shops Outdoor World knows how to get a heck of a lot of people indoors.