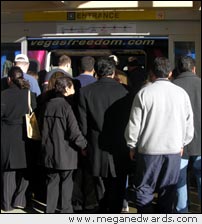 The price was right: Crowds board
the Las Vegas Monorail on
Christmas Day

Since I am working on a novel set in Las Vegas between December 16th and New Year’s Day, I decided it would be enlightening to visit the Strip on Christmas. Word around town is that, unlike New Year’s Eve, Christmas isn’t a big holiday here. But I’ve learned that the best way to find out true facts about my adoptive hometown is to trust no one and go take a look myself. Las Vegas is changing too fast to rely on statistics older than yesterday. In addition, Las Vegas is the victim of far too many stereotypes, and I certainly don’t want to be accused of promulgating any undeserved ones.

So here’s my report on Christmas Day in Sin City, which also happened to be a Saturday this year. And there was something else to make it even more special. The Las Vegas Monorail, after being out of commission for nearly half a year, was running again. And not only were the sleek torpedoes zooming by on their elevated grooves, they were transporting all comers without charge. It was a special “Hey! We’re back!” gesture on the part of the Monorail’s operators, and I couldn’t resist accepting a free ride.

Having decided to board the Monorail at the Hilton, I drove there from my digs on the south side of town. Even though it was eleven or so in the morning, streets were pretty much deserted. What traffic there was consisted of kids on new bikes and an occasional CAT bus. All that changed the moment I hit the corner of Tropicana and the Strip. It took me forty-five minutes to inch along through the gridlock until I turned the corner at Sahara. The plus side of the traffic jam was that I could check out the situation on the sidewalks without driving recklessly. It looked like the whole world was oozing along in peristaltic congeniality, enjoying both the man-made splendor of the Strip and the balmy, blue-skied day provided by God.

“The whole world” is not an exaggeration. While I was too busy steering to take a precise census, I did note representatives from every variety of human subspecies I’m aware of and quite possibly a few I’m not. In addition, I saw people from age zero through at least 95. And while it wasn’t a scene to inspire a nostalgic carol (“I’m Dreamin’ of a Fake Rock Christmas”), it was definitely jolly. The jollity was perhaps best illustrated by two grandmotherly ladies astride a tandem tricycle. One was wearing a Santa hat, and the other sported a pair of brown felt reindeer antlers. They were calling out holiday greetings as they wove their way through the pedestrian hordes, and nobody seemed to mind that they were taking up more than their share of pavement. 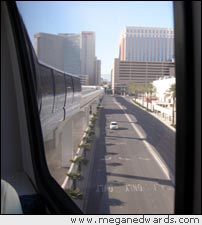 The crowd at the Monorail proved that $0 is indeed a very attractive price. The platform at the Hilton was crammed with people waiting for the southbound train, so I decided to take a northbound one. I figured I’d ride one stop to the end of the line at the Sahara, let everybody get off, grab a seat, and then ride south in upholstered comfort. My plan was to get off at the Flamingo and check out the Christmas tree in front of Caesars Palace.

My plan changed when I saw how few people got off at the Sahara. I did get a seat, but as the car took on more passengers with each stop as it headed south, I decided to ride on down to the MGM Grand before giving up my spot next to the window.

The scene at the MGM Grand was almost indistinguishable from any other day of the year. It’s always hard to tell whether lights have been added for the holidays or if they’re always there. One little difference, though, was the number of employees wearing Santa hats. If nothing else gave a clue to the date, the guy sweeping the floor in a red plush hat with a white plush pompom did. It was food for thought as I rode the Monorail back to the Hilton.

Las Vegas does not ignore Christmas. Like other holiday destinations, it does the exact opposite, which is to say it finds a way to keep on running at full throttle on days many Americans hold sacred. The guy sweeping the floor at the MGM, the cocktail waitresses at the Hilton, the Monorail security guards — they were all well aware of what day it was, and I’m sure they would have preferred to stay home if it had been an option. But the hospitality industry doesn’t operate that way. It’s got to work when everybody else plays. Somebody has to rent tandem trikes to jolly old ladies.

I drove home via the Strip, but for a reason I have never been able to discover, the west side is always less crowded than the east, and my journey south was almost swift. As soon as I left the Strip, the streets were as deserted as they had been earlier. Without knowing for sure what goes on behind closed doors in Las Vegas on Christmas afternoon, I can say that it looks like whoever’s not working on the Strip is asleep. They’re probably resting up for New Year’s.

2 responses on “Christmas on the Strip”