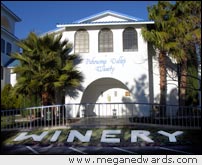 “Let’s take a drive out to wine country.” It sounds a lot more like a San Francisco suggestion than something you might hear on the Las Vegas Strip. But the fact is, you can take a drive to a winery from Las Vegas. This excursion is known locally as “going over the hump to Pahrump.”

Don’t worry. I’m not going to claim that a trek over the hump (the pass through the Spring Mountains on Highway 160) is anything like a visit to Napa Valley. Pahrump is a much less pretentious place, for starters. It’s still a small town, even though it does have a Wal-Mart and two Terrible’s casinos. It also has a couple of “world famous” legal brothels, but I digress. 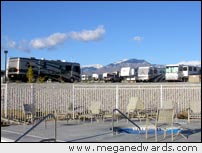 RVs where the grapevines used to be

The Pahrump Valley Winery was started fifteen or so years ago by a man who genuinely believed he could grow grapes in the Mojave Desert. In the battle of man versus climate, the man lost, but that didn’t stop him from making wine anyway. He imported grape juice from California, built a charming tasting room and restaurant, and proclaimed his enterprise “the oldest winery in Nevada.” (It was also the only winery in Nevada, but now there’s another one near Carson City.)

Today, the Pahrump Valley Winery is owned by Western Horizon Resorts, and a nicely appointed RV park has been added to the development. When I arrived last Sunday, the long rows of RVs suggested that Pahrump’s real estate is a lot better suited for supporting snowbirds than grapevines.

The tasting room was bustling with activity. I stood next to a couple from San Jose who had just toured Death Valley. The man behind the counter gave each of us a checklist and explained that we were welcome to try everything — eight different varieties — as long as we started at the top (Chardonnay) and kept moving down until we reached creme sherry. 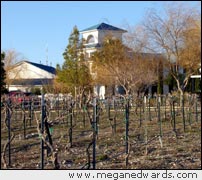 Grapevines in the gardens
of Pahrump Valley Winery

I doubt that I am alone in saying that the white wines are superior to the reds at Pahrump Valley Winery. I thought the best was the semi-sweet called “Symphony,” a varietal that lends its name to the restaurant at the winery. The creme sherry was pleasant, too.

After my tasting, I had a late lunch in Symphony’s restaurant. The main room is circular, and I sat next to a window overlooking the winery’s gardens. Other diners were eating on the veranda.

The menu offered a wide variety of dishes and, of course, the house wines. The prices are reasonable, especially for the wine, which was the same price per bottle in the restaurant as it was in the winery shop. My waiter was pleasant and attentive, and told me that if I were going to have two glasses of wine, I might as well buy a whole bottle, because the price would be the same.

“And we’ll recork it for you if you don’t finish it,” he added. “You can take it with you.”

One (quite generous) glass of wine was enough for me, and after lunch I headed outside to wander through the well-tended gardens, which feature a token number of real, live grape vines, an outdoor stage, a gazebo, and picnic tables.

After I’d allowed the generous glass of wine to wear off, I headed back “over the hump,” all the while thinking how nice it is that Las Vegas has a charming, off-the-beaten track destination like the Pahrump Valley Winery. Their wine can’t compete with the big guys in Napa, but as the polite couple from San Jose put it, “They make up for it by being here.”