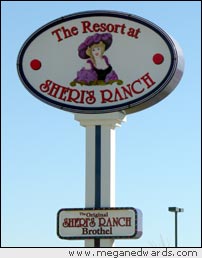 Prostitution is illegal in Clark County, even though billboards offering “Full Service Ladies Direct to Your Room” suggest otherwise. Those are personal dancers, understand? They come to your hotel room and dance for you. That’s it. Well, okay. You can take them to the movies or out to dinner, but if you thought those billboards were advertising more than a little innocent social interaction, well, you’re just wrong! There’s no prostitution in Las Vegas. Everybody knows that for that sort of thing, you have to go to Pahrump!

The great irony is that in Las Vegas, where the oldest profession is illegal, ads for it abound. (Yeah, those dancers do more than dance, but if you call one, make sure she isn’t an undercover Metro cop.) “Over the hump” in Nye County, where brothels are tax-paying, government-regulated enterprises, the only advertising you’ll see on the highway is a faded billboard touting a “world famous” brothel museum in the tiny town of Crystal. You’re supposed to figure out that the “museum” is the kind with (wink, wink) interactive exhibits.

They’ll leave the red light on for
you: Sheri’s Ranch never closes.

But those who’ve done their homework on the Web or allowed a taxi driver to be their Sacagawea know that you don’t have to drive all the way to Crystal for pay-per-act sex. By the time you see that billboard, you’ve already gone past the turnoff for Pahrump’s two naughtiest attractions, the Chicken Ranch and Sheri’s Ranch. The easiest route is this: take Highway 160 from Las Vegas “over the hump” to Pahrump. Then look for Manse Road. Turn left and go to the second stop sign. Turn left on Homestead. Go to the end. Both brothels are on the left side of the road just before it disappears into howling desert. 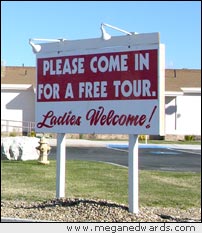 I doubt that I will ever be a patron of either of these establishments, but that doesn’t mean I haven’t found them interesting. Nevada is the only U.S. state that has legal brothels, after all, which in my opinion makes them worth at least a drive-by. Imagine my delight when I pulled up in front of Sheri’s Ranch and found a neatly painted sign pounded into the gravel reading “Please Come In for a Free Tour. Ladies Welcome!” It was midmorning on a weekday, and there were only a couple of other cars in the lot. Why not? I asked myself, and I headed toward the front door.

Although Sheri’s Ranch has enjoyed many improvements in recent years, its architecture still reflects its mobile home beginnings. The trailers have been expanded and “permanentized,” but the “resort” (as its current owners prefer to call it) still has a slightly transitory look. Even so, the parlor — and that’s the only word that can suitably describe the chamber I entered — was attractively appointed with elegant furniture. There was no one around, so I just stood there, realizing it looked just the way I had expected, except — everything was white. It was as though Miss Kitty’s bordello, complete with ornate sofa and grand piano, had been transported from Dodge City and bleached. It even smelled a little like bleach. 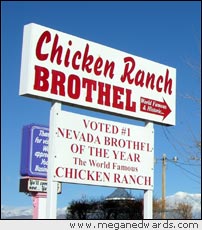 A woman who identified herself as a “shift manager” (the up-to-date term for “madam”) eventually appeared. I told her I was interested in the “free tour,” and she immediately launched into an enthusiastic description of what happens when a “gentleman” who wants to “party” arrives. She explained how a “lineup” works, and made sure I understood that the ladies are independent contractors — “They set their own prices and decide on their own menus.”

Next she showed me pictures of the “themed bungalows” where “gentlemen” can really indulge their fantasies. The bungalows weren’t included in the tour, but photos revealed one with psychedelic décor and others designed to make you feel like you’re on an African safari or hanging out with Cleopatra.

As my guide led me down a long hall, I noticed a set of shelves lined with at least thirty pairs of extreme high-heeled shoes, all in different sizes. I wondered what they were doing there, but the shift manager was ushering me into a room equipped with chains and shackles. Distracted by all the bondage hardware, I forgot to ask her about the shoes. They completely left my mind as my guide showed me several other rooms that featured Jacuzzis and told me about the resort’s commercial laundry, restaurant, sports bar, swimming pool, and spa services. She couldn’t show me any other rooms, she explained, because they were the private domains of “the ladies.”

Weekday mornings are quiet times at brothels, and I didn’t see a single customer while I was there. I did see one “lady,” however, a slim, tanned twenty-something in a g-string and a skimpy T-shirt.

“We’re open twenty-four hours a day, three hundred and sixty-five days a year,” the shift manager told me as she led me back to the parlor.

It wasn’t until I was driving home that I remembered the shoes. Why were they there, just around the corner from the parlor? Then it hit me.

“When I call a lineup, the ladies come running,” the shift manager had said. But nobody runs in nine-inch stiletto heels. Obviously, the ladies sprint barefoot, screech to a halt before turning the corner, slip on their sexy footwear, and arrive in the parlor ready to make a big impression.

That and the faint smell of bleach, I never could have learned from a Web site. And I’m sure there’s plenty more to learn. Maybe someday I should go back as a customer. The other thing I now know is that if they’ve got the cash and the inclination, ladies really are welcome.

GPS Coordinates for a number of Nevada brothels

5 responses on “Over the Hump to the Brothels in Pahrump”