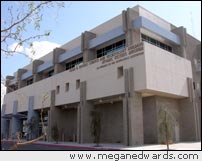 People like to watch stuff blow up, and nowhere in the world is there more proof of this fascination than Las Vegas. Hotel implosions — even after the terrorist attacks of 9/11 made them politically incorrect — still draw ogling crowds. But they weren’t the first big bangs that lured curious observers to southern Nevada, and they definitely weren’t the largest. That distinction belongs to the mushroom clouds created by atomic bombs detonated in the 1950s at the Nevada Test Site.

Back then, I learned when I visited the brand new Atomic Testing Museum, Las Vegas had the catchy nickname “The Up and Atom City.” Having lived here in the age when Las Vegas is defined by “Sin” rather than nuclear fission, I was happy to learn more about a side of local history that has nothing to do with Bugsy Siegel and the Rat Pack. Since I’ve lived here, I have met a number of people who used to work at the Test Site, and the new museum provides a well-organized, hands-on, multi-media view into what went on there in the second half of the twentieth century.

The museum occupies 8,000 square feet in the Rogers Building, which is on the campus of the Desert Research Center on Flamingo Road just east of the Strip. The ticket booth is a replica of a guard station at the Test Site. General admission is ten dollars, which includes a nice guide to the exhibits. Inside, a friendly docent who used to work at the Test Site welcomed me to the museum and told me I shouldn’t miss the movie that starts every fifteen minutes in the “Ground Zero Theater.” I had about twelve minutes to go, so I took my time moseying through the Entrance Gallery, the Atomic Age Gallery, and the Atmospheric Testing Gallery.

While no expense has been spared on well-edited audio and video programs throughout the museum, there’s also no shortage of primary source material and a wide variety of genuine artifacts. These aren’t limited to hardware from the Test Site itself, but also include items that reflect the impact of atomic testing on popular culture: a Kix cereal box advertising the “Kix Atomic Bomb Ring,” a book titled “Atomic Cocktails: Mixed Drinks for Modern Times,” and the sheet music for Tom Lehrer’s song, “The Wild West is Where I Want to Be.”

When the countdown clock next to the door of the “Ground Zero Theater” told me it was time for the next show, I entered the chamber, which is designed to look like a concrete bunker. The film, an overview of the programs conducted at the Test Site, includes interviews with scholars and people who worked there. The most memorable part of the show, however, is the footage of explosions, which are enhanced by earthquake-like rumblings that make the benches shake.

More exhibits illustrate the underground nuclear tests conducted at the Test Site in the 1960s, and another theater constructed out of a real grain silo from an experimental farm has a multimedia presentation explaining what went on there. Two “Stewards of the Land” galleries have exhibits about geology, archaeology, endangered species, and Native Americans. The last gallery has a piece of the Berlin Wall and a steel beam from the World Trade Center on display, concrete illustrations of the Cold War and the Test Site’s continuing role in counterterrorism efforts.

While I can’t say that spending half a day immersed in artifacts and documentation reflecting humankind’s tendencies toward self destruction is as much fun as checking out Liberace’s costumes or looking at Popemobiles, the Atomic Testing Museum is worth more than one visit. Its galleries reflect a facet of Las Vegas history that — as debates about “downwind” effects and storing nuclear waste at Yucca Mountain continue — is still being written.