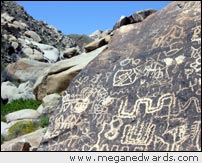 “There’s nothing old in Vegas.” It’s one of the most oft-repeated stereotypes, even though the city is proudly celebrating its centennial this year. Like all stereotypes, it’s contains an element of truth that can’t be denied by anyone who’s ever watched a world-class hotel get the “Independence Day” treatment. And it’s also true that huge expanses of suburbia were howling desert just last week. 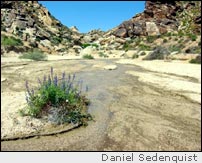 Lupine blooming at the canyon’s mouth

But, as any blonde who went to graduate school can tell you, stereotypes lie. There’s old stuff in Vegas, and I’m not talking about the people holding down seventeen bingo cards a game at the Klondike. I mean stuff so old you have to use a Greek word to talk about it. Yes, Las Vegas has archaeology. 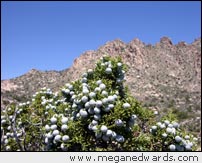 While there are ancient remains within Las Vegas itself, some of the most spectacular evidence of pre-Bugsy habitation lies a little outside the urban sprawl. One such place is Grapevine Canyon, a natural gorge on the side of Spirit Mountain (also known as Newberry Peak) not far from Laughlin. A trip there from Las Vegas can be made in as little as half a day. I took Highway 95 south through Searchlight to Highway 163. Heading west (toward Laughlin) for about ten miles, I looked for the Grapevine Canyon turnoff, which is well marked.

The parking lot lies at the mouth of the canyon, and it’s a short walk up the side of the sandy stream bed to the gorge’s entrance. This year, thanks to the extra rain, the stream is large enough to create waterfalls, and the wildflowers are still abundant.

What is it about petroglyphs? If they were newer, we would all denounce them as graffiti, but since they’re old and, in most cases, defy interpretation, we revere them instead. They’re beautiful, these ancient etchings on the slowly eroding granite. Most are abstract designs, but some are clear representations of bighorn sheep, and maybe even a person or two. There are hundreds, perhaps thousands on the canyon walls. It’s a generally accepted view that they mark the way up Spirit Mountain, a peak important in the creation myths of the ancient Mojave peoples. Newer carvings cover older ones, and a clearly recent addition says “HI.” Time marches on. 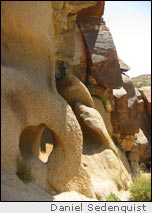 Instead of retracing my steps, I decided to head back to Las Vegas by way of Christmas Tree Pass. It’s a well-maintained dirt road that eventually ties in with Highway 95 south of the town of Cal-Nev-Ari. Skirting the south side of Spirit Mountain, the road winds through several life zones, and once again, the wet winter has created a desert wonderland. I was especially enthralled by a wild cucumber vine enmeshed in a juniper tree. 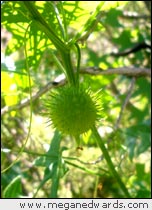 Soon, the high temperatures of summer will make field trips to places like Grapevine Canyon and Christmas Tree Pass less pleasant for hiking, but right now they’re one more reason I love living in Las Vegas. These still-wild places are right nearby, beckoning silently with their beauty and ancient mystery.