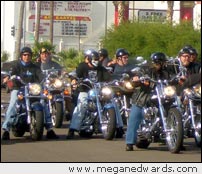 Eighty thousand motorcycles. That was the number bandied about by the press, but I had a hard time imagining what it meant in concrete terms. It’s gotta be at least a couple of football fields full, I figured, and that thought was enough to inspire a journey to Laughlin the fourth weekend of April. It was time for the 23rd Annual River Run.

I’d been wondering about the River Run ever since the gory evening back in ’02 when the Hells Angels and Mongols exchanged gunfire inside Harrah’s. That didn’t make me want to rush down there the next year, but now some time has passed without further violence. From what I could gather in the newspaper and online, the River Run isn’t really about gang warfare. It’s about bikes, which, for most of the over-forty crowd that can afford to buy and maintain them, is more about beer and babes than it is about bullets. 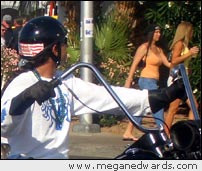 Checking out the scenery

I had been trying to imagine all those motorcycles in visual terms, but the minute I arrived at the north end of Laughlin’s main drag, I realized it was pointless. The real way to measure the magnitude of the River Run is in ROAR. Forget about talking. Yelling is the only thing that will get your message across, and the ROAR doesn’t let up, even when you can’t see where it’s coming from. The ROAR is everywhere.

It’s loudest on Laughlin Boulevard, of course, the mini-Strip that parallels the Colorado River on the Nevada side. I’m not up on the correct terminology, but barely tamed vehicles I would call “choppers” were revving up at every intersection, mindful of the red lights only because of the two-wheeled Metro cops among them. The effect was parade-like, and the sidewalks were jammed with onlookers. 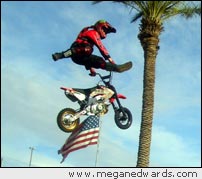 In addition to the activity on the boulevard, there was lots going on in the casino parking lots, where tent cities housed merchants selling not only extreme motorcycles but also T-shirts bearing thoughtful messages inspired by the classic “If You Can Read This, the Bitch Fell Off.” Reflecting the increased number of female riders, there were plenty of messages appropriate for ladies, too, like “This Bitch Owns the Bike,” and “Life is Better with Big Jugz.” In addition to tasteful merchandise, one enclave was pulling in crowds with a daredevil show featuring several guys doing motorcycle acrobatics on curved ramps and inside a big metal see-through ball. 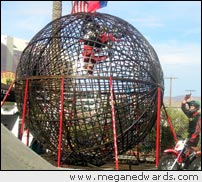 As Friday afternoon wore on, the party atmosphere thickened palpably. More hands were holding beer cans, more babes were bulging out of bikini tops two sizes too small. More cops were roaming the streets, and a 6:00 p.m. youth curfew was obviously being enforced. Tempted as I was to experience the River Run by night, I decided it was time to escape the ROAR for the relative quiet of Las Vegas. Next year, though, I’ll come prepared. Like maybe with a skimpy tank top that says, “This is Better with Ear Plugz.”

Click here for Linda Lou’s report about the 2008 event!