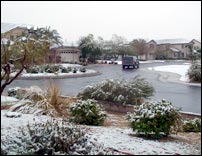 It doesn’t take much to describe the weather in Las Vegas. There’s hot, really hot, and #@!*!$%# hot. That’s pretty much it, right? Well, no. That’s just what the rest of the world thinks. Once you get here and hang around for a few months, you find out there’s a bit more to the meteorology of the eastern Mojave.

For starters, it gets cold in the winter. Not #@!*!$%# cold, but chilly enough to prevent you from growing an orange tree, and definitely brisk enough to justify installing a fireplace and owning a genuine winter coat. It actually snowed in the Las Vegas valley last winter and the winter before. The blanket of white was short-lived, but there was enough snow for a few dozen snowmen and a little sledding before it all melted off.

A word of caution from the Southern
Nevada Flood Control District

Another fact about Las Vegas weather is that it never rains. It pours. The monsoons occur mostly in the summer, but rainfall in the winter is not uncommon. Here’s how it works. Rain begins. Five minutes later, supermarket parking lots are so awash that cars are floating away and firemen are carrying out swift-water rescues at major intersections. Because many people do not believe that such rapid flooding is possible, there are public service billboards all over town warning of the dangers of driving into puddles of unknown depth. I think you really have to see Las Vegas flooding to believe it. Then, when everything is parched and dry again — which can happen as quickly as an hour or two after a flood — you won’t believe it’s possible, even though you just saw it. 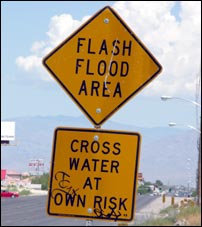 Oh, and there’s wind, sometimes at the same time as the rain. I was driving along Las Vegas Boulevard a few months ago when this combination suddenly enveloped me with impressive force. A street sign blew by, along with several palm branches, the contents of some garbage dumpsters, and other large debris of unknown provenance. It was more than a little alarming.

Wind without rain can be formidable, too, and all it takes is one dust storm to understand why most Las Vegas backyards have walls around them. Wet or dry, the desert is always looking for a chance to reclaim lost territory. Without a solid barrier around it, a garden can easily vanish in just one storm.

But here’s the thing. Most of the time, weather in Las Vegas is fairly benign. Winter days are rarely cooler than 50° F, and while summer days are hot, shade makes a twenty-degree difference. Also, low humidity makes the heat feel less severe, and there is nothing more deliciously sybaritic than swimming after dark on a hot summer night.

I should mention the other two seasons, even though they can be so short some people claim they don’t exist at all. Although fleeting, spring in the desert is enchanting, whether you’re enjoying a backyard in the suburbs or wildflower-covered slopes on the edge of Lake Mead. The same goes for autumn, when cooler temperatures make walking in places like Red Rock Canyon a delight. Last year, both spring and fall lasted for several weeks.

I have a rule. I don’t go out into the desert in summer. It’s too hot, and it’s the most likely time for thunderstorms and flash floods. The last thing I want is to be caught out in a dry lake bed when it starts to rain. They don’t call them lakes for nothing.

Last week, I broke my rule. I was seduced by three scientists and an SUV with four-wheel drive. The scientists, a physicist from L.A., a climatologist from Germany, and a geologist from South Africa, wanted to go to Mesquite Dry Lake, which is south of Las Vegas not far from the California border. There are large gypsum crystals there, they said, worth checking out. I hesitated when they invited me along, but then threw caution to the wind.

Sure enough, it was way too hot for me to enjoy myself. My head was sweating under my hat. I picked up an interesting rock, and it burned my hand. And then the thunderheads began to form. 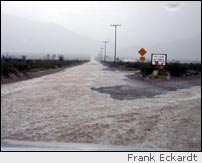 I got back to Las Vegas without serious damage to my person or vehicle, but I feel lucky. We beat the storm back to the highway, but the road behind us was fast becoming a raging torrent. All too easily, I could have been stranded in the howling wilderness for an unpleasantly long, hot, muddy time.

The experience reminded me that the desert is indeed a powerful place, and I’ve decided my rule about not going out in it to play in July and August is worth obeying. Summer is best spent in the shade of a palm tree and, when necessary, in an air conditioned interior.

Which brings me to one last observation about Las Vegas weather. There are lots of people here who don’t pay attention to the weather at all. They don’t have to. They go from their climate-controlled house to their climate-controlled car to their climate-controlled place of business without ever experiencing the real out-of-doors for more than five minutes at a time. I myself was spending a day in this mode a couple of weeks ago when the air conditioner in my car stopped working. It happened to be the day when the official temperature reached 117° F, making it one of the hottest days ever on record. I was stuck in traffic on Flamingo Road, and for a fleeting moment, I freaked out a little. I thought I might actually cook. It was a little reminder that even though it’s possible to ignore the weather in Las Vegas, it’s wise to respect it. I never go out without water in my car, even in winter.