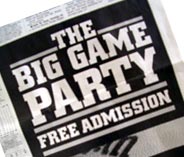 Super Bowl has come and gone once again, leaving millions and millions of dollars behind in the city that will never be its host. It’s amazing to me that Las Vegas reaps all the benefits of the most popular football game of the year without contributing a cent to its production. And not only is Sin City exempt from underwriting any Super Bowl costs, the Las Vegas Convention and Visitors Authority (of “What Happens in Vegas” fame) isn’t allowed to buy even one minute’s worth of advertising during the television broadcast. The National Football League is unwavering in its stance that any connection with Las Vegas will somehow sully its pristine reputation.

And so it goes, year after year in the city that routinely draws far more fans than whatever venue is actually hosting the game. Las Vegas keeps raking in the money on creative betting opportunities and jolly parties, and the NFL keeps making rules about how big the casinos’ television screens can be and how people may be charged for their beer. And don’t put the words “Super Bowl” in your advertising if you don’t want to get slapped! The secret code is “Big Game.” With rules like this, the NFL contends, the decadent practice of betting on football will surely be stamped out.

Since it is impossible to believe that the NFL genuinely thinks that sports betting will be made extinct by placing sanctions on Las Vegas advertising, I have come to the conclusion that their silliness is really the result of jealousy. All that lovely moolah flows into Las Vegas every Super Bowl weekend, and the NFL can’t get their paws on any of it except maybe what they get from licensed souvenirs. I think I might feel testy, too, if I produced such a marvelously successful gambling opportunity, and I couldn’t collect at least a piece of the action. But the NFL made their deal with advertisers, and advertisers want that big ol’ nationwide audience. I can’t believe they care whether their viewers are watching in church or making a bet.

So raise a glass to the NFL. The Super Bowl comes our way completely free, bringing close to 300,000 visitors and $200 million dollars along with it. It might be polite to says thanks with an ad, but darn! We’re not allowed.