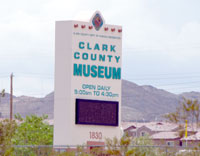 “There’s nothing old in Vegas.” How many times have you heard it?” “Everything gets blown down.” Well, it’s true when it comes to the Stardust, the Dunes, the Landmark, the Desert Inn… Yeah, a lot of stuff in Vegas really does bite the dust rather explosively.

But not everything. Some of it gets moved to the Clark County Museum, which I finally got around to visiting a mere seven years after I decided to call Las Vegas home. I was embarrassed that I had toured the new Springs Preserve but had ignored its humbler antecedent. To set things straight, I drove down Highway 95 the other day and took the exit for Wagonwheel Drive. [Map]

Dang! Now I almost wish I had gone to elementary school here! I would have found out years ago about this utterly captivating place. Not only does it have a museum building full of engaging exhibits about the history of Southern Nevada, it also has a dozen other structures scattered around its grounds. A trail winds through a “ghost town” comprised of a jail, a general store, a blacksmith, and a toll house. In between are all sorts of other artifacts including old trucks and mining equipment. You can go inside or peer into all the buildings, which are not models. They’re all real Wild West structures that have been brought to the museum and fixed up a little, but not so much that they look like Disneyland. In fact, I found it rather delightful that I had to watch out for the odd rusty nail sticking up through the floor boards. These old cabins are the real thing, and real things aren’t always smooth and scrubbed.

Then, as if the Ghost Town Trail weren’t enough, there’s Heritage Street, a block-long pedestrian-only mall lined with five houses, a print shop, and an exhibit called “Mobile America” that includes a vintage trailer and a motel cabin.

I would have loved this when I was in third grade, and even in my currently jaded state, I was enchanted. Each structure is fully furnished in the style of its heyday, and even the cars in the carports and driveways are the right age. You can go inside each (air conditioned!) building and wander through. Recorded messages begin when visitors arrive, providing background about the original owners and the furnishings. Labels provide more information about old appliances, mementos from the atomic testing era, the building of Hoover Dam, and all sorts of other bits and pieces of Clark County’s checkered past. The effect is a kind of crazy quilt look at Las Vegas history, which goes quite well with the excellent exhibit of quilts currently on display in the main museum.

Oh, and the trains! Not only is there a steam locomotive on display, but there are also three cars open to visitors. A baggage car, a box car, and a caboose sit next to a nicely preserved train depot full of old railroad memorabilia.

In the fall, Heritage Street and the ghost town provide a nice setting for a Halloween event, and in December and January, each structure gets decked out in holiday decorations appropriate to its decade. In the spring, the museum hosts the three-day Native American Arts Festival, and the gallery in the main museum features changing and traveling exhibits year round. I’m on the mailing list now, and glad to know I’ll hear about what’s new. The Clark County Museum is now on my list of places worth multiple visits.

Okay, now get this. It costs $1.50 to get in! And only a buck if you’re a senior or a child! That’s 10% of what the Springs Preserve is charging, and even a fake flash flood doesn’t justify the difference. The Clark County Museum is worth a journey and worth revisiting. And judging from the “new” old buildings still sitting on blocks in the parking lot, it’s only going to get better as it preserves even more of southern Nevada’s past.