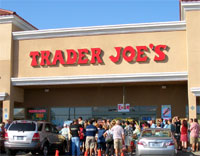 You might think that everyone in Vegas is out doing something Elvis-related today, the 30th anniversary of the King’s death. Around 75 Vegans, however, were out celebrating something much more mundane. I was one of the small throng present at the 9:00 a.m. opening of a new Trader Joe’s supermarket on the south side of town.

My excuse for attending a grocery store door-opening ceremony is that I was curious to see how many other people would be there. But the truth is, I’m really happy to have a Trader Joe’s nearby. Until today, I had to drive to Green Valley, a trip that seemed to get longer every time I took it.

At about a quarter to nine, a team of Hawaiian shirt-and-lei-clad Trader Joe’s officials welcomed the crowd. One of them then cut a leafy garland strung across the door, and the glass panels slid open. Suddenly 75 people felt like a horde, but we all swarmed past a display of potted hibiscus plants and on inside without knocking anything down. 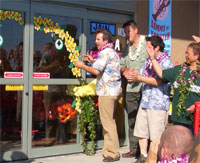 Trader Joe’s officials cut a
garland and open the doors

As I expected, the store is decorated in understated Polynesian style. The shelves are edged in natural wood, which always suggests that everything on them is healthy and organic. The aisles are wide enough for a couple of carts to pass each other without bumping, and the lighting is bright but not garish. Over the years, Trader Joe’s has perfected an ambience that makes grocery shopping remarkably pleasant, and they usually live up to their reputation for having good prices. To say I’ll be back is an understatement. I’ll be back so often, they’ll probably get to know my name.

Elvis and Trader Joe. I never thought of them as having much in common, but now they share an anniversary. Elvis, can’t believe you’ve been gone for thirty years. Joe, welcome to the ‘hood.