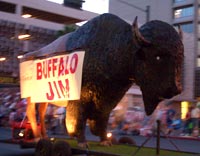 News of the death of James “Buffalo Jim” Barrier first came to me by email. I’ve long been a subscriber to former Las Vegas City Councilman Steve Miller’s e-zine, a rambling missive he sends out to what I imagine is an enormous mailing list whenever he has news or opinions about one of his pet topics.

While Steve’s topics range from rants against prostitution to announcing that he won’t let his teenage daughters go to Aruba because of what happened to Natalee Holloway, his ongoing crusade has been to put the Crazy Horse Too gentlemen’s club out of business. Buffalo Jim, whose auto repair business was the Crazy Horse Too’s next door neighbor, shared the same goal.

Whether or not Steve and Buffalo Jim were “best friends,” as Steve claims, I have no idea, but the gadfly emailer and the former professional wrestler had one important thing in common. Buffalo Jim was a major thorn in the side of Rick Rizzolo, and Steve Miller still is. Rick Rizzolo, who recently completed a year in prison, was the owner of the now shuttered Crazy Horse Too. Is he a mobster? He hasn’t been forced to wear a red “M” on his shirt, but the FBI investigation that finally resulted in his club’s demise revealed unsavory connections. If you ask Steve, of course, his answer might well be “Duh!”

For me, the Crazy Horse Too saga read like something that should be in a novel, and my distance from it gave Steve’s discoveries and allegations a fictional cast. After all, this is the “new, clean Vegas.” The mob was rooted out and chased off long ago, wasn’t it? It didn’t help that Steve Miller has a slightly crazed look in his eye that comes through even in photographs. His letters have the disgruntled tone of a person with ambition who feels he’s been unfairly marginalized. He seems a bit threatening, and I’ve often thought that I would prefer never to meet the man in person.

But now James Barrier is dead, and the police are saying it looks like he succumbed to “natural causes.” Suddenly, Steve Miller doesn’t seem crazy at all. Buffalo Jim was 55 and in excellent health, according to Steve. He was excited about moving his business to a new location. He didn’t use drugs. Would he check into a Motel 6 on Boulder Highway to off himself with a handful of Valium tablets? That really is weird.

Steve Miller reports that Buffalo Jim had received death threats. In his column today, Las Vegas Review-Journal writer John L. Smith says that he spoke with Buffalo Jim on Friday, and that Jim tried to reach him again on Saturday without success. Buffalo Jim’s daughters are convinced their father was murdered. If I were them, I would think the same thing. I do think it. It’s difficult not to.

I last saw Buffalo Jim at the Helldorado Days parade last spring. He was riding on his float, which featured a large black smoke-breathing buffalo. It was easily the best thing in the parade unless you prefer Mayor Goodman with an oversized martini glass. The crowd waved and whistled as Jim rode by, and every face wore a smile. Here was Buffalo Jim, our colorful hometown celebrity. “Buffalo Jim! Buffalo Jim!” Kids shouted.

Now Buffalo Jim is gone, and his death is a frightening mystery. What’s even more alarming is that it may never be solved. Las Vegas may be clean and new, but I can’t help thinking there’s still something old and rotten here.