Well, not entirely. A recent outing to Cashman Field to watch the Las Vegas 51s play the Sacramento River Cats convinced me that this town is desperately hungry to cheer for a home team. With a still-growing population of over two million in Clark County (including Las Vegas, Henderson, North Las Vegas and Boulder City), an eager fan base exists, but it will likely have only its fun, scrappy, minor-league baseball franchise to cheer for in the foreseeable future. That’s because major league sports remain wary of our legalized gambling institutions. 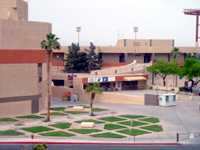 Not that the 51s aren’t entertaining. They are, even if you’re not a huge baseball fan, and they attract about 5,000 fans per game. Their mascot is a huge, fat, bluish-purple alien that probably didn’t train at Juilliard but dances with gleeful abandon anyway between innings. Seats are inexpensive and close to the field. Many local businesses buy season tickets that would cost thousands of dollars in a bigger stadium and they give them away freely.

I was lucky enough to be sitting in the T-Mobile seats along the first-base line. Every double play, every race to the bag was right in front of our eyes. The strikes thrown against right-handed batters were at our eye level and clearly evident, even without the ump’s call. It was a windy evening, the kind that probably would feel good in the baking summer heat, but we enjoyed watching it carry two long balls over the centerfield wall for home runs. The stadium is 25 years old, but it’s easily accessible just north of downtown, parking is convenient and cheap (only $3), and the food and beer options are very affordably priced.

Cashman Field was built in 1983 and named after “Big Jim” Cashman, who founded the first Cadillac dealership in Las Vegas sometime around 1915. His companies later played an integral role in the building of the Hoover Dam, and his family has remained involved in Las Vegas planning and city government ever since.

Known as the Las Vegas Stars from 1983 to 2000, when they were the AAA affiliate for the San Diego Padres, the 51s have been the AAA affiliate of the Los Angeles Dodgers since 2000. The team got its name from the infamous Area 51, which is located about 80 miles north of Las Vegas and is ground zero for UFO believers, conspiracy theorists and perhaps even a few grey beings from another world. The team logo includes a likeness of one of the Greys, the species of UFO alien that purportedly crash-landed outside Roswell, N.M., in 1947. Many locals believe the government secretly moved them to Area 51 for further study and research.

Photo by Eric J. Miller
An ominous cloud above Cashman
Field suggests the new owners
should think twice before changing
the 51s’ name…

Sadly, Mandalay Baseball Properties sold the 51s on March 24, 2008, to the Stevens Baseball Group, and the new owners have announced their intention to change the name of the team for the 2009 season.

But there’s still hope for fans of aliens and baseball alike, as the Stevens group is rumored to be considering opening the naming process to a public vote. In the meantime, in a city known for neon, Elvis, the Rat Pack, dancing girls, poker chips and its mob past, one of our only home teams proudly bears its extraterrestrial name, and remains the most fun semipro sports game in town.