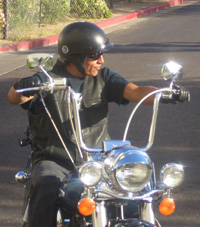 Several weeks ago, a representative from the Clark County Library District asked me to organize a series of panel presentations for aspiring writers as part of its “Be the Next Bestselling Author!” program. Specifically, she wanted to schedule a panel in Laughlin, Nev., on April 26 to coincide with the Laughlin River Run, the annual motorcycle event that attracts thousands of bikers from all over the country. I jumped at the chance.

Generally I don’t care to dip even my big toe into waters so heavily laden with testosterone—God knows I wouldn’t go near a football—but I do find the biker culture intriguing. My sister has a Harley, and I’ve dated a couple of guys who ride. I find comfort in the protection of big, beefy men who could kick the crap out of someone if they had to.

Immediately I called my friend Donna. “Road trip!” I exclaimed.

Donna’s a blast to hang out with and, like me, she lives for girl talk so the hour-and-a-half drive flew by. Laughlin is a neat little city a hundred miles south of Las Vegas in that pointy part of Nevada wedged between California and Arizona. In 1964 a businessman named Don Laughlin bought a bunch of property there and that’s why the place is called Laughlin. Take that, Dolly Parton and you other underachievers with only a theme park bearing your name. 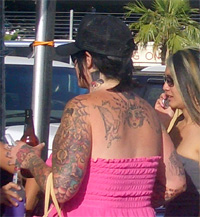 After my presentation at the library, Donna and I strolled along Casino Drive amid a swarm of heavily tattooed humanity. How do they do it? I wondered. I’m too fickle—it’s a struggle for me to decide between paper and plastic—and my commitment issues run way too deep to etch an image into my skin that I’m sure to hate a week later.

Outside the casinos lining the banks of the Colorado River hundreds of vendors offered every kind of commemorative T-shirt and shiny bike accessory you could imagine. The beer selection, however, was terribly disappointing—nothing darker than Budweiser. I forced myself to drink a specially branded River Run Lite but didn’t feel good about it, then leapt with glee when we wandered inside the Colorado Belle casino and found a brew pub.

“Mmmm … nice,” the biker dude sitting next to me cooed as I waited for the bartender to finish pouring my stout. I turned with a flirty smile and then realized his commentary was not directed to my good looks, but to the barbecued chicken platter in front of the hefty gentleman on my other side. That’s OK, I’m too Private Benjamin for him, anyway, I reasoned. 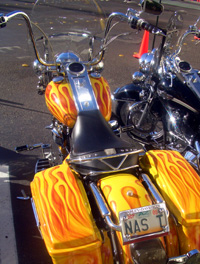 Donna and I found a couple of seats under a tarp and settled in to enjoy some good old classic rock. We danced to “Sweet Child of Mine” with three cousins from Albuquerque and between the bands’ sets took in some serious people watching.

“Check out this guy,” Donna said, pointing a manicured finger at a 7-foot-tall, bare-chested Mr. Clean with freakishly developed pectoral muscles. “I think I’ve seen him floating over Fifth Avenue on Thanksgiving morning,” I told her.

One woman’s outfit reminded me of a gift I received from an admirer last year—a black halter that laced up the front, exposing more than a hint of cleavage. Where the hell will I ever wear this? I wondered at the time. Now I know for next year.

And we will be back next year—what a great place to let loose! Overall I felt a playful spirit and an air of acceptance that, frankly, Donna and I might take a lesson from. As the only two people in a crowd of 60,000 fretting over the wind messing up our hair, I have to ask, Who are the freaks?

Click here for Megan’s report about the 2005 River Run.

14 responses on “Lettin’ Loose in Laughlin”