Flashing and glittering next to Paris Las Vegas on the east side of The Strip at Harmon Avenue, the Planet Hollywood Resort and Casino looks like a sophisticated testament to somebody’s brilliant business acumen. But although Planet Hollywood seems to bask in long-standing confidence, the property hasn’t always looked this smart.

The first resort to reside on the corner that Planet Hollywood now occupies opened in 1962. Built by the owner and creator of the popular dice game Yahtzee, it was known initially as the English Tally-Ho Motel. The Tally-Ho failed to generate much of a following, however, and a series of other motels didn’t fare much better.

The next major event on the much-developed spot was the opening of the Aladdin Resort on April 1, 1966. Over the 31 next years, the property had a series of owners, periodic renovations, several temporary closures — and a wedding uniting Elvis and Priscilla. Serious financial mismanagement in the 1990s led to the resort’s closing in November 1997, and on April 27, 1998, the Aladdin came tumbling down in a spectacular and heavily video-taped implosion, leaving only the nearly brand-new Performing Arts Center standing.

A new Aladdin soon arose from the dust of the old. The new “grand opening” took place on Aug. 17, 2000, a few months after I took up residence in Las Vegas. I made a point of attending the event, which also drew legions of locals, visitors and celebrity guests like Barbara Eden, who still looked remarkably fetching in her “I Dream of Jeannie” outfit.

But not even Jeannie could rescue the mess that came next. Despite public invitations to the gala opening, the building was only partly finished when hundreds of would-be overnight guests started arriving. Citing some remaining “fire code issues,” the building department held up the opening of the casino and hotel rooms, which meant that the shopping mall, then known then as Desert Passage, quickly filled to overcapacity with all the people who just wanted to gamble or check into their rooms.

Claustrophobic conditions, a shortage of restrooms, and no food or drink available at any price soon inspired impromptu shoving matches and even a couple of fistfights. What should have been a jolly party soon devolved into the nastiest sort of general chaos. I escaped and went home, but many out-of-towners found themselves stranded on the sidewalk for much of the night. In fact, the hotel didn’t open until late the next morning. The opening night fiasco left guests with unpleasant memories and little reason to think of the new Aladdin fondly.

The Aladdin’s tough times continued. Its Moroccan costumes, “Arabian Nights” architecture and security guards dressed like Algerian soldiers didn’t fare well in the anti-Arab climate that blazed up after the terrorist attacks of 9/11. Coupled with questionable business practices and several major design flaws, this general unpopularity put the property in irreparable financial distress, and on June 20, 2003, the Aladdin was sold to the Starwood Resorts and Planet Hollywood. 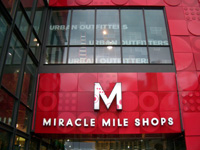 The transformation into Planet Hollywood was slow, and for a while it looked like the only change was the addition of a large “PH” on the exterior of the building. But then a glitzy new façade appeared on the front of the building, and hip new renovations popped up inside. By the time Planet Hollywood had its official grand opening on Nov. 16, 2007, Desert Passage has metamorphosed into the Miracle Mile Shops, and the casino sported a fabulous new “LA” look. 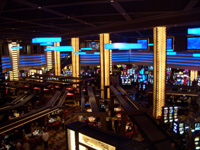 Columnar light displays in the
casino are reminiscent of the real
Miracle Mile.

In the last six weeks I’ve visited Planet Hollywood at least a dozen times. That’s probably more times than I went during the whole five years of its previous incarnation. Given the immense amount of politically incorrect kitsch they had to overcome, I am nothing short of amazed that Planet Hollywood’s designers and architects managed to create an ambience with such appealing style and sophistication. It’s almost as though someone rubbed a magic lamp and wished for a whole new casino. The dark reds, brilliant yellows and other intense colors found throughout the property create a sense of elegance and grown-up excitement, while the furnishings hint at a barely whispered “something’s happening here” insider secret. 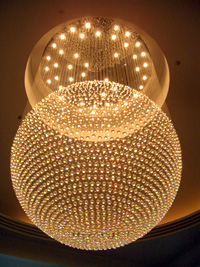 Chandelier made out of hundreds
of individually suspended crystals

I’m especially enchanted with the crystal chandeliers. They come in all shapes and sizes, but the ones I like the best are huge glittery spheres created by hundreds of individually suspended crystals. Those chandeliers are currently among my Top-Five-Things-to-See-in-Vegas, a constantly changing list I maintain in case any out-of-towners ask for my opinion. Also worth checking out are the columnar light displays in the Planet Hollywood casino and Miracle Mile shopping mall. They remind me of the skyscrapers along the real Miracle Mile in Los Angeles. Another cool feature is the chic, polished black stone floor that has replaced the ersatz cobblestones in many of the common areas.

Judging by how difficult it can be to find a spot in the self-parking garage, I’m not the only local who likes the new Planet Hollywood resort. Unlike Desert Passage, which earned itself the unenviable nickname “Deserted Passage” before it closed, the new shops, restaurants and theaters are usually teeming with visitors.

My best tip: Grab a meal or have a drink on the patio of Trader Vic’s, which is located at the front of the property, and watch the construction drama going on at CityCenter across the street. It’s a round-the-clock reality show and an interesting accompaniment to Trader Vic’s great food and ambience. Because it hovers right above the sidewalk, this patio has also become my new favorite place to people-watch on The Strip. In fact, it is a great spot to check out the scores of little black dresses that can be seen parading into the new Planet Hollywood.

4 responses on “Getting to Planet Hollywood”