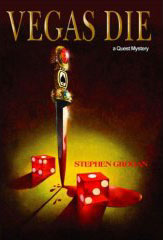 As a Las Vegas author and longtime local, I’m frequently annoyed by books and movies that use our fair city as a backdrop. Writers fly into town for a long weekend, jot down some notes, and jet back to their keyboards in Cleveland or St. Louis or wherever, thinking they understand us. They’re wrong. And it shows in their writing — as glitzy as The Strip and just as superficial.

Hell, even after all this time, I’m not sure I really understand us. In some ways, we’re Everytown, USA; in others, we’re like no place else on earth. Capturing that juxtaposition is tricky. Most writers can’t pull it off.

That’s why I was pleasantly surprised by the new mystery novel “Vegas Die.” Author Stephen Grogan clearly “gets” Las Vegas. After talking to him in person, I know why. For starters, he’s lived here for eight years. Even better, he works in the gaming industry as an executive with one of the top game design companies in the world. Prior to that, he published the “Grogan Casino Report,” an industry magazine that tracked the expansion of casino gaming nationwide. So the man has credentials. In spades.

The book itself is more fun than the roller coaster at New York – New York (and lasts a lot longer). Someone is killing off the old mobsters of Las Vegas. And the mayor, a former defense attorney who once represented known gangsters, becomes the No. 1 suspect when he discovers the body of an ex-client in the trunk of his car. Mix in an over-the-top cast of card counters, Elvis impersonators and assorted corpses (shot, sliced and set on fire) and you’ve got the ingredients for a sizzling summer page-turner.

Clichés? Sure, but Grogan gives a playful spin to the story that lets readers know he’s not only in on the joke, but orchestrating it.

Even Las Vegas’ flamboyant real-life mayor, Oscar B. Goodman, has weighed in with his opinion.

“I don’t know if Mayor Goodfella is believable,” he said, tongue in cheek. “After all, I’m quiet and unassuming, and I know for a fact we never had mobsters in Las Vegas.”

But wait, there’s more. Grogan keeps the reader’s attention after the whodunit ending by offering a treasure hunt for a dagger hidden somewhere in metropolitan Las Vegas. Clues to the dagger’s whereabouts are buried within the pages of the book. The first reader to solve the puzzle can keep the dagger or redeem it for $25,000 cash.

“My goal is to provide an interactive experience to make you read ‘Vegas Die’ twice,” Grogan told me. “Once for the mystery, once for the money.”

Readers from around the world are already flocking to Las Vegas in pursuit of the dagger. Grogan has heard from hundreds of them via e-mail and from the publisher’s Web site.

“These folks take their games seriously,” Grogan said. “A doctor from Canada is using cryptology methods to try to decipher the card symbols in the book. The only advice I can give everyone is: Beware of the path you follow. Who says all clues lead to the dagger?”

Those who go in search of the prize – the “Questors” — need to register at QuestMystery.com to learn the ground rules. (“Like don’t dig up the author’s backyard,” Grogan joked.)

Sales have been brisk since the book’s launch in late February; about 1,500 copies have been sold, thanks to media exposure and word of mouth. Still, the treasure hunt is a calculated risk, something Las Vegans know plenty about.

“I definitely want someone to find the dagger,” said Grogan. “But not too quickly.”

Of course, the best laid plans sometimes go on “tilt,” especially in Sin City. I can see it all now: As Questors scour the town, a homeless man stumbles upon the dagger while picking up tin cans. Not knowing its true worth, he pawns it for 10 bucks, and the dagger embarks on a different journey than the author intended.

4 responses on “Find That Dagger!”