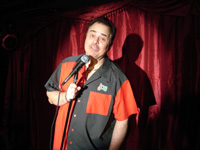 I often tell people that when I first came to Las Vegas, I was so miserable even Jesus would cross the street if he saw me coming. I arrived here alone after a terribly painful divorce and had no job, no family, no friends—nobody. I was so lonely I offered to make the cable guy a sandwich after he hooked me up just so he’d stay and chat a while.

Though I would have preferred to sulk at home weeping over my video of Princess Di’s funeral, I forced myself to explore the Vegas neon nightlife. I checked out music venues and started hanging out at Boomers, a bar on the west side of town that had open mic comedy every Sunday night in the back room. After several weeks of watching the comics do their stuff, a voice in my head told me to go ahead and sign up for stage time. Why not? I thought. I had tons of public speaking experience from years of working as a corporate trainer and no one knew me here anyway, so what was there to lose? It would be a diversion from my misery.

Let me tell you, performing stand-up comedy is one nerve-racking way to spend your time. You have to present yourself to a roomful of people and not only hold their attention, but make them laugh. Out loud. Not smile or chuckle under their breath; snickers and soft tee-hees won’t cut it. No, you have to come up with something so hilarious they’ll actually emit audible sounds. Hearty guffaws are the goal.

Despite excruciating anxiety, I did well my first time at Boomers and afterward a woman in the audience asked if she could book me for some other stages around town. I performed quite regularly, and though my neck would predictably blotch up, I never did develop a sudden case of Tourette’s syndrome and randomly shout obscenities and racial slurs as I had feared. Or lose total control of bowel functions. Comedy is a primarily a man’s game to play, and I always appreciated how the guys were so nice to me. And, thank God, I never once had to deal with a heckler.

It’s been about a year since I last did a set. I could say I’ve been busy working full-time and finishing my book … blah, blah, blah … but you always find time to do the things you really want to do, and the truth is the open mike stages seem to have deteriorated over the past few years. Shows haven’t been starting on time and there’s not much quality control. But I’m a fussy old bat, especially compared to the young guys who run these stages— and out of the goodness of their hearts. God knows they don’t make a cent hosting open mics, and I have nothing but appreciation for their efforts. But it takes a lot out of me to put a decent set together, and I got to the point where I felt it was no longer worth it.

I’m starting to get the itch again, though, thanks to one of my old friends. Joe Lowers was one of the first comics to befriend me at Boomers and I learned a lot from him. Sometimes he critiqued the other comics in my ear as we sat together in the back of the room. “This guy’s talking to those girls up front and ignoring everyone else,” he’d say. “You can’t do that. Look at where he left the microphone. Always take the mike off the stand and move it behind you. First thing.” When Joe offered advice, I would cling to his every word.

Joe is now the featured performer every Thursday and Friday night at the Las Vegas Comedy Show at the Royal Resort, on Convention Center Drive, just off the Strip. I caught him a couple of weeks ago in a nice little showroom off the lounge. The mere thought of him makes me smile. Picture a demented, middle-aged kid in shorts and a bowling shirt dancing like a maniac to “Rock Lobster.” Playing heavily off the audience, Joe appears to ad lib his entire act, with no fear of looking like a complete idiot. Everything he does cracks me up, no matter how shamelessly inane. 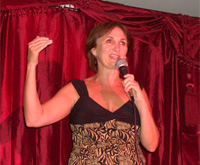 Photo by Megan Edwards
She did it! Linda Lou onstage at
the Royal Resort on July 10

We had a chance to talk a little that night. I told him his act inspired me to think about returning to the stage, but I shared my reluctance. “I swung by Boomers last Sunday night and nothing was going on. The open mic scene doesn’t look too promising these days.”

“So perform here,” was his reply.

In the comedy world, conditions are rarely favorable. You need enough people in the crowd, a decent sound system, and no peripheral distractions—to say nothing of my personal requirements, which include a good hair day, a cute outfit, an effective pre-performance meditation and perfect planetary alignment. The chances of all that coming together are pretty damn slim. Still, how could I refuse an offer to perform on a good stage?

So now I have to literally get my act together before Thursday, July 10. Yikes. My friend Timmy D tells me I have “more nerve than an achin’ tooth,” but if there’s one thing that scares the crap out of me, it’s doing stand-up. I probably shouldn’t say that—I don’t want to jinx myself.

9 responses on “Stand-Up Comedy: It’s Supposed to Be Fun, Right?”