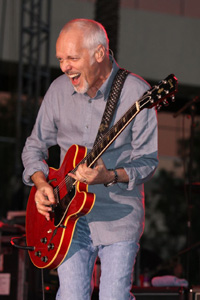 It’s been almost 33 years since I watched Peter Frampton perform to a sea of Levis and Earth Shoes at the State University of New York at Plattsburgh, my alma mater nestled in the tundra 20 miles from the Canadian border. I was just a couple of months into my freshman year and had no idea a recording from that concert would be included in the biggest-selling live album of its time: “Frampton Comes Alive!” During the spring semester after its release in January 1976, and for several semesters afterward, you’d hear his songs flowing from every dorm window on campus. Peter Frampton was a freakin’ god.

Half out of curiosity and half from my undying love for the music I grew up with, I eagerly looked forward to Frampton’s July 11 show at the Red Rock Casino Resort Spa. Frampton came out of the gate strong with Junior Walker’s R&B classic “Shotgun,” followed by Stevie Wonder’s “Signed, Sealed, Delivered.” The collective energy soared as Frampton enthusiastically indulged us with his hits; heads bobbed during “Show Me the Way” and couples swayed to “Baby I Love Your Way.” Selections from his recent instrumental work “Fingerprints” received a polite reception, but as with all classic-rock shows, the audience had come to hear the tunes from decades long gone. 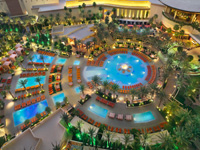 Courtesy of Station Casinos, Inc.
Aerial view of a perfect place
for a summer concert

The poolside venue at Red Rock — “The Yard,” as they call it — is a fantastic place to see a show. The stage is visible from almost anywhere, and while concerts held here are advertised as standing room only, there are plenty of lounge chairs and concrete surfaces on which to relax, or you can splurge for a cabana. I much prefer this setup to theater-style seating, where inevitably you’re stuck behind the one dopey chick that has to dance to every damn song and so your only glimpse of the performers is between her gyrations. You know who I mean. As luck would have it, my Italian hunk-of-man companion and I happened to position ourselves near an air guitar virtuoso in a Hawaiian shirt who was almost as entertaining as the musicians we’d paid to see.

What a great time! One of the many things I love about living in Las Vegas is that I always feel like I’m on vacation; the resort atmosphere at The Yard at Red Rock is a far cry from swatting mosquitoes on the lawn at the Saratoga Performing Arts Center in upstate New York. With the moon peeking through palm trees on a beautiful summer evening … hearing the music of my youth … the joy of watching Hawaiian Shirt Guy — I had to pinch myself. I actually live here! How lucky I am. 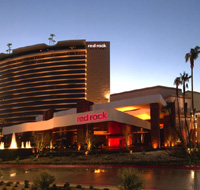 Overall the crowd was just as I had expected; almost everyone seemed to lie a few years on either side of 50. I didn’t notice anyone who looked to be under 40, and was surprised to see a few people who appeared to be pushing 80. No kidding! Or maybe they were actually a lot younger and the decadence of the 60s lifestyle had taken a particularly harsh toll; you never know.

If I had one complaint (you knew this was coming), it would be the beverage selection, which had much to be desired. I’m an admitted beer snob, and though I can force down a Corona in an emergency, it pained me to pay eight bucks for it. “Next time we’ll have to have a couple of drinks in the casino beforehand,” I said to my friend Joey D, and as the words left my mouth I realized I have yet to outgrow my appreciation for a pre-concert buzz.
.
As expected, to close the show Frampton offered up “Do You Feel Like We Do?” featuring his famous “TalkBox,” a gadget that produces his trademark “talking guitar” sound. Back in 1975, we all went wild over it; we’d never heard anything like it. These days, however, it reminds me of the unfortunate consequences of a three-pack-a-day nicotine habit. That or Stephen Hawking: Rock Star.

For whatever reason, Peter Frampton hasn’t enjoyed the fan adoration that other rock icons have received through the years; I see no Frampton tribute bands advertised in the local entertainment magazines and I don’t recall ever hearing a cover band belting out a Frampton hit. He seemingly fell from grace as quickly as his star had risen. Was the public so unforgiving of his role in the 1978 cinematic bomb “Sgt. Pepper’s Lonely Hearts Club Band” that they forgot his rightful place in music history?

I feel kind of bad. “Fingerprints” went on to win the 2007 Grammy for Best Pop Instrumental Album, so it’s not like Frampton hasn’t done anything for us lately. Maybe it’s fitting that he ended the night with a spirited rendition of George Harrison’s “While My Guitar Gently Weeps.” I would never claim to be a music critic, so I really can’t comment on his musicianship. But I can say that besides giving us an energetic performance, Peter Frampton seems like a truly nice guy.