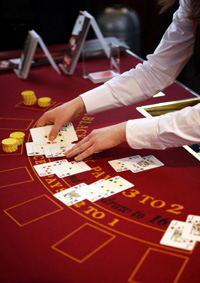 iStockPhoto/webphotographeer
Is that dealer really your friend?

If there’s one thing visitors can be counted on to ask us locals, it’s this: “How do you deal with the gambling?” It’s an obvious question, and a good one. Because in Las Vegas, unlike other gaming destinations that have sprouted up around the country, gambling is literally everywhere.

Besides the Strip’s mega-resorts, we’ve got neighborhood casinos like Sam’s Town, Arizona Charlie’s and Gold Coast scattered throughout the Valley. If you’re visiting your favorite watering hole, you can waste a few quarters or dollars at the bar-top video poker machines while hoisting a cold one. And here’s the real kicker: Convenience stores, laundromats, carwashes, even chain restaurants offer plenty of opportunities to try your luck while you wait. Believe me, you haven’t lived until you’ve played the slots at Blueberry Hill Family Restaurant while waiting for your giant double cream waffles.

So how do we deal with all the temptation to gamble? In the 27 years I’ve lived here, I’ve seen three basic strategies.

1. Ignore it. Plenty of residents never drop a nickel. Honest. They treat Las Vegas like any other town, going about their business, taking advantage of the relatively strong economy, the decent weather (not counting July, August and September), and the world-class food and entertainment.

2. Make peace with it. Locals use various peacekeeping tactics. Some play only when they have company. (Usually, the visitors win and the locals lose. After a while, we just drop visitors off at the casino and tell them to call us when they’ve had enough.) Others treat gambling like any other form of entertainment: They set a budget, go out for a nice evening, and figure the money’s as good as gone. Usually, they’re right.

iStockPhoto/Johnny Scriv
The “Big Slick,” king of spades
and ace of spades

3. Lose it. As in: “Go on tilt, flame out, circle the drain, hit bottom.” These folks cannot peacefully coexist with gambling. You’ll find them at the casino paycheck promotions, losing two weeks’ salary in two hours, hitting the loan centers on the way home, paying mob-like interest rates to get them to next payday, when the cycle resumes. Eventually, they figure it out and stop, or they become homeless, or, like a friend of mine who became a degenerate sports bettor, they leave town.

Actually, there is a fourth strategy: Become a professional. Some games can be consistently beaten, such as poker, video poker (with perfect play), blackjack (by counting and not getting caught — a practice actively discouraged by the casinos who can, and do, ban those who attempt to win this way) and sports betting (by looking for mistakes in the line or specializing in obscure categories). It takes skill, discipline, money management and plain old hard work. The pros I know work longer hours and have more self-control than anyone. You won’t find them plunging on “Monday Night Football” just to make up for a lousy weekend. (Plunging is the foolhardy strategy of placing the equivalent of all of the lost bets on a final game in a desperate attempt to win it all back.)

As for me, my strategies have evolved over time. Before moving to Las Vegas, I’d visit two or three times a year. Sometimes I’d win, sometimes I’d lose. I’m a fairly knowledgeable blackjack player, so I had that going for me. When I finally decided to make Las Vegas my home, I thought, “I’ll subsidize my meager income by gambling.”

What I learned the hard way is that playing as a tourist and playing as a resident are two entirely different animals. When you live here, you’re always gambling with scared money. Each bet represents a tank of gas or food on the table. Not a good mindset for winning.

It took a two-year losing streak for me to really grasp this concept (hey, I’m not the brightest guy in the world). That’s when I quit cold turkey. Over time, I’ve been able to ease my way back into it (see Strategy No. 2). Now, when I get my semiannual urge to play, my wife and I check into a hotel and pretend we’re tourists. Or, if she’s going out of town, I’ll hit the casinos alone. This happened recently. 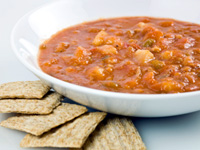 I had my night all mapped out. Because it was a weekend, I’d avoid the 10-splitting tourists, (one of the dumber moves when playing Blackjack), at the big casinos on the Strip. Instead, I’d go to the Tuscany, a smaller joint on East Flamingo where I’d enjoyed success before. But I was also in the mood for clam chowder — the Manhattan kind that’s harder to find. So I hit the oyster bar at Sunset Station Casino, where they serve up a mean bowl along with a nice basket of sourdough rolls. The soup was as good as I had remembered.

Feeling satisfied, I decided to test the waters there at Sunset Station instead of driving across town to the Tuscany. I should have stuck to my original plan, especially when I lost the first nine hands in a row. Switching tables didn’t help. Neither did switching games. Video poker and craps proved just as disastrous. When the dust settled after a scant 90 minutes, I was down $500. Worse yet, I had zero fun. Don’t even ask about the drive home.

That’s another thing about Las Vegas. You never stop learning lessons. The $500 bowl of clam chowder is one I won’t soon forget.