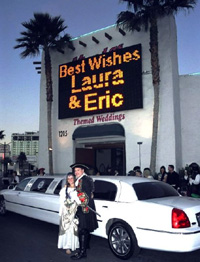 Ready to start a new life
in Las Vegas

Before we got married, my wife’s friend Sherry had a “costume wedding reception” in a suite at the MGM Grand. From the moment we got the invitation, there was no question Laura and I would rent costumes and make the four-hour trip to Vegas from Venice Beach. Little did we know that two years later we would have a theme wedding of our own.

Sherry and Hans scheduled their Native American-inspired wedding in the scenic flats of Red Rocks Canyon just before sunset. It was a beautiful ceremony, and we had plenty of time to get back to the MGM Grand and change into the Indian costumes we had rented for the reception. I actually wore part of my costume to the ceremony because it seemed appropriate to the setting, and a few other people did, too. That put the seed of an idea into my mind.

The costume reception didn’t have a particular theme, so everyone came as whatever they wanted. There were two other Indians besides us, and although our costumes were appropriate to the wedding ceremony, the unofficial best-costume award deservedly went to the husband-and-wife team that came as Sonny and Cher (she was Sonny, he was Cher).

The day after I proposed to my wife, we were watching the Steelers play the Bengals in a sports bar in Hermosa Beach and brainstorming ideas for our own theme wedding with her best friend, Joy. Nothing grabbed us until Joy mentioned that the next day was National Talk Like a Pirate Day. Voilà! We had our theme. And it turned out to be wildly popular as the first “Pirates of the Caribbean” sequel was about to be released. Deciding where to have our wild-and-crazy theme wedding was easy, especially because we had friends and family all over the country. It had to be Las Vegas.

“Grog and Ride”
Private bus service to the wedding

We planned our wedding for the day after Thanksgiving to give everyone a long weekend to travel. Although Treasure Island was a natural choice for a pirate-themed wedding, the hotel’s restrictions and prices and attitude drove us to the Viva Las Vegas Wedding Chapel, where we negotiated a much better deal. Though the chapel specialized in theme weddings, they had never done a pirate wedding before. The staff was wildly excited and did a great job decorating the chapel from a mix of their Camelot and Gothic Graveyard sets. They even shuttled the wedding party to the Monte Carlo in a white stretch limo for the reception; we rented a bus for everyone else so that no one had to drive or cab it. 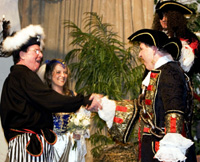 What amazed me is that absolutely every guest dressed up as a pirate — and most went all out. There were eye patches, swords, at least a dozen floppy tricorn hats, lots of sexy sashes and corsets on the women, and even an inflatable alligator to go with the inflatable palm trees and beautiful Caribbean mural in our reception hall. Of course, there was lots of pirate talking, too. There is a powerful psychology at play when adults put on costumes for a special event. It definitely releases inhibitions. Joy, my wife’s “wench of honor,” ended up on stage singing with the lead singer of a band at Monte Carlo’s Brew Pub while my mom danced with one of my “first mates.” Three years later, I still hear stories of fun and reckless abandon at our wedding that I haven’t heard before. 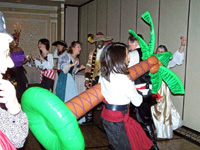 But one of the best things about planning our pirate wedding was that in shopping around for services, restaurants, chapels and hotels, Laura and I met a lot of locals and got to know the city beyond the Strip a little better. Before the wedding, Vegas had seemed like one giant tourist trap, but we soon discovered it is really a city of diverse boroughs, much like New York. Summerlin is different from Henderson, because it has no center. North Las Vegas is its own city and seems pretty dedicated to NASCAR and long-distance truckers. Downtown bumps and grinds like a flashback from the old days — much different from the more sedate enjoyments in the isolated housing developments and small pub casinos stretching along Blue Diamond Highway in the southwest.

Laura and I really liked what we discovered, and six months later we started scouting the Vegas job and property markets. Nine months after our wedding, we left Los Angeles -– a city of broken dreamers and snarling traffic — to settle comfortably in the Green Valley Ranch area of Henderson. The decision to leave L.A. was almost as easy as the decision to have a pirate wedding in Vegas. Moving meant we could set sail together to seek out our next, shared horizon — which we’ve done with no regrets.

Las Vegas is much more than a city of weddings, gamblers and vice. It’s a city where lovers can come, build a life together and have their dreams come true — and I’m not just talking about splitting aces against a dealer’s five!

7 responses on “A New Home after a Pirate Wedding”