Liberace wasn’t a member of the Rat Pack, he hasn’t inspired legions of impersonators, and he doesn’t have a street named after him. Even so, no other entertainer has ever come closer to embodying the glitz and sparkle of Las Vegas than the wavy-haired showman with the rhinestone-studded costumes and high-wattage smile. If the Strip were a person, there’s no doubt it would be Liberace.

Although he shuffled off this mortal coil in 1987, Liberace’s radiance lingers at the museum he founded on Tropicana Road. His costumes, still dropping jaws after all these years, are displayed on mannequins surrounding a mirror-encrusted piano on a raised and mirrored dais in the center of the mirrored main gallery. The ceiling is mirrored, too. Given all the rhinestones also on display, it would take a thousand disco balls to rival the number of reflective surfaces in the room. 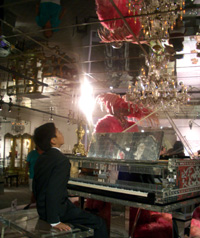 I did not, however, head to the Liberace Museum to catch a million glimpses of my open mouth. While it was impossible not to gape at Mr. Showmanship’s red velvet hot pants or his 200-pound “King Neptune” cape, I was headed for the “Cabaret Showroom” beyond the mirror-studded gallery for something reflective of a different aspect of Liberace’s legacy.

What many people don’t know is that Liberace invested his money in more than chinchilla mantles and diamonds as big as the Ritz. The foundation he established before his death has funded the educational careers of nearly 2,500 artists, not just musicians, but also painters, dancers, architects and others. More than $5 million in scholarship grants has been awarded over the last 32 years, and the foundation, in connection with the University of Nevada, Las Vegas, supports other programs for artists and musicians as well. The event that brought me to the Liberace Museum on a recent Sunday afternoon was this year’s kickoff of a long-standing tradition: the annual Liberace Piano Competition.

The competition got its start in 1993 as the Liberace “Play-A-Like” Competition. (I attended the finals of the Play-A-Like Competition in 2004.) Since 2006, the contest has broadened its focus to include traditional classical performance, and the event has begun to draw competitors from across the country and abroad. This year, 27 contestants from four states and two countries have made it to the semifinals.

Sunday’s event was a “showcase,” a chance for the contestants to perform without worrying about judges. The stage was set with two pianos: one plain black Steinway and Liberace’s own rhinestone-encrusted Baldwin. Two flickering electric candelabras stood on tables nearby, along with a sparkly jacket on a tailor’s dummy. Headless, it still did a good job of suggesting that Liberace’s ghost was observing the proceedings. Increasing the feeling of supernatural supervision was a larger-than-life-sized cutout of Liberace covering the back wall. 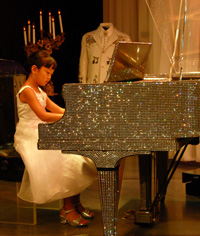 Photo by Mark Sedenquist
Victoria F. Young, 8, wearing shoes
the maestro would have approved
of, plays a piece by Debussy on
Liberace’s rhinestone-studded
Baldwin piano.

The contestants, who ranged in age from 6 to 17, had their choice of pianos. Whether it was Liberace’s silent influence I can’t say, but most of them chose the sparkly one. Whether or not it was the better piano, it was certainly the more spectacular. The performers included 17 young pianists from Las Vegas and one from California. Most were dressed in a style that could be called a nod to Liberace – the girls wore chiffon dresses, the boys dapper tuxedos with satin cummerbunds. One little girl’s shoes were just as glittery as the maestro’s piano. If Liberace wasn’t smiling from above, the audience was making up for it. Frankly, I think it’s impossible not to smile when children play Mozart, and these kids also did a great job with Debussy, Prokofiev, Beethoven and Bach. 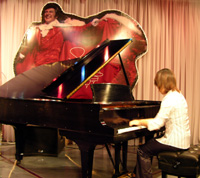 Photo by Megan Edwards
Liberace smiles on Na Ye Choi, 17,
as she plays a Joplin rag.

The semifinals of the competition will be held on Sept. 13 and 14, and the finals the following week. While most contestants are competing in the classical division, five are vying for glory in the showmanship division, in the old “Play-A-Like” tradition. These competitors are expected to wear costumes and must perform a number that reflects “Liberace’s joyful spirit of showmanship and entertainment ability.”

While Liberace was not part of my experience until I moved to Las Vegas, I have since developed a fondness for his gaudy brand of showmanship. I still drop my jaw when I visualize him in those bejeweled boots and hot pants, but I find myself smiling when I hear a recording of “Chopsticks.” After the closing trill, that distinctive mellifluous voice rises over the unending applause to say, “Why don’t I slip out and get into something more spectacular?”

It’s been more than 20 years since Liberace slipped out for good, but thanks to the Liberace Foundation, other artists get a chance to realize their dreams. Even in death, Liberace has gotten into something more spectacular.

8 responses on “Something More Spectacular: The Liberace Piano Competition”