I grew up in Albany, N.Y., a half hour south of the historic Saratoga Racetrack and what is now Saratoga Gaming and Raceway, a harness track that several years ago added video gaming to the property. When I was little, my father took my sister and me to the races as often as my mother would let him. “Come on, girls!” Dad would bellow when his horse came in, and we’d skip after him to the betting window to watch him collect his winnings.

In my 20s and 30s, a day at the races consisted of friends, siblings and our young families sprawled out in the paddock area with a picnic lunch, a cooler of beer and playpens for the kids. The tradition continues; last year my grandson and I had a “Granny and Connor Track Day.” Encouraging gambling in a 9-year-old is probably not the best idea, but nonetheless I hope to get back east before the summer is over for some more inappropriate intergenerational bonding. 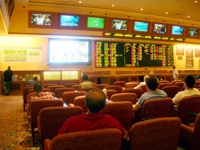 Though it’s an entirely difference experience, I can get my Saratoga fix right here in Las Vegas. All the major casinos have race and sports books, separate areas that simulcast races and broadcast other sporting events from all over the country. If you’ve never played the horses in a sportsbook before, you don’t know what you’re missing — it’s a blast! You can place your bets and watch whatever race you want from your own private TV monitor while pretty cocktail waitresses serve drinks for free (just remember to tip them). Life doesn’t get any better than that. Especially if you win.

So how do you win? Well, my handicapping strategy primarily involves the relevance of the horse’s name to my personal life, which I interpret as divine guidance from the equine gods. And I always, I mean always bet on a gray horse, especially if it’s a gray No. 5. My methodology is scientifically unproven, I admit, but it works pretty well.

The nice thing about playing the ponies is that it doesn’t have to cost an arm and a leg — you can wager as little as $2 a race — and if you go with a friend, you can pool your bets. My BFF Debbie and I each pick a horse, throw in a dollar apiece, and then box our choices in an exacta. This way we spend a buck a race, and if our horses are the first and second to cross the finish line, in either order, we win half the exacta payoff. It’s as easy as that!

Deb’s not quite the race fanatic that I am, but that’s OK — the sportsbook is a great place to go solo. Between races I like to read my New York Post (guilty pleasure), work on some writing I’ve brought with me, and chat it up with the elderly men who come to shoot the breeze and share hot tips with their cronies. In the past five years of haunting these sportsbooks, I’ve gained a very close friend and have made many pleasant acquaintances, including one cute old grandpa who confided that he comes “to work” only when “The Young and the Restless” is over. These guys are the best part of the whole scene.

On a recent Saturday at the sportsbook at the Green Valley Ranch Resort Spa and Casino, Deb and I watched the two retired gentlemen next to us pore intently over the Daily Racing Form, circling numbers and decoding significant bits of data. I’m always a little sensitive about contaminating the guys’ sacred haven with our female energy — my father (and grandfather) would flee to the Off-Track Betting parlor precisely to escape the womenfolk — but these men seemed not only willing to endure our inane girl talk, but eager to strike up a conversation.

As it turned out, our new friends Sonny and Monty are Saratoga fans and former New Yorkers who came to Las Vegas 30 years ago.

“This was the land of opportunity,” Monty told us. “Here, I had a chance to meet people who could help me climb the ladder. In New York I was just one in the crowd.” He shook his head. “I wasn’t gonna meet someone like Barron Hilton on the subway, ya know what I mean?”

Over the next few races we heard about how Sonny and Monty worked themselves up to become executives in the Hilton Hotel and hung on to their stories of the glamour of old Vegas. The boys also shared their handicapping strategy — which actually considered the performance records of the jockeys and trainers — and gave us a tip on a horse, which came in somewhere toward the back of the pack. Then Monty gave us the best advice of the day.

“The most important thing,” he began, glancing over at Sonny, “is always have a good friend at your side. They won’t be around forever.” At that moment, I thought of my father and how, if he were still alive, he would have loved hanging with the boys at the sportsbook.

Deb and I didn’t cash in a single ticket that Saturday, but thanks to our new friends, we certainly left with a feeling of coming out ahead.

One response on “A Day at the Races, Las Vegas Style”