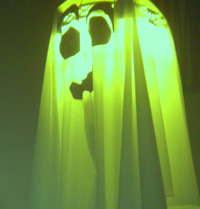 Ghost stories are fun to hear and fun to tell, especially at this time of year, but are they truth or are they fiction? Scoff if you like, but according to some studies, approximately one in five people believe they have seen a ghost, and a Harris Poll conducted five years ago found that more Americans believe in ghosts than don’t.

Me, I’ve been on both sides of this issue. I once worked for a research foundation in New York which funded studies on UFOs and paranormal activity with a hard-line skeptical attitude: “Prove it.” Many grant recipients did, at least by presenting evidence of anomalous experiences that could not be explained in standard scientific terms. Others didn’t. In my own life, I’ve seen ghostly apparitions debunked, but I’ve also felt some things – extraordinary things – that are hard to explain. Let’s just say I don’t mention those things on most job interviews.

Whether you go in as a true believer, a skeptic or a fun-loving thrill seeker, a good ghost hunt will almost always lead you to some old, creepy place that is dark and dilapidated. Often you will find yourself surrounded by real physical dangers, like rotten floorboards, big spiders, rusty nails and angry vagrants. For this reason, the first rule of ghost hunting is to never go it alone. The second rule is to bring a camera or voice recorder just in case an “orb” or other evidence of a discarnate entity presents itself.

So, where to start in Nevada? According to The History Channel and paranormal investigator Janice Oberding, Las Vegas is a “hot zone” of cold spots, unsettled spirits and well documented anomalous experiences.

One of the spookiest places is right on the Strip, at the old MGM Grand Hotel. Renamed “Bally’s” shortly after a gas explosion in 1980 killed 87 people and seriously injured hundreds more, the building is the site of one of the worst hotel fires in history. Walking across the casino floor late at night, or staying in the tower where so many people died of smoke inhalation, still spooks many employees and guests on a regular basis. Although the hotel has been remodeled at least three times since the fire, voices, cries for help and even the occasional apparition are still reported almost 30 years later. The fireball from the explosion of underground gas tanks is estimated to have ripped across the ground floor of the casino in only nine seconds. It was so hot that it charred some unlucky gamblers instantly, leaving a few with their hands still clutching the slot machine levers or holding their drinks. It’s easy to understand that some spirit might have a parting wish or message to share when the crowds thin down.

Another spooky spot is Sunset Park on Eastern Avenue, where more than 200 bodies were left in the ground when an old cemetery was converted into a public recreation area in the 1950s. Another is the area around the Stratosphere Hotel and Casino, at the north end of the Strip. I’ve always had an uneasy feeling there, perhaps because several people have jumped to their deaths from the observation deck and upper rooms of the hotel (the windows are not sealed shut). Like the gamblers at the old MGM Grand, these spirits may have nowhere else to go, so they linger. Sometimes, what happens in Vegas, stays and stays and stays in Vegas, which is what makes Sin City such an attractive town for avid ghost hunters. 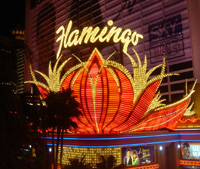 Not all ghost stories in Vegas are quite so grisly, though; some, not surprisingly, feature a celebrity appearance. Liberace is said to haunt Tivoli Gardens as well as his namesake museum with a kind and whimsical spirit. The audacious performer is also known to visit Carlucci’s, his favorite restaurant, and, along with Elvis, the Las Vegas Hilton, where stagehands report hearing distant laughter, singing and the occasional relocation of tools (some sort of ectoplasmic practical joke, apparently). Wayne Newton, in his autobiography, also mentions seeing Elvis’ friendly ghost at the Hilton. And although Bugsy Siegel met his bloody end in Beverly Hills, his ghost is said to happily roam the gardens and the Presidential Suite at the Flamingo, in company with his beautiful red-headed girlfriend Virginia Hill, whose pink, sunburned legs inspired the name of the hotel.

A fun way to get acquainted with the most famous Vegas haunts is to take the Haunted Vegas Tour; tickets cost about $65 per person for the 2.5-hour bus tour around town, but keep your eyes open for periodic two-for-one coupons in coupon books around town. Janice Oberding’s Web site HauntedNevada.com is a good starting point for research on haunted places, as is the Ghost Research Society, which offers many practical tips, guides and advice on ghost hunting.

If you are interested in hunting a few ghosts yourself, take a look at the Unofficial Ghost Hunter’s Code first. You may not agree with all 25 statements that make up the code, but they make for interesting reading and might prove useful when you’re out in the field on a spooky night with nothing but a flashlight, a camera and a funny feeling that you’re not alone.

Of particular note for anyone interested in the paranormal and the occult is Sin City Para Con, a conference on the paranormal to be held right here in the least normal city in the U.S., from Oct. 23 through Oct. 26 at the Plaza Hotel. It might look like it’s going to be a freak show from the lineup of speakers and performers, but amid all the self-promotion you’re sure to find someone – or something – that will raise the hairs on the back of your neck!

18 responses on “Ghost Hunting in Vegas”