When I was in the first grade I was diagnosed with Legg-Calvé-Perthes disease, a relatively rare bone disease. I spent a year in bed, in traction. One of my most vivid memories of that immobile year is watching Walter Valentino Liberace’s TV show. There was something magical about watching this entertainer play the piano. I remember thinking that his costumes were pretty funny and his rhinestone rings were very eye-catching, but what was really captivating was an “unspoken language” that emanated from his music.

What is perhaps more strange is that I always thought I heard laughter when Liberace played. It didn’t matter what he played – it could be a classical composition or a cover of some of the popular music of the 1950s or 1960s – I always sensed faint laughing somewhere just beyond the audible sound. Now, all these years later, I wonder if Liberace wasn’t secretly laughing at his audience. Whatever the case, I will never forget the transporting, magic-carpet power the man’s piano playing had on a boy confined to bed.

When I recovered, I began studying piano, perhaps motivated by those memorable performances. I have no doubt that Liberace inspired legions of kids to undertake piano instruction. But even though I practiced faithfully and learned a heck of a lot of musical theory, I never heard that laughter in my own performances. Eventually, I moved on to other pursuits. Then, in May 2004, I attended the Liberace Play-A-Like Contest, held in the Cabaret Showroom at the rear of the Liberace Museum, on East Tropicana Avenue. The room was packed to the rafters with dedicated fans. Their wild enthusiasm made me think I should return to the museum and find out more about the virtuoso who has managed to maintain such a passionate following, even after his death in 1987.

Somehow four years sped by before I made it back to the museum. Even though it’s a sparkling treasure trove of entertainment history and a place I always recommend to out-of-town visitors, the museum doesn’t seem to call my name. I suspect it’s because I’m more into the music than the glitz. And music is what drew me back. This month, I attended two events in the 2008 Liberace Piano Competition, the bigger and better-known descendant of the old “Play-A-Like” contest. 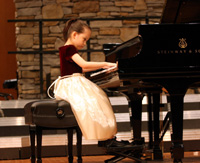 The 2008 competition attracted 26 pianists from four states and two countries ranging in age from 6 to 68. They competed in four divisions: Classical Junior (12 years and younger), Classical Senior (ages 11 to 17), Classical Open (contestants must be enrolled in an accredited higher education music program) and Showmanship (amateur and professional performers of all ages).

Because the Cabaret Showroom at the Liberace Museum is far too small to accommodate the larger audiences the competition now attracts, the finals were held at the large and acoustically wonderful Community Lutheran Church. The sanctuary easily accommodated the 400 or so spectators. A brand-new Steinway Concert Grand piano stood center stage; flanking it were two large video screens hung on the upper walls of the church sanctuary, from which the smiling countenance of Liberace looked down on every performance. At stage right, three elaborate rhinestone-studded costumes sparkled on tailor’s dummies. The event hosts stood at stage left, in front of a signature Liberace candelabra. The panel of judges, who sat at a table in front of the first row, studied the musical scores of each piece played and awarded points based on the technical mastery and showmanship of the performers.

When they finished their deliberations, they announced the winners: Abigail Varghese (Junior), Carmen Lai (Senior), Ashlee Young (Open) and Christopher Carter (Showmanship). I particularly liked Christopher Carter’s performance, and I wasn’t alone. His enthusiasm for the piano and his showy style earned him a standing ovation for his rendition of “Alabama Jubilee.”

Four performances stood out for me. Who couldn’t smile while watching 6-year-old Tiffany Koo tackling difficult works by Mozart and Chopin while using a special foot pedestal to reach the pedals (she was far too short to reach them from her perch on the bench). She played with elaborate drama that belied her young age – and showed some personality at the end of the competition when she resisted yielding the stage so the “official winners” could have their photographs taken. Otto Ehling, who has a jazz performer’s mane of hair and an untraditional stance at the piano, may not have matched the technical precision of some of the other musicians, but there were a couple of extraordinarily emotional moments in his performance of a Mephisto waltz by Franz Liszt.

Another treat for the audience came when Philip Fortenberry, the competition’s artistic director, introduced the concept of a “portrait of music.” This is a composition performed live and improvised in the moment. Fortenberry dedicated his “portrait of music” to World Peace Day and the volunteers of the Liberace Museum. The extemporaneous composition was not only an impressive achievement technically, but also united the audience in a palpable surge of emotion. Fortenberry will be performing more music portraits on Tuesdays, Wednesdays and Saturdays in the Cabaret Showroom at the museum.

The third performance of note didn’t feature a single musical tone – it was the hosting of Dana Martin and Bruce Ewing. These two local entertainers provided much unintended mirth and good cheer attempting to pronounce some of the tongue-twister names of performers and composers.

The show closed with a “reverse lip-synching” performance of Liberace’s “I’ll Be Seeing You.” The song opened with a video presentation of Liberace performing his well-known standard. Then Fortenberry took over the piano portion while Ewing led the assembled cast and nearly everyone in the church in a touchingly sweet sing-along.

The final round of the 2008 Liberace Piano Competition was an event Liberace himself would have enjoyed, and he’d certainly have reason to be proud of it. It’s just one of the programs sponsored by the foundation he founded back in 1976. The Liberace Foundation has awarded more than $5 million in scholarships over the years to students of the creative arts. While I can’t say I heard him laughing there at the piano competition finals, I think everyone left the event wearing a vintage Liberace smile.