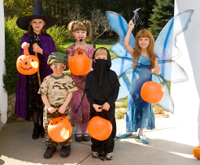 iStockphoto.com/AzureLaRoux
Kids in costume — All dressed up
and… no place to go?

For a city known for its exciting and glamorous nightlife, a Las Vegas Halloween is refreshingly low-key. That doesn’t mean that it’s any less fun, especially if you have kids. After all, Halloween always makes a big impression on kids – just ask anyone who has ever put on a mask and extorted candy from the neighbors. Remember how you’d plan your Halloween night months in advance? How you’d walk for what felt like miles around your neighborhood until your feet hurt and your arms were sore from carrying around that full bag of candy?

I lost track of that kind of Halloween excitement when I became an adult. But now that I have two small children along for the ride, I can revisit childhood thrills through their eyes. This is one of the best things about being a parent! While my own experience of Halloween has changed, I can create new memories with my kids.

And they are new memories, because Halloween customs have changed. For one thing, trick-or-treating from house to house has dwindled down to almost nothing in recent years. At my house, we get only a few groups of trick-or-treaters all night, and their parents trail not far behind, keeping a watchful eye on them. The concern is safety, I think; those oft-repeated warnings about taking candy from strangers have had their effect.

That’s too bad because Las Vegas has some of the best fall weather in the country for trick-or-treating. The average low temperature in October here is a mild 57 degrees. I grew up in Denver, where it seemed to snow every Halloween, so it’s disappointing not to hit the streets with those little superheroes and fairies. But I don’t. Instead of trick-or-treating around our neighborhood, I’ve followed the crowds of other parents to public Halloween events around town. My kids are young, and they don’t care where we go, as long as we go! They’d be happy to wear their costumes to the grocery store as long as they got some candy out of it.

The best Halloween public events are at the region’s local libraries. My kids and I already love going to the library for books, and it’s even more fun when they get to say “Trick or treat!” to our librarians and take a spooky walk through the entire building. Some libraries transform a children’s room into a haunted house; others offer Halloween crafts. Whatever the offering, the library is a good place to go because the grown-ups won’t be bored to tears (you can always grab a magazine), but the kids still will have a blast.

Many local community centers have Halloween carnivals. The kids are encouraged to wear their costumes, and there’s an abundance of candy distributed throughout the trick-or-treat stations. You’ll typically find pumpkin carving, face painting and friendly clowns as well. We try to hit at least one of these carnivals each year. If I’m lucky, the kids will see some of their friends and I can double-team the supervision with the other parents. The biggest downside to these kinds of events is that, like every other family-oriented event in Las Vegas, they are insanely crowded. Local parents are so desperate for family-friendly events (this is Sin City, after all), that when one happens, the whole town flocks in for some action. Still, except for having to stand in some lines and endure the crowds, the carnivals are a ton of fun. 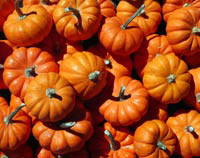 But to me, there’s more to Halloween than candy and costumes. It’s a seasonal celebration, and I want my kids to recognize that, too. It’s about watching spooky movies and telling ghost stories. It’s about picking a pumpkin and carving the jack-o’-lantern. It’s about the smells of cinnamon candles and roasted pumpkin seeds. Most of all, it’s about … food! A good Halloween has parties – hopefully with lots of scrumptious fall dishes and tasty treats to sample like freshly-baked pies and warm casseroles. Having kids just gives me another excuse to attend a fall party or even host one myself – and I love to host a good party!

So, parents, take heart. Halloween may not be exactly as you remember it, but between the city’s activities and some homespun spook-and-celebration, it can still be a nostalgic and entertaining time for the whole family.

To find out more about where to take your kids on Halloween in Las Vegas, visit the Review-Journal’s events listings. To pick your own pumpkin, check out Gilcrease Orchard.