A couple of years ago, one of the columnists for this Web site, Ellen Ross, purchased one of the richest gold mines ever discovered in the American West. Since I know that she is not a hard-rock miner and didn’t seem to be living the life of a multimillionaire, I’ve long been curious about her purchase in the Eldorado Canyon. A couple of weeks ago, Ellen invited me to join her on a visit to the fabled Techatticup Mine and the Eldorado City Mining Camp area. Here is a map for a 90-mile car trip that you can do in half a day. It will give you a taste of the wild, wild West that is practically on the doorstep of the Las Vegas Strip. 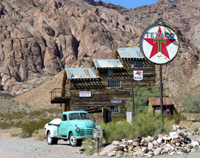 The sleepy hamlet of Nelson is about an hour’s drive south of Las Vegas, just off U.S. Highway 95 on Nevada Route 165. At one time, the town boasted a school, post office, and stores; it even took its first steps to cityhood in 1906 – the same year Las Vegas filed the town site map it considers its “birth certificate.”

Situated in the middle of what came to be known as the Eldorado Mining District, Nelson was the nucleus of an area that saw active mining for gold, silver, lead and other prized minerals beginning in the 1700s. In the late 1860s, as many as 5,000 people lived and worked in the Eldorado area, making it the largest community in southern Nevada. Famous as it was for its mineral wealth (some sources report as much as $10 million in ore was extracted from the canyon), the Eldorado was equally famous for lawlessness. Many of the prospectors were deserters from Civil War armies, and many ownership claims in the mines were decided by marksmanship rather than by legal means.

William Randolph Hearst had an interest in the Queen City Mine (later called the Savage Mine), which was located adjacent to the rich ore deposits upslope in the Techatticup Mine. But even with his economic muscle, Hearst was unable to prevail in the harsh conditions of this area. Several of his employees were found dead – and not from natural causes.

The original Nelson cemetery was located near Nelson’s Landing, which was a prosperous port in the 1860s for steamships carrying ore and equipment on the Colorado River between Yuma, Ariz., and the Eldorado district. It remained an active marina until September 14, 1974, when a monstrous flash flood buried it – along with the restaurant and 75 vehicles – under 45 feet of debris. Nine people died, and the community of Nelson’s Landing was effectively rendered extinct.

The current Nelson cemetery is still in use, located about a quarter-mile north of town. Grave markers are still being erected, not only for residents who have recently died but also for those who passed away in the early 1900s. Donna Andress, a current Nelson resident, has compiled a book of interviews with Nelson pioneer families which provides a detailed look into the history of this area. I was fortunate to have Ellen’s copy as I walked around the cemetery – it was like a time-machine ride into the not-so-distant past.

Walking among the headstones in the Nelson cemetery, I was struck by the relatively short lifespan of the residents. I did see one marker, though, for a Nelson pioneer who lived to the ripe age of 100. Under one bush, I found (and left in place) the remnants of a Prince Albert tobacco can. Such containers were often used to hold the vital statistics of birth and death in Wild West cemeteries – far cheaper than a headstone.

Today, the town of Nelson has shrunk to fewer than 40 houses. Many of them are quite photogenic, boasting fascinating collections of mining artifacts right in their front yards.

About 1.5 miles east on Route 165, a collection of reconstructed mining shacks and outbuildings comes into view on the north side of the road. The Eldorado Canyon Store and Gold Mine Tour property is the work-in-progress of Tony and Bobbie Werly. The Werlys purchased the Techatticup Millsite in 1995 and transformed it into a new kind of gold mine; it now serves as the launching point for thousands of tourists who explore the area each year. Busloads of tourists, picked up from hotels in Las Vegas, arrive here for half-day and full-day tours of the surrounding canyons and mining areas, either on horseback or by ATV. The Werlys also provide guided kayak trips for those who want to explore the coves and beaches on the Colorado River. 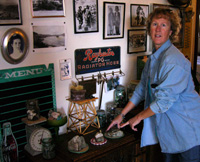 Bobbie Werly, the lead docent, also conducts programs that are part of a Nevada history program for visiting schoolchildren year round. The store houses a museum that is a treasure trove of mining artifacts, mineral specimens and photographic evidence of the feuds and murderous deeds that made this canyon legendary. If Bobbie is available, be sure to ask her to show you the “special exhibit” she keeps in the store’s freezer. It is an exhibit you won’t soon forget. Bobbie and her employees also provide tours into the Savage Mine.

The white tailings – those mounds of bleached soil that you see across the highway – are leftovers from cyanidation, part of the mining process by which the ore from the mine was crushed into gravel by the immense weights of a stamp mill and then leached with cyanide and other chemicals to yield gold and silver. The remnants of the stamp mill are still visible as well. The tailings are clearly visible on this satellite map, which also shows the location of the primary mines of the district; scroll over the marked rectangles for the names of the mines.

Directly south of the Techatticup Millsite (which is called Eldorado Mine on some maps) is the Techatticup Mine. If you were to hike or fly over the ridge you would reach the main part of Eldorado Canyon and the location of the El Dorado Mining Camp; the second photograph in Ellen’s recent article was taken at the camp in 1863. Today, there is a new camp operating in this same location – an attraction for tourists who want a “Western experience.” Taking a theme-park approach to history, its main features are a kitchen with running water, a hitching post for ride-up cowboys, a Conestoga wagon replica and some reconstructed miner shacks. 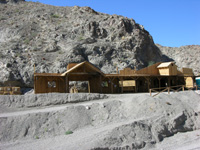 When we reached the “new and improved” mining camp (tourists reach this spot either on ATVs or by horseback), I discovered the real reason Ellen purchased this historic mining district. Ellen, a Nevada master gardener, is working to create a desert botanical garden along the ridgeline of the canyon. I assisted her in placing plant identification placards along the trail. As we worked, I couldn’t help thinking that this is still a wild place. The canyons still harbor mountain sheep, rattlesnakes and any number of other-than-always-benign denizens. It will be interesting to see how the Eldorado treats this newest wave of Wild West entrepreneurs. 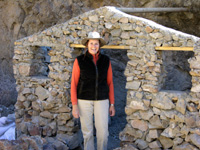 A couple more miles east on Route165, Ellen and I pulled over to gape at the cavernous opening of the Jubliee Mine. The mine’s ceiling has fallen in, creating what looks like a natural, open-air cavern. It’s a little spooky – a feeling that’s amplified by the skull-and-crossbones graffiti around the openings to several of the shafts. Driving to the end of the road, we stopped and marveled at the views of the Colorado River. Perhaps not surprisingly, given the area’s long history of attracting desperados, parking a vehicle here overnight is unwise on the weekends. A group of city youth can be found frolicking at a nearby cove on weekends and break-ins of parked cars at the viewpoint happen all too frequently now. But it’s usually peaceful and quite deserted during the day. If you’ve brought lunch, this makes a nice picnic spot.

On this particular day, having packed no hamper, Ellen and I heeded the siren call of a Brewer’s Bratwurst sandwich and an intensely flavorable Black Canyon Stout. Retracing our route north on U.S. Highway 95, we turned east on U.S. Highway 93 to Boulder City, where we sat in the shade of the picturesque patio at the Boulder Dam Brewing Company, listening to tunes from the Steve Miller Band. There is something delightfully ironic about listening to Miller singing “I want to fly like an eagle” when 45 minutes earlier we had been sitting in Eldorado Canyon, where wild eagles fly all the time.

There are plenty more places to explore around Nelson, and I recommend more than one day trip to this area. Just be sure to carry extra drinking water and pack some extra common sense. The canyon has a gritty rawness as well as a harsh beauty. The lawless days of the Eldorado are history, but this is definitely a place where history is still alive.

8 responses on “A Day in Eldorado Canyon”