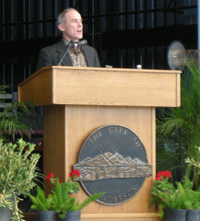 Can a dog story bring an entire city together? It can if the story is Marley & Me: Life and Love with the World’s Worst Dog

During the month of October, “Marley & Me” was the featured book of the second annual “One Book Henderson” movement. Sponsored by Henderson Libraries in cooperation with the City of Henderson and other partners, One Book Henderson strives to unite the community by providing an engaging literary focus for a series of public events and discussions – some serious, some not so. This year’s book was chosen by Henderson residents from an initial list of more than 30 offerings.

“Our slogan is ‘Read the book, join the conversation,’” says Tom Fay, executive director for Henderson Libraries. “We hope that every resident will have interesting discussions over lunch, dinner, the water cooler, and maybe even with their canine companions.”

Well suited to the One Book mission, “Marley & Me” is a book with near-universal appeal. Written in a highly accessible style, it’s the story of the Grogan family’s 97-pound Labrador retriever, a dog equal parts loving, loyal and incorrigible. How Marley becomes an indispensable member of the family while chewing up everything in sight will warm the hearts of even the most jaded readers.

Since its release in 2005, “Marley & Me” has sold more than 5 million copies, spending four months atop the New York Times Best Sellers List. A feature movie starring Jennifer Aniston and Owen Wilson is scheduled for release on Christmas Day.

The One Book movement was established in 1998 by Seattle librarian and best-selling author Nancy Pearl. What began as “If All of Seattle Read the Same Book” has grown to more than 350 One Book programs throughout the country.

And grown it has. This year’s Henderson event featured more than two dozen programs, including a kickoff carnival, book discussion groups in venues throughout the city, movie screenings about (and possibly for) dogs – including “Best in Show,” “Turner & Hooch” and “Must Love Dogs,” pet scrapbooking workshops for adults and teens, a variety of children’s reading sessions – even a knitting-for-dogs workshop. It was capped off by a personal appearance and presentation by John Grogan at the outdoor Henderson Pavilion on Sunday, Oct. 26.

On a recent Thursday night, I attended a book discussion in the conference room of Paseo Verde Library, on Green Valley Parkway across from Green Valley Ranch Station. The group consisted of nine people, mostly female, mostly older. Our moderator was Janet Mastalier, a friendly, enthusiastic woman who just happens to be co-chair of the One Book event.

Janet ran a loose ship. After asking a couple of book-related questions to get us off on the right foot (or paw), she pretty much let the conversation go wherever it wanted. That included forays into obedience training, the similarities between dogs and kids, favorite family pets, takings dogs on vacation, how dogs have a different sense of time, the strange things that dogs eat (light bulbs, an entire roast (including aluminum foil), screen doors, yarn and much more), spaying and neutering, vet horror stories and dealing with the loss of a pet. One slightly confused middle-aged gentleman wandered in and kept trying to steer the discussion in the direction of Budapest, his favorite city. The group listened courteously before returning to the topic at hand.

While not a traditional book discussion group (thank goodness), it fulfilled One Book’s goal of encouraging dialog and civic engagement. After 75 minutes or so, nine strangers had become nine acquaintances, and I had added Budapest to my list of places to visit.

Three days later, on an unseasonably warm October Sunday afternoon, I sat in the Henderson Pavilion (sometimes unofficially called the “Dolly Parton Pavilion” for its large white protruding covering) with roughly 700 other Marley-lovers and listened to John Grogan talk about the dog and the book that changed his life. Grogan, a personable, approachable man who seemed genuinely thrilled to be there, recounted stories from the book, some humorous, some poignant, all of them entertaining. One of my favorites involved the time Marley swallowed Grogan’s wife’s gold chain, “a piece that set me back a week’s salary,” he explained. “I spent three days following Marley around the backyard with a shovel. When it finally came out, it was shinier than the day I bought it.”

Marley also celebrated the news of Grogan’s wife’s first pregnancy by eating the test strip. Small wonder the dog thought his real name was “No, Marley. No!”

Grogan spoke most eloquently when addressing the official subject of his talk: “What Man’s Best Friend Can Teach Us About Being Human.”

“Through the ebbs and flows, the blessings and challenges all marriages face, Marley’s heart was always pure, always joyful, always exuberant,” Grogan said. “He never met a living creature he didn’t like. He had only one mode: play mode. But behind that wild lug-head exterior lived a sensitive soul.”

As the Grogans tried to mold Marley to their way of living, Marley was actually molding them to his. And so the lessons they learned from their big loopy companion included:

• Patience
• Accepting those we love, flaws and all
• Living things are not to be discarded
• Grace and optimism in the face of adversity
• Embracing life’s simple joys
• Give a dog your heart and he will give you his

After 13 years, when the end finally came, Grogan told Marley something he’d never said before: “You are a great dog.” And then he wrote a goodbye in his newspaper column.

“A typical column generated half a dozen reader responses,” Grogan told us. “This one got 800.” The story had touched a nerve, and Grogan began to think about writing a book. Like most first-time authors, he was turned down by a series of agents (11 of them) before a sharp one recognized the potential. Even after the manuscript sold to HarperCollins, Grogan’s editor advised him to keep his expectations low.

“This isn’t the type of book that will get a lot of national attention,” the editor said. “It won’t jump up the bestseller lists.”

“I’m here to tell you that dreams can happen,” Grogan said. “Whether you’re writing a book or opening a store or going on an adventure.”

During the filming of the movie, it took 27 dogs to represent Marley at various stages of his development. When the shooting wrapped, the producers presented Grogan with a Lab puppy named “Woodson.”

“He’s a handful,” Grogan said, “but not nearly as mischievous as Marley.” Still, the dog wasted no time scratching up his family’s brand-new hardwood floors.

Life imitating art imitating life. Or, as Grogan inscribed in my book, “Woof.”

For information on next year’s One Book Henderson movement and the entire Henderson Library District, please visit MyPublicLibrary.com.

One response on “Henderson Goes to the Dogs”