What is Christmas like in Las Vegas? Is Santa an Elvis impersonator? Is Mrs. Claus a scantily clad showgirl? Could the City of Gaudy Delights possibly get any more bright and shiny? Or is the town too naughty to even celebrate the holiday season?

Have no fear. The Christmas spirit is alive and well in Las Vegas. In fact, there are even a few holiday traditions. No holiday season here is complete without visits to the lighted cactus display at Ethel M’s Chocolate Factory, or to Opportunity Village’s Magical Forest or to the Gift of Lights display in Sunset Park.

There is another holiday tradition here, too, and it is one that has special meaning to me. I am a lover of history living in a city that isn’t exactly enamored of the past. Looking backward is just not a common theme here in Vegas. For example, buildings that have outlived their original purpose usually get torn down; the old makes way for the new. That means that though the area has been settled for more than a century, few houses survive from the early years.

Fortunately, thanks to the Clark County Museum, there is a place for those who hunger to see how earlier inhabitants of Clark County lived. Over the years, the museum has moved a half-dozen historical houses and other buildings from around Clark County to the museum grounds. The homes are restored in period style, spanning every decade from the early 1900s through the 1960s. The buildings are always fun to visit – visitors can walk right into most of them – but the holiday season is the best time because the houses are all decked in holiday decorations appropriate to their historical period.

The first house on “Heritage Street” is the Townsite House. Built in 1942, this home is one of 1,000 homes built to house workers employed at Basic Magnesium, the magnesium processing plant that opened during World War II in what is now the city of Henderson. Since my husband and I are in the process of refurbishing our own Townsite home, built the same year as the museum house, this one has special meaning to us.

The holiday décor here reflects the wartime era. Although electric lights were available for Christmas trees at this time, there are no lights on the Townsite House tree because blackouts were observed here during the war. (The locals feared airstrikes, especially those living close to the plant.) Instead, the tree is decorated with paper-chain garlands and other homemade ornaments, along with tinsel icicles. A small wooden crèche sits in one corner of the small living room, while a pottery Santa Claus graces a table covered with a green netted cloth. Examples of toys that might have been found under the tree include a wooden hobby horse and a tricycle with a red wagon attached. Despite wartime rationing, a tray of delicate cookies and chocolates awaits holiday guests.

Across the street sits the Beckley House, a California Bungalow built in 1912 but restored to the period of the 1920s. The first house I owned was a bungalow in Denver, and I still love the craftsman style evident in these homes. The largest of the museum houses, the Beckley House is lavishly decorated with a tall tree festooned with glass balls. No electric lights here, either, since Will Beckley, who came to Las Vegas from Switzerland, favored the old-fashioned candles. The fire hazard is too great to allow the candles to be lit, but still the tree manages to glisten with its many strings of multicolored glass beads. Victorian paper cones also grace the branches, along with gold-painted pine cones and walnuts tied with bright ribbons. 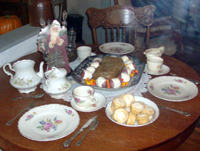 Photo by Tami Cowden
Representing the 1920s, a
Father Christmas card and a
typical holiday feast on the tables
at the Giles/Barcus House

Another 1920s home, the Giles/Barcus House, is two doors down. For a time, the house served as an antiques store, and a many of intriguing items remain, most notably an Edison cylinder player with a huge, beautifully painted horn. The home was noteworthy in its time for its indoor plumbing facilities. The holiday display here is simpler than at the Beckley House. A small tree is decorated with paper cutout ornaments, popcorn strung with cinnamon sticks, and colorful crocheted circles. A crochet angel has the place of honor at the top of the tree. Paper figures of Father Christmas adorn doorknobs. A holiday dinner of beef roasted with potatoes, carrots and squash is laid out on the dining table. A platter of corn muffins rounds out the holiday meal. And is that a pound cake resting on the kitchen counter? 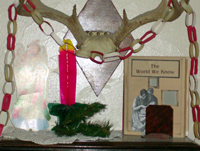 Back across the street again, the Babcock & Wilcox House offers a glimpse at Christmas in the Depression years of the 1930s. Paper decorations dominated in these lean times, although the cheerful kitty cutouts reflect a hopeful air. Also in evidence are some glass balls from more prosperous times. Figures of a mother and daughter making doughnuts, accompanied by plenty of hot chocolate, show that the holiday spirit remained strong, even in difficult times. 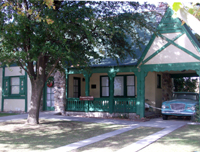 The Goumond House, a Tudor Revival home, represents the 1950s. This house is my husband’s favorite, as it reminds him of his own ’50s childhood. And though I was not born until 1960, I must admit that this house offers a nostalgic walk through time for me as well. The dad of the house sits in the living room drinking his martini, enjoying a tree with plastic ornaments and bubble lights. On the mantel rests a miniature Christmas village painted in pastel colors. In the dining room, a ’50s holiday feast awaits: baked ham with pineapple, a green bean casserole made with canned mushroom soup and French fried onion rings, twice-baked potatoes and, for dessert, a concoction of Jello and fruit, topped with a dollop of whipped topping. I can attest that this display is authentic, for it is laid out on the same style of milk-glass dishes my mother still uses for the holidays.

An unusual offering is the Spartanette Trailer, built in 1948 and restored in a 1960s style. Mobility didn’t mean the holidays were ignored. A small ceramic tree with lights shows that holiday spirit can travel in style.

Clark County Museum employees Dawna Joliff and Sheila Tomola devote considerable attention to the restoration of the homes, as well as to the seasonal displays offered at the museum. Of course, period authenticity will sometimes yield to safety. For example, the illuminated bubble lights in the Goumond House are not period lights, which were extremely hot, but a modern, low-heat, LCD variety. But for the most part, objects found in the homes conform to the time period represented.

Sheila is especially proud of the holiday food items represented in the homes. She fashions the food displays herself, and she stays true to the time period. That green bean casserole, new this year, is properly displayed in a 1950s home. The recipe was first circulated by Campbell’s Soup Co. in 1955. It has since become a staple for Thanksgiving and Christmas dinners across the nation.

That sums up what I like most about the Clark County Museum. It bears witness to a simple truth. However outsiders might view Las Vegas, and whatever reputation this Sin City garners, these homes prove that from its earliest days, Las Vegas has been home to ordinary Americans. Its inhabitants have always had the same hopes, tastes and customs as found in every part of this nation.

Best wishes to all for a joyous holiday season!

The Christmas display is open now through the New Year holiday. Contact the museum for more information.

The Clark County Museum Guild welcomes new members and volunteers. Please call the museum if you are interested in helping to preserve and display history.