The all-you-can-eat Gospel Brunch at the House of Blues inside the Mandalay Bay resort has been attracting hungry fans of all faiths – and none – since 1999. The Gospel Brunch has become so popular it’s now part of the regular entertainment lineup at six other House of Blues locations across the country.

Here in Las Vegas, there are two Sunday shows: one at 10 a.m. and another at 1 p.m. Both run approximately 90 minutes; the first 45 minutes are for eating and getting to know your neighbors before the show begins. This is easy to do because the event is arranged in a manner reminiscent of a church-basement potluck. Six long tables are set up in the middle of the room perpendicular to the stage. Each seats between 24 and 30 people and is generously provisioned with several carafes of coffee, orange juice and water.

This is the place to sit — no lurking like wallflowers at one of the smaller outlying tables. After all, this is a gospel brunch and, believe me, things get festive even before the music starts. The open bar featuring abundantly flowing mimosas and bloody marys no doubt helps. (The $50 per-person price includes food, entertainment and the open bar.) My wife and I sat with five girls from England who I’m pretty sure hadn’t gone to bed the night before as well as four gentlemen from Japan who must have decided that the “No cameras” policy meant, “Join the crowd because there won’t be any evidence afterward.” 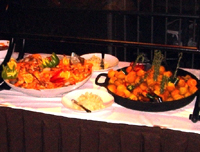 A delicious, Cajun-inspired breakfast feast is laid out buffet-style with separate stations for carved meats, waffles and desserts. The carving station features prime rib and honey-glazed ham, the waffles are fresh-off-the-griddle, and the desserts are ample, but this feast is really about the House of Blues’ signature down-home cooking: biscuits and gravy, giant peel-and-eat shrimp, cheese grits, barbeque chicken and some of the best jambalaya I’ve had in Vegas. Only the foolish load up on cinnamon buns and sweet rolls before diving into the main courses.

The first chords of music are your cue to dash back to the bar because you may want more than coffee during all the clapping and singing that’s about to ensue. The food stays out during the entire performance, so if you haven’t yet tried everything that caught your eye on the first pass, you can go back while everyone else is singing praises to Jesus.

No, the irony of drinking and feasting during a gospel revival in Sin City is not lost on me. But the Las Vegas Gospel Brunch didn’t seem sacrilegious to me. In fact, it seemed joyous. This is probably why it attracts such a wide-ranging, cross-denominational and nonjudgmental audience. However, I will say I “witnessed” other people around me having a hard time eating during the show because audience participation is strongly encouraged and half the fun.

Saundra Alexander is the lead vocalist ahead of the choirs that change every week. Guest choirs come from around the country and in the past have included special appearances by performers like Stevie Wonder, Aaron Neville, Jackson Browne and Stephanie Mills. The St. Paul’s Concert Choir was featured the weekend I was part of the Hallelujah-singing crowd, and they have been one of the semi-regular choirs for the past six months here in Las Vegas. They also perform at the Los Angeles venue and may appear at the Gospel Brunch opening in 2009 at the new House of Blues in San Diego.

Alexander does a great job getting the audience riled up and involved by asking nonthreatening questions like “Have you heard of this man Jesus?” and “Who here has heard of Jesus?” She also gets folks celebrating birthdays, anniversaries and other special occasions to stand up and wave their arms as the choir hums and chants in the background. 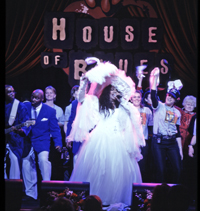 The St. Paul’s choir consists of nine women and three men backed up by a drummer, bass player, guitarist and, of course, the requisite mad-man organist. The band is tight. The choir is strong, devout in their personal faith and they really don’t need any of the microphones scattered across the stage to fill the room with their robust harmonies.

Those people celebrating special occasions who identified themselves at the beginning of the show are invited to come up on stage to sing with the choir at the end of the performance. Although the hip I’d thrown out two nights earlier playing “Guitar Hero” was feeling much better by the end of the show, my wife and I, who had just celebrated our third wedding anniversary, declined to climb up on stage. But one of the English girls was celebrating her birthday and you can bet she didn’t miss her chance to say she’d sung onstage at the House of Blues.

If you’ve got something to celebrate – or just feel inspired to spread some joy — join in with the choir at the Gospel Brunch at the House of Blues.

Note: If you can’t bring yourself to brave the outbound tourist traffic on Interstate15 on a Sunday morning here in Vegas, you can catch a Gospel Brunch the next time you’re in Chicago, Myrtle Beach, Orlando, Anaheim or L.A. The Gospel Brunch is also slated for the new San Diego House of Blues scheduled to open in mid-2009.

Gospel performers who are interested in auditioning for a House of Blues gig should contact Sylvia St. James, the national director of gospel talent for the House of Blues, who coordinates all the auditions and talent for the Gospel Brunches through her two companies St. James Entertainment and St. James Gospel Music Services.

2 responses on “Holy Rolling in the House of Blues”