Perhaps because the Strip blazes with so much artificial brilliance, I never appreciated the natural surroundings of Las Vegas before I lived here. Until I settled down and looked beyond the glitter, Red Rock Canyon, Valley of Fire and the Spring Mountains were invisible. These days, I appreciate it all, the snow-capped beauty of Mount Charleston, the changing colors of Sunrise Mountain, and the razzle-dazzle of the city, too. Here are several of my favorite places (please add your recommendations below!) to get bird’s eye views of the length, breadth, and glitz the Vegas valley has to offer.

1. The roof of the parking garage at McCarran Airport
Seriously! If you drive up to the top level, don’t be surprised to find professional photographers with fancy tripods. The airport parking garage provides a splendid view of the Strip’s skyline with the Spring Mountains in the background. It’s beautiful at sunrise, when the mountains are bright gold. It’s great at night, too, but tough to photograph at sunset unless you really know what you’re doing. Frugal tip: If you stay up there for less than fifteen minutes, you won’t have to pay for parking.

2. Alizé Restaurant at the top of the Palms
Yes, there are plenty of tall buildings on the Strip with gorgeous views of same. The Stratosphere is easily the most obvious one to mention, and Mix at the top of Mandalay Bay offers another iconic view you’ll recognize if you’ve ever watched the opening sequence of “CSI.” And of course there’s the Eiffel Tower at Paris Las Vegas. The Palazzo, Wynn, and Encore all have rooms with spectacular views if you want to look at Las Vegas from bed.

The Voodoo Lounge at the Rio used to have the best east-facing view of the Strip until George Maloof eclipsed it with the first Palms tower. The ghostbar provides a fabulous vista, but André Rochat’s sky-scraping restaurant takes the prize. Alizé not only has exquisite food, impeccable service and a world-class wine list, it has an intimate dining room that makes you feel like you’re in your own private aerie. Not for the budget-minded, Alizé would be worth every penny if it didn’t have a view. But what a view it has! 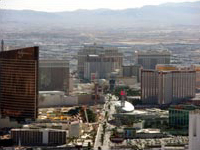 If you are watching your pennies, consider having lunch at the Stratosphere. You can eat at the Top of the World revolving restaurant for less than $20—at least half of what dinner could set you back. If you make a reservation, there’s no charge for the elevator ride to the top of the tower.

One last tall building I’d be remiss in omitting is the second Palms tower, where the view from the Playboy Club rivals the one from Alizé. (Some folks think the view inside is pretty appealing, too.)

3. The roof of the parking garage at Aliante Station
Aliante Station, the newest property in the Station Casinos lineup, offers a look from the north end of the valley from its parking garage. While this isn’t the most spectacular view of the Strip or the city, the more distant vantage point is great for getting a feel for the basin-and-range topology of southern Nevada.

4. A twilight helicopter ride or a nighttime landing or takeoff at McCarran Airport
If you’ve been lucky enough to fly into Las Vegas at night with a window seat, you already know how magical it seems as a glittery pirate’s treasure appears in the darkness and grows larger. When the plane comes in for a landing, you’re even luckier if you’re on the Strip side of the aircraft.

Another way to get that view is to take a twilight helicopter ride from McCarran Airport’s Executive Terminal. Book a trip for around a hundred bucks, and you’ll be picked up at your hotel, plied with champagne, and treated to an informational narrative as you gaze down at Vegas for eight minutes from a whirlybird. (I haven’t tried it yet because you have to reveal your weight. While I’ve been known to say, “I’d die before I told anybody how much I weigh,” I’d actually kind of regret causing a helicopter crash.)

5. Carmine’s on the Hill Italian Restaurant in Henderson
The city of Henderson has numerous high points and ridgelines that provide beautiful vistas of the city from the south end of the valley. One of my favorites is Carmine’s on the Hill, which is indeed perched on a hill at Carnegie Street and Horizon Ridge. The food and service are excellent at this 24/7 bar and eatery. If you score a window seat at sunset, you’re treated to one of the best light shows in town as the sky fades to black and the Strip sparkles to life.

6. Apex summit
While it might not be worth a drive all the way out Interstate 15 to Apex summit just for the view, I mention it because Las Vegas appears like a mirage when you’re driving in from the north. The effect is most dramatic at night. You’re rolling through the vast and arid desert, when—OMG! The neon oasis! 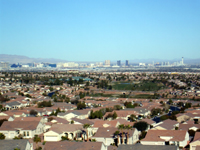 7. Ruth & John’s house
Don’t worry, Ruth and John—I’m not going to reveal your address. I just want to make the point that there are some lucky people who have spectacular views of their very own. In addition to view-blessed homes and apartments, there are many publicly accessible vantage points scattered around the edges of the valley. The best ways to find out about them are (1) explore and (2) keep your ears and eyes open. Linda Lou just revealed a trail I didn’t know about here on Living Las Vegas, for example. When I first moved to Las Vegas and took a little field trip up the side of Sunrise Mountain, I was awed by the views, which are especially lovely early in the morning, when the sun lights up the western side of the valley.

You can see the city from Red Rock Canyon, too. Many people don’t want to be reminded that there’s a big patch of bling nearby when they’re out enjoying nature’s wonders in the western foothills, and it’s easy to ignore. If you do want to see what man hath wrought, however, you can catch red rock-framed glimpses through the canyons as you drive the Blue Diamond/Charleston loop.

I could go on, but this is a basic rundown of the spots I’ve identified as especially good for surveying the Vegas valley from different points of view. Got more? I’d sure like to know about them, and I’m sure others will, too. Please share!