Mother Nature has her way.

Before Christmas, she generously dusted the Las Vegas Valley with 4 to 12 inches of snow, depending on the elevation. Schools were closed, and even McCarran Airport was silent. The Las Vegas Strip was upstaged by a magnificent blanket of white. Even old-time Las Vegans had never experienced such a winter wonderland.

On Christmas Day, the weather again turned stormy, lashing the Valley with wind, rain and sleet but bestowing more snow on the peaks of the Spring Mountains. Snowpack with a powder dusting is such a treat for us desert rats.

The morning after Christmas I was on the phone coordinating a backcountry snowshoe trek. Forget “Post-Christmas 60 Percent Off!” sales; get me to a secluded mountain pass. We targeted Mountain Springs, just 20 miles west of the city. This mountain-nestled community was once a watering hole on the Old Spanish Trail and later served as a Pony Express station.

We checked snow conditions with the world-famous Mountain Springs Saloon, which reported 4 to 12 inches of snow and a temperature of 32. The Mountain Springs pass was open and no chains were required, so we threw the snowshoes into the car and headed for fresh snow.

iStockPhoto/Sebastien Cote
Not your grandma’s snowshoes!

Arriving at 5,400 feet elevation west of Mount Potosi, we strapped on our state-of-the-art snowshoes and headed up a snow-covered dirt road and into back canyons and ridges. The afternoon air was crisp, the sky clear blue, and stillness hung in the air. With enthusiasm we climbed up and down ridges, skirting old mining roads. In silence we stopped to catch our breath and enjoy the snow-dusted pinyon pines and junipers. The yucca, Mormon tea and reddish manzanita lay jewel-covered in snow.

We began again, striding confidently through valley drifts, enjoying the exhilaration of foot-deep powder in places. There we were – unique and untouched – transported into a winter wonderland. This generous blanket of powder was nature’s Christmas gift for Las Vegas in 2008. 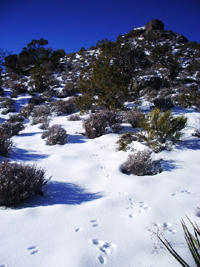 Photo by Ellen Ross
Fresh animal tracks on the trail

Dazzled by the freshness of the snow, I scanned the trail and spotted some animal tracks. Bighorn sheep, deer and elk frequent various springs in this area. Curious to study, some looked like small bird prints, while others were rabbit or squirrel tracks. Each trail of animal tracks told its own story – etched in the crust. Another day or two and all evidence of the animal paths would melt away; our special desert snow would melt into the canyon slopes – so elusive. The much-needed moisture will help refill underground aquifers and travel into washes and eventually reach Lake Mead. Who could have asked for a more magnificent gift – snow in the desert!

I only hope to have another winter afternoon this year to snowshoe trek into the sunset. In the quiet canyons of Mountain Springs, snow shimmers in the fading desert light.