Vince Lombardi said, “Football is like life. It requires perseverance, self-denial, hard work, sacrifice, dedication and respect for authority.” That says it all. Eleven guys with one goal and another 11 guys trying to stop them – all selfless, motivated and focused. Every fall, football fans gather weekly to watch the battles of modern-day gladiators. To cheer on those who satisfy Coach Lombardi’s requirements well enough to consider the sport their profession is a pleasure. To do so while enjoying the camaraderie of fellow football fans is even better.

Now comes the Super Bowl, the ultimate clash between the two teams deemed the world’s best. Las Vegas is a great place to see it, but where is the best place to watch? Despite the constraints placed on them by the National Football League, the sports books at the casinos will still be the choice of many fans. After all, they have huge screens, an enjoyable atmosphere and betting. Off the Strip, however, is where you will find one of Las Vegas’ best-kept secrets: neighborhood sports bars. Here are three that I especially enjoy.

Photo by John R. Taylor
Their Ns may be backwards, but
Kerry’s Sports Pub will be a
terrific place to watch the game

Kerry’s Sports Pub
Have you ever gotten a neck cramp after sitting twisted in some weird yoga-like position for two hours at a sports bar because you had your back to the TV the whole time? That’s not going to happen at Kerry’s Sports Pub. No matter where you are in the pub, a large LCD flat-panel screen of the Big Game will be within unobstructed view. I think there is only one wall in this place that doesn’t have at least big TVs mounted to it. There is also a huge projection screen suspended from the ceiling in the northeast corner of the room. I have never had a long wait for service at Kerry’s. Despite having a full bar, a games area (with pool tables and dartboard), and a spacious dining area to wait on, the staff manages to be prompt, pleasant and courteous. Kerry’s Sports Pub is located on North Rancho Drive, north of Cheyenne. 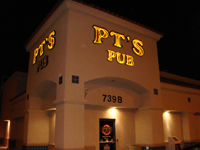 PT’s Pub
Although it’s part of the giant Golden Tavern Group corporate franchise, the PT’s Pub on South Rainbow manages to have the look and atmosphere of a great neighborhood bar. A wide range of appealing amenities, including a lounge filled with sofas, a dining area and pool tables, adds to the great service. During my most recent visit, just after the New Year’s, Nicole, one of the bartenders, made sure that no one was left waiting for food or a drink. Every time my glass got low, she was there to make sure another brew was coming right up – and that’s important whether your team is winning or losing. This particular PT’s Pub is south of Alta on Rainbow Boulevard. 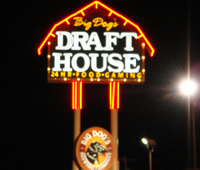 Big Dog’s Draft House
A state-of-the-art microbrewing facility provides the clientele of Big Dog’s Draft House with a choice of several fresh handcrafted beers. This is in addition to the vast menu of other drinks served. A rather large dining area provides great meals on three separate menus (breakfast, kids, and lunch and dinner). Claiming to be a place where “Midwestern hospitality prevails,” the Draft House has a beautiful barn design that I am sure makes my fellow Midwesterners nostalgic. The place seats almost 200 and has been open more than 20 years. In addition, over the course of the football season they offer $3 drink specials and a chance to win over $75,000 in football memorabilia as prizes on game days. Big Dog’s Draft House is on North Rancho between Craig and Lone Mountain.

As you go out to view the ultimate clash in professional football, remember to consider the nearby bar. It is certain to be a great time.

Got other good sports bars to recommend for the Big Game? Tell us about them below.

6 responses on “Super Bowl 43: Places to Watch the Big Game”