Ever since my beloved late uncle took me along for a night in his Boston cab when I was about 21, I’ve had an interest in the business of ferrying people by land. I decided to spend a day doing a taxi “ride-along” in Vegas, both to enjoy a glimpse behind the scenes of local life and to find a good cab company for locals in need of safe and efficient transportation for hire. I was happy to succeed on both counts.

Jon Gathright and Bob McCullough at A-Cab Taxi were kind enough to arrange for me to spend a day as a trainee in the cab of 12-year veteran driver Al Catoggio, a Philadelphia native who works the day shift. Catoggio has seen it all and told me that he prefers the day shift now because it affords him a better personal life and because he grew tired of drunken out-of-town women flashing the in-cab camera at night (I can’t imagine that he was serious about this, paragon of virtue that I am not). His taxi was a 2006 Chevy Caprice that ran beautifully despite its heavy workload.

Because A-Cab Taxi can only pick up passengers west of Interstate 15, the company is a good choice for Westside folks in need of a ride. Catoggio mentioned that most of A-Cab’s business comes from customer calls for arranged pickups and that 90 percent of the time the company can have a cab at any Westside address in 15 minutes or less.

Our first customer was a pleasant-enough chap whom Catoggio had also transported a bit earlier that morning. The gentleman had gone shopping—I watched Catoggio load two half gallons of off-brand vodka, a gallon of Clamato juice and a chicken (packaged, not living) into the trunk. The customer perfumed the interior of the cab with the essence of alcohol breath. While Catoggio and I agreed that the man deserved credit for leaving the driving to someone else, his choice of morning groceries was a poignant window into one Valley denizen’s life (and he lived in a nice home). We both hoped that he would eventually find a happier way to spend his day.

Another regular customer was a pleasant woman originally from Wisconsin who called in for a taxi to take her on her morning errands. We stopped at her bank, a pet food store (where Catoggio and I determined in an unscientific survey that two of three exiting patrons shared demeanors with their dogs) and Home Depot, where Catoggio loaded a 60-pound bag of rock salt into the trunk (the passenger said she uses it to soften her water). The highlight of the trip came at the supermarket, where our customer discovered a substantial markdown on personal-sized pizzas. Catoggio declared it “Pizza Day,” and seconds later we received our affirmation when we spotted a man standing on the corner of an intersection advertising a pizza buffet. At the end of the ride, the woman introduced us to her dog and gave Catoggio a generous tip.

While we were waiting for the lady to finish her shopping, Catoggio mentioned that another leading source of radio calls is people needing rides to medical appointments. A few other interesting tidbits: The ribs are phenomenal and affordable at Ellis Island (recently profiled by our very own lovely and talented Linda Lou); a surprising number of strippers lead fairly lonely personal lives; and small, 24-hour pubs often serve tasty and affordable eats.

Our final passenger was a young man who told us that his primary business was buying broken-down cars, making enough repairs to keep the cars running until they got down the street (for example, using block sealant to disguise a severely cracked engine block), and then relying on the “as is” law to keep all the proceeds scammed from his lower-income victims. He also alluded to “side deals,” which effectively ended the conversation. For the next half mile, only the dispatch radio and the crickets pierced the partition of silence between front and back seat. “I love marijuana,” the man later remarked to no one in particular. “I couldn’t live without it.” Marijuana, oxygen—what’s the difference? 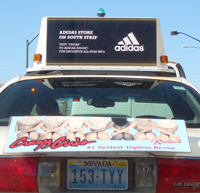 Catoggio told me that two of his most memorable fares were Magic Johnson (to McCarran Airport) and Carmen Electra (to the now-defunct Barbary Coast). Other passengers are memorable for all the wrong reasons, like throwing up in the car. Fortunately, A-Cab owns all its vehicles (in Boston, many cabs are owned by individual drivers and merely wear company colors), and the company doesn’t hesitate to take a vehicle off the road midshift to ensure a suitable environment for subsequent customers.

Catoggio likes working for a smaller company with a personal touch and a diverse work force—evident in the many accents audible through the dispatch radio. He pointed out that drivers can earn a solid income while enjoying substantial workplace freedom; there are no paper jams or “thinking-outside-of-the-box” meetings, though the company does have a weekly employee barbecue.

“I love this job,” he said. “I like to provide good service for my customers, and that helps me to maximize my gratuities.” As I saw on the streets, Catoggio’s positive attitude does translate into good service and tips. If he worked in an office, he might call it a “win-win.” Unlike just about every other major city in the United States, where hailing a cab curbside has become an “art form” it is illegal for a driver to stop and pick up a passenger on a public road — Cabs can pick-up fares on private property and the various businesses around town have created some ingenious means for alerting cabbies of potential work. One of these are those revolving red siren-like lights seen near the driveways of businesses like drug stores, and some of the smaller casinos. Here is the official Clark County ordinance that covers this aspect of the cab business.

11 responses on “Keep the Meter Running: A Day in a Vegas Taxicab”