Las Vegas is arguably the strip club capital of the world, so it’s only right that Living Las Vegas give the clubs some coverage. I consider myself the right man for the job, as I’m biased neither for nor against them. Neutral, that’s me. In the interests of journalism, I have drawn upon my own experiences and those of a few keen observers of Vegas night life – taxi drivers from companies around town – to give you some background on what are euphemistically called “gentlemen’s clubs.”

Photo by Megan Edwards
Déjà Vu Showgirls — all nude and
fruit juice, too

In fact, there are two types of clubs. “Topless” establishments serve alcohol, feature dancers 21 and older, and require the performers to don a loincloth or other midsection covering. “Nude” establishments, on the other hand, showcase entertainment au natural. Except in North Las Vegas, the nude clubs do not serve alcohol; fruit juice is a popular alternative, and most such clubs are proximate to sellers of booze. These clubs present dancers 18 and older. Most of the big joints are topless clubs; they are mostly to be found near the Strip or in the industrial areas just to the west. The locals’ places, which dot the Valley, also tilt toward topless. Most of the places described in this article are topless clubs; if you’re looking for a nude establishment, check out Palomino (also serves alcohol), Déjà Vu Showgirls (no booze), and Little Darlings (also booze unfriendly).

Many of the large topless clubs near the Strip offer similar experiences: lots of attractive women (and men, too, in some places), expensive drinks, the opportunity to enjoy an evening in the presence of pulchritude, and the chance for the feckless to lose money much faster than at the blackjack table. The girls are usually smokin’ hot, though generally more slender than voluptuous (think Scarlett Johansson with silicone enhancement, rather than Marilyn Monroe). Those who prefer a more Rubenesque portrait of female beauty might do better in a more locals-oriented establishment. 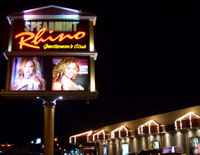 Among the large clubs near the Strip, the cabbies’ consensus was that Cheetahs (topless, featured in the epically awful movie “Showgirls”) is a safe bet with a good mix of locals and tourists. Spearmint Rhino (topless) and Treasures (topless, where one can also enjoy a steak dinner) were cited as classy joints. Cover charges generally range from $20 to $30, though enterprising customers can sometimes elude them by presenting a local ID or by special arrangement with a cabbie or club.

Lap dances usually cost $20, and cigars $10 to $25. Champagne prices vary but can range as high as $500 for a bottle. The VIP rooms will almost always involve multiple pictures of Benjamin Franklin. What does Mr. Electricity’s portrait get you, exactly? About the same as what you get out front: gyrating personal attention, a prolonged face full of “goodies,” and dances during which the performers might grope and grope, but you don’t. Sex is not for sale here, though I’m told that in the history of Vegas strip clubs there have been instances where customers and dancers have made private arrangements. (Note to morons: Don’t give a stripper $80 with the “understanding” that she will come to your hotel room hours later, as a customer in one of the drivers’ cabs did recently).

Given that the dancers’ primary objective is to spread the wealth from you to them, it is essential to be careful with your money. My advice to gentlemen is the same as my advice to gamblers: Set a budget and stick to it. If you want to spend a few bucks and enjoy a couple of lap dances, you can probably achieve your goals for less than $100. If you follow the path of many wild-eyed tourists and lose control in an alcoholic haze, it’s easy to end up with an obscenely large tab. To keep from overspending, I suggest you bring cash and leave the credit cards at home. 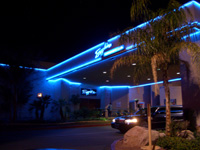 I once visited Sapphire, “The World’s Largest Gentlemen’s Club!” (topless), as a customer. Friends visiting from California knew one of the club’s employees. The women were gorgeous, it’s true (Sapphire also has male performers, as does the Olympic Garden, another topless club), but the action was a bit hectic for my admittedly subdued tastes and there was an assembly-line quality to the ladies’ attentions that wasn’t entirely pleasant. I spent a six-pack’s worth of cash for a single Heineken and felt like King Kong at the top of the Empire State Building, fending off aggressive airborne attackers – in my case, girls seeking to sell lap dances. I got long fingernails dug into my shoulder by a hot woman after refusing her advances, and not even in the good way (there’s a sentence for the ages). (Here’s another take on Sapphire by six LLV writers who visited recently.)

Places to avoid? One cab driver emphatically cautioned against patronizing Glitter Gulch (topless). Strategically located on Fremont Street, the Gulch often takes advantage of its position to coax customers out of $50 while fulfilling the two-drink minimum, according the driver, who requested anonymity.

Photo by Chris Arabia
Larry’s Villa: not fancy, but neither
is the price of beer

For a more local touch, I’d suggest finding a place far from the Strip such as Larry’s Villa (topless) located on the Westside on Bonanza just east of Rancho. Larry’s has a relaxed atmosphere and the beer costs the same as at a regular bar. Easties and Hendersonians might do better to find a similar spot in their areas, such as The Library (topless) near Boulder Station.

If these straitened economic times have you valuing frugality, one last option is the Showgirl Video club north of the Strip, at 631 S. Las Vegas Blvd. For just $1, according to one of the cabbies, you can watch a nude dancer – briefly – through a pane of glass.

Special thanks to Dana Hinks and the other fine folks at A-Cab Taxi, the subject of a previous column, for their assistance; Westside folks can call the cab company at (702) 369-5686 for transportation to a gentlemen’s club or other locations.