While the benefits of physical fitness are unlikely to speak for themselves until someone invents the talking mirror or cardiogram, getting in shape does nourish both body and mind. Fortunately, the Las Vegas Valley has a wide range of health and fitness clubs with great services and prices as low as $22 per month.

The best advice I can offer is to avail yourself of trial memberships at two or three clubs. Resist the sales pitch until you’ve had a chance to see how each facility, its location and its hours work for you. To provide a quick overview, I checked out three prominent health club franchises in the Valley: Gold’s Gym, 24 Hour Fitness and Las Vegas Athletic Club.

One of the world’s most famous fitness chains is Gold’s Gym, which has six locations in the Valley. “We’re a no-nonsense gym,” said a Gold’s employees when I stopped by the facility at 7501 W. Lake Mead Blvd. in Summerlin. “You come in, lift, do some cardio, and you’re done.”

He was right: Gold’s is a basic gym. There are large cardio and weight rooms (offering both free weights and machines), a ladies workout room and lots of classes – everything from “Body Combat” to “Zumba.” The locker rooms have small saunas (the ladies locker room is probably nicer than the men’s, but I’m riding a long incarceration-free streak and opted not to explore). This particular club is also affiliated with a tanning salon next door, but it doesn’t have a pool.

Gold’s membership offers change frequently. I know someone who pays $30 monthly for a membership and he paid no additional fees at signup, which was a good deal, so that might be a good low-end ballpark figure. Tanning plans for members start at $10 a month, according to the man at the desk. Gold’s members also enjoy guest access to any Gold’s Gym worldwide. This perk comes in handy when facilities or offerings change; for instance, the gym I visited is no longer open 24 hours on weekends, but members can go to two other Valley locations if they wish to work out late on a Saturday night.

Another well-known gym with a large Valley presence is 24 Hour Fitness, which has 15 clubs in the area. I went to the one at 641 S. Rainbow, which operates 24/7. It’s a nice club. The facility is aesthetically appealing and it has an aquatics center with an Olympic-size swimming pool, a steam room, a sauna and a Jacuzzi. When I traipsed by the hot tub, two people sitting in the water were trying to extricate their tongues from each other’s mouths, but evidently not trying hard enough. Whether they were longtime intimates or had just bonded over a rigorous set of squat thrusts, I couldn’t really say.

The club offers a full complement of machine and free weights, cardio equipment, classes and exciting extras such as rowing machines (just like real rowing but without the chance of the oar knocking you out of the boat, as once happened to “a friend” long ago).

Membership at 24 Hour Fitness comes at several price levels depending on whether you want multi-club access, whether you’ll accept restrictions on when you can work out, and which type of club you select (the different locations have slightly different offerings). For the South Rainbow location, the best value seems to be full access to that club only, which costs $31.99 monthly plus a down payment of $83.97 to cover first month, last month and an activation fee (all subject to change, of course). The Web site has more details, probably for different offers by now. 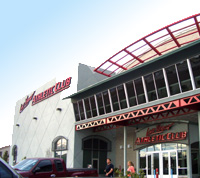 Finally, we come to Las Vegas Athletic Club (LVAC), which has six Valley locations. (The Web site features a comely Slavic lass in the introductory section, though that’s probably not a good basis for selecting a gym, at least not in and of itself). I checked out the club at 1741 N. Rainbow, which has 24/7/365 service, presumably for those who want to begin working off Christmas dinner – on Christmas. The club is housed in a massive building that also houses an independent boxing-style gym and a tanning salon. The offerings were exhaustive – cardio equipment, a full roster of fitness classes, a running track, racquetball and aquatics, to name most of it – and the place was jumping both at midday and at 10 p.m., the times of my two visits.

The representative with whom I spoke respected my confession that I was in a hurry – within a minute, he broke down the various membership options, including a $22 per month membership (no perks but full access to the facility except racquetball) with only $5 down. He did mention, of course, that prices are subject to immediate change so I couldn’t take the price sheet home.

Overall, my impression is that Las Vegas Athletic Club and 24 Hour Fitness offer the best value for the money. The major difference between the two appears to be in the atmosphere. If you’re looking for a place with more of a “scene,” LVAC is probably the way to go. For a more subdued environment, 24 Hour Fitness might be the better choice. For those seeking a simpler workout without aquatics, Gold’s is a viable alternative. Proximity to your home and the hours of the clubs closest to you are other factors worth considering.

4 responses on “Get Pumped Up, Las Vegas!”