Las Vegas revels in the new. New shows, new casinos, new housing developments – the attention is on the bright and shiny. The old is barely noticed, let alone celebrated as it is in more tradition-loving locales. In fact, not every Vegas neighborhood has sprung up since 1980. In a few places, even in the bustling suburbs, there are some genuinely older neighborhoods. One of these areas is the old Henderson Townsite, which has an interesting history.

Tent cities sprang up in the oldest part of Henderson in the 1930s, during the construction of Hoover Dam. Shortly after that time, a magnesium processing plant, needed for the coming war, opened behind what is now a Target store and associated mall on Lake Mead Parkway. The magnesium workers needed places to live, so in 1942 hundreds of houses were built near the plant, laid out in two main sections: one for whites and another for blacks. (The black section, called Carver Park, was designed by Paul Revere Williams, the same acclaimed black architect who designed the La Concha Motel, whose lobby was recently moved to the Neon Museum in Las Vegas.) The two neighborhoods, which together occupy about 7,000 acres and came to be called Henderson Townsite, were completely desegregated many years ago.

All the Townsite houses were built of clear redwood on what today seem like very large lots. They were offered for sale to their occupants in 1949, though many of the plant workers had moved away as the demand for magnesium dropped sharply with the war’s end. Remarkably, most of the old houses remained standing. They are now home to a new generation of Hendersonians, perhaps 10,000 people, who are enjoying Townsite living in the old Townsite houses.

My interest in these houses stems from a simple fact: I live in one of them.

Consider, if you will, two photographs included herewith. Both are pictures of Henderson Townsite houses built in 1942. The first house, shown with a plaque declaring it to be a Townsite House, is located in the Clark County Heritage Museum, on South Boulder Highway a bit south of Racetrack Road. It shows the house as it was first built: a single-story, three-bedroom house of about 1,100 square feet, with 100 percent clear redwood construction. The second picture shows a house that was built to the identical plan. Though this picture is taken from approximately the same angle and position as the picture of the museum house, it’s hard to see the resemblance. In fact, most of the surviving Townsite houses have been remodeled and reconfigured again and again over the years. Yet they all, at one time, conformed to one of two floor plans: a two-bedroom model, one of which my wife and I rented when we first moved to Vegas, and a three-bedroom model, like the one we live in now.

Our house has undergone two additions. We were able to trace them – and figure out the original floor plan – when we pulled up some flooring and discovered marks where the walls used to be. The original floors are solid redwood, and quite lovely. Unfortunately, the additions to our house used concrete and plywood flooring, so only one room has the original flooring exposed. It is the room in which I am writing this article, in fact. In the rest of the house, carpeting, oak flooring and tile are hiding the redwood, concrete and plywood floors. 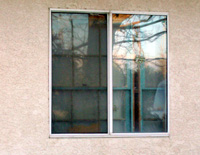 Photo by Steve Fey
Here’s a novel approach to
preservation: encase the old house
inside the new one!

What is remarkable about these Townsite houses, which are now almost 67 years old, is that they were not intended to be permanent. They were “dismountable” workers housing, built to last for the duration of the war and no more. But the magnesium plant, which is still operating, never left and neither did the workers. And so, during the 1950s the City of Henderson incorporated around the old Townsite. Since then, Henderson has grown to become the second-largest city in Nevada, expanding to meet Boulder City on one side and Las Vegas on the other. Most of the housing in Henderson is of late 20th- and even 21st-century origin, but the original Townsite remains.

The city of Henderson has a redevelopment agency which has helped us install new windows, stucco and landscaping as we have spruced up our Townsite house. They will do the same for any Townsite homeowner, in fact. As a result of these efforts, an area of town that was once famous for rundown houses and urban blight is slowly transforming into an area of very nice housing and urban amenities. The area we live in, the Water Street District, is the home of parades, concerts, an arts district and festivals like the Super Run, which I wrote about last year. New restaurants have opened in the last few years as well, and Nevada State College has its administration and high school in a building on South Water Street.

If you are interested in more traditional, character-rich neighborhoods than are available in most Las Vegas suburbs, you should check out the old Henderson Townsite. Not only are the houses interesting, but you’ll pay less per square foot than you would in most new developments. As the area develops a new identity for the 21st century, these houses will not only survive but thrive under the kind attention of their new occupants.

For more history of the area, visit the Clark County Museum and read this article from the Las Vegas Sun.