Last summer I met oral historian Lisa Gioia-Acres at a social gathering for writers and we hit it off instantly. I dig fun-loving chicks and Lisa and I have a lot in common. We’re both from upstate New York, we’re almost exactly the same age (she’s two weeks older, I’ll have you know), we were married around the same time, we each have two kids, and we’re both free spirits who refuse to act like the grandmothers that we are.

But our childhoods were nothing alike. Soon after Lisa’s first birthday, in a horrific scenario of domestic violence, Lisa’s father killed her mother and then took his own life. Lisa and her three older brothers were brought up by their maternal grandmother, who had already raised a dozen children of her own.

Lisa grew up not knowing much at all about her parents. She’d hear stories, and people would remark that she looked like her mother, but any questions she asked were evaded. Determined to learn more, and to fill the void of loss, she became proactive in uncovering the lives of the parents she never knew and the circumstances surrounding their deaths.

The brutal event that occurred 50 years ago has shaped Lisa’s path in life profoundly. She pursued a master’s degree in history and today works as an oral historian, documenting lives and stories as she helps find connections to the past. In addition to working for the Oral History Research Center at the University of Nevada, Las Vegas, where she collects oral histories for the university archives, she is currently a contract historian on a project for the U.S. Forest Service entitled “The American Settlement of Mount Charleston.” The information she’s gathering will be presented in interpretive exhibits in the visitors center for the new 2,500-acre Middle Kyle Canyon recreation complex in the Humboldt-Toiyabe National Forest. Construction is expected to begin this summer.

Located just 30 minutes from downtown Las Vegas, Mount Charleston is the highest peak in the Spring Mountains and is a year-round getaway for Las Vegas residents and visitors. The Las Vegas Ski & Snowboard Resort is a popular destination for locals in winter. In summer, the mountain’s cool temperatures – typically 20 to 30 degrees cooler than in the valley – draw residents seeking a reprieve from the scorching heat. I, for one, have enjoyed refreshing cocktails on the deck of the Mount Charleston Lodge, 7,700 feet up the hill at the end of Nevada Highway 157, while Las Vegas baked in 110-degree mid-July heat.

In the course of her research, Lisa has collected stories from several longtime area residents. Tom Padden Jr., for example, remembers digging out of the snow before dawn each winter morning so he could catch the bus to school in Las Vegas. That was before Lundy Elementary School opened in Mount Charleston, in 1960. Today that school serves nine Mount Charleston students in a one-room schoolhouse. Imagine, a one-room schoolhouse just minutes from the glitz of Las Vegas! At the end of January it received a stay of budgetary execution when the Clark County School Board voted to allow the school to remain open for at least another year. 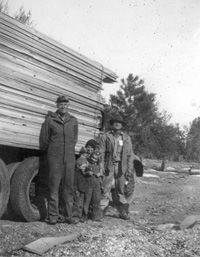 Lisa also talked to Edith Mofford Lenzi, whom she scouted out after finding Lenzi’s unpublished manuscript in the Mount Charleston library. Lenzi wrote her story to recognize her father, the founder of the Mofford sawmill, and his contributions to the area. She details life in this rustic setting and how she, her brother and her parents lived in a tent on the mountain year-round from 1946 to 1952. And I’m ready to call 911 when my cable goes out.

Lisa has spoken most extensively with Dick Taylor, Mount Charleston’s unofficial town historian. Taylor, who turned 80 on January 31, told her about the 1962 fire at the old Mount Charleston Resort Lodge (where the library and fire station now stand), and how people scrambled through the debris looking for coins. He also recalled the day the power company turned on the electricity in Mount Charleston – and the ensuing silence when the community’s generator was idled.

People back then came together as a community, Taylor told Lisa, with everyone wearing different hats as needed. Taylor, for example, was a member of what was called the “sheriff’s posse,” a group of men who sometimes performed search-and-rescue duties on the mountain. Most famously, the posse responded to a call on Nov. 17, 1955, when a C-54 transport plane crashed into Mount Charleston during a blizzard, killing 14 men. The official story was that the plane was an Atomic Energy Commission charter to the Nevada Test Site, but that was a cover. More than three decades later it was revealed that the aircraft was carrying CIA agents and U-2 spy plane designers on a top-secret mission and was believed to have been headed to Area 51.

Lisa’s conversations with longtime residents will be preserved on a recorded disk so future researchers can benefit from the work she has done. “Without talking to people who actually lived through those times, you miss the most important nuggets of insight,” she told me. “It’s just not the same as putting together information from newspaper articles. I get to hear the nuances of the way people speak.”

As I listened to Lisa enthusiastically recount the tales she’s been told, I was struck by the sad fact that she’s never heard the nuances in two particular voices: those of her own parents. Her bubbly personality belies her personal tragedy, a tragedy that has led to her life’s work of understanding the past so it can be cherished in the future.

To get to Mount Charleston, take U.S. Highway 95 north from the Strip and then head west on Highway 157. The left turnoff is prominently marked; just follow the signs up the mountain.

7 responses on “An Oral Historian’s Path to Mount Charleston”