One of the best kept secrets in Las Vegas is that the city has several vintage neighborhoods containing a treasure trove of “Modern”-style houses. Most houses built between about 1940 and 1980 fit into this category, whether they are called ranches, ramblers, Desert Modern, Palm Springs Modern or simply Mid-Century Modern. Together these houses define a style of architecture that emphasized open floor plans and ample windows, with the goal of opening up interior spaces and bringing the outdoors inside.

These houses from the ’50s and ’60s evoke the era when Frank, Dean, and Sammy ruled this town. There has been a revival of love for Mid-Century Modern design, with enthusiasts for all things retro seeking out homes from the Atomic Age. In the current housing crisis, a lot of these houses have come on the market at bargain prices. A few are in pristine condition, but most require a bit of effort to restore them to their former glory.

In Vegas, nobody knows more about what’s available in the Mid-Century Modern market than real estate agent Jack LeVine. Jack blogs about Mid-Century homes at VeryVingtageVegas.com, a site filled with information and photos of Mid-Century homes and design in Vegas. As my husband and I have been searching for our own “forever home,” Jack has taught me where to find the best examples of Vegas’ vintage modern houses. Don’t bother looking in those master-planned communities on the outer rim of the Vegas Valley, such as Summerlin, Green Valley or Mountain’s Edge. No, if you want to find the cool modern houses with the retro style, you have to go to vintage Vegas – the neighborhoods around Downtown and the Strip. 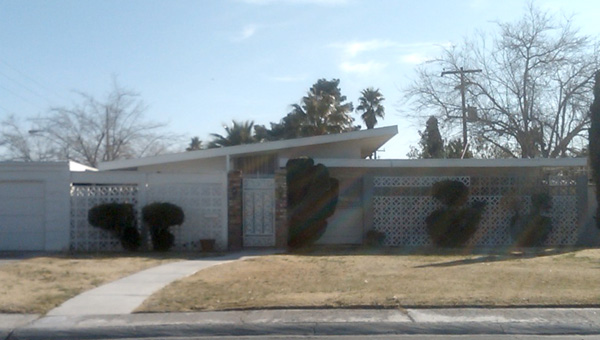 One neighborhood filled with Mid-Century Modern homes is Paradise Palms. This neighborhood, which is bounded by Karen Avenue to the north, Viking to the south, Maryland Parkway to the west, and Eastern to the east, surrounds what was once the Stardust Golf Course, today known as National Golf Course. The neighborhood was developed in the 1960s by Irwin Molasky’s Paradise Development, which had just built Las Vegas’ first indoor mall, the Boulevard Mall, on the western edge of Paradise Palms.

The homes in the neighborhood were designed by the architectural firm of Palmer and Krisel, the same firm that made Mid-Century Modern architecture accessible to the middle class by designing custom-looking tract homes in Palm Springs. Although the floor plans of the houses are basically the same, the houses have different rooflines and are placed at different angles on the lots. The result is a custom look to each home, and all have the basics of Mid-Century style: post-and-beam construction on slab foundations, stucco finishing, open floor plans, high windows and decorative block screens.

Another neighborhood graced with some vintage beauties is the Scotch 80s, an area bounded by Charleston to the north, Interstate 15 to the east, Oakey to the south and Rancho to the west. The homes here really were custom built, on fairly large lots, so there are a variety of architectural styles, including many excellent examples of Desert Modern styles. The name “Scotch 80s” comes from the fact that in 1911 Las Vegas’ first mayor, Peter Buol, bought the 80 acres of land here, using funds from Scottish investors. While development didn’t occur until the ’50s and ’60s, the area retains its attraction for mayors, as this is where Mayor Oscar Goodman now lives.

You can find more Mid-Century Modern homes in the clusters of neighborhoods surrounding Downtown, including the John S. Park Historic District, Marycrest and McNeil Estates neighborhoods, among others. [If you click “View Larger Map” on the map to the left, we have identified the location of five of the vintage neighborhoods in this area.]

Despite the tendency to implode history here, there are efforts to preserve these vintage neighborhoods. Among those fighting for Las Vegas history are the Friends of Classic Las Vegas. This volunteer organization promotes various preservation events, hosts regular meetings with speakers on topics of historical interest, and is engaged in gathering oral histories of longtime Vegas residents.

The Junior League of Las Vegas has done its part, too, lovingly preserving the Morelli House, a wonderful example of Mid-Century Modern style that was owned by Antonio Morelli, the orchestra leader at the Sands Hotel. The custom-built house was originally constructed at the exclusive Desert Inn Country Club, but it was moved to its current location at Ninth and Bridger in 2001 to preserve it. Furnished in designer styles from the ’50s and ’60s, the home is available for viewing by appointment. Or come out to the Junior League’s “Morelli and His Music” event on April 2, 2009; a tour of the home is part of the program.

Today’s Vegas may glorify clubs with bottle service and celebutantes behaving badly, but for me the real Las Vegas is found in its vintage style.

If a master-plannned community is of more interest to you, click here to read Tami’s take on Summerlin, the 22,500-acre property being developed on the west side of town.

7 responses on “Las Vegas: Where Vintage Is Modern”