I want to experience two things before I die. (Actually, three, but Jessica Alba isn’t returning my calls.) First, a close encounter with an alien, minus the medical exam. And second, a meet-and-greet with a ghost. Because aliens seem rather hit or miss, the spirit world option appears to be the better bet. 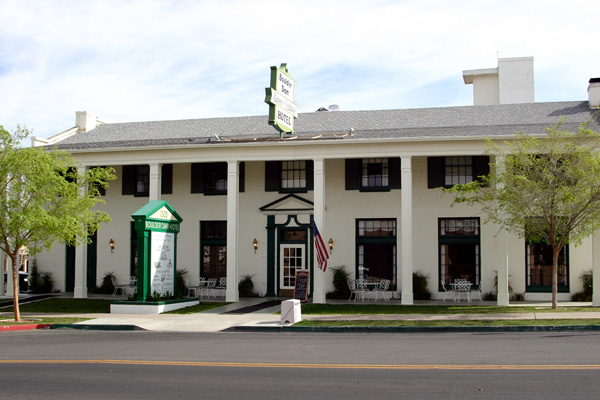 For years, I’ve heard stories about the Boulder Dam Hotel being haunted. Objects appearing and disappearing in thin air. Chilling noises echoing through the halls. No disembodied heads or redrum-inscribed walls (to my knowledge), but enough clues to make it a logical place to begin my quest.

According to the book “The Secret Life of the Boulder Dam Hotel,” by Dennis McBride, “There have been reports of spirit activity at the Boulder Dam Hotel for years.” Especially in the basement. So, when my wife makes our reservation (for Friday, March 13, of all dates), she casually mentions the ghost thing.

“We don’t condone those stories,” the clerk tells her icily. Seems like they’re missing a golden marketing opportunity. Still, it’s clear I’ll be getting no cooperation from the staff. I’ll have to go undercover. 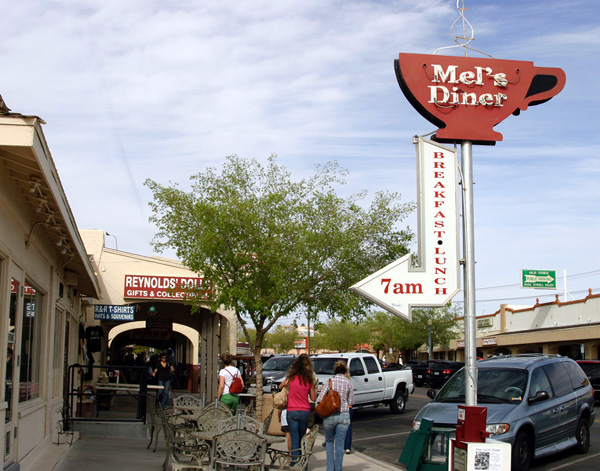 If you’ve ever visited Hoover Dam or Lake Mead, chances are you’ve driven through “Clean, Green Boulder City,” as the local Chamber of Commerce has branded the town. Just 30 minutes south of Las Vegas, there’s no place in the state quite like it. Built by the federal government in 1931 to accommodate the sudden influx of workers hired to build the dam, Boulder City looks and feels like a quaint Midwestern burg somehow plopped down in the middle of the desert. The city’s controlled-growth policy has preserved the old-time atmosphere, and there are plenty of parks, shade trees, museums, antique shops, art galleries and funky diners to choose from. From its earliest days, gambling, drinking and prostitution were banned within the city limits, restrictions designed to keep dam workers safe and focused. Today, Boulder City is one of only two municipalities in Nevada that prohibit gambling.

The Boulder Dam Hotel, situated on a cobblestoned street in the heart of downtown, is a white, two-story colonial-style structure built in 1933 to accommodate visiting government and corporate bigwigs overseeing the construction of the dam. (“Hoover Dam” is now the dam’s official name, although most people say “Boulder Dam” interchangeably.) The hotel was fully remodeled in 1980, and two years later it became the first Nevada hotel accepted into the National Register of Historic Places. The hotel is flanked by an old-fashioned ice cream parlor, a 1930s-style drugstore and market, and the Boulder Theatre, a historic landmark in its own right, currently gearing up for an “I Love Lucy” tribute in April. (Desi Arnaz Jr., Lucille Ball’s son and a longtime Boulder City resident, owns the theater.) Replace the modern cars with their Depression-era counterparts, and the street looks much as it did 80 years ago. 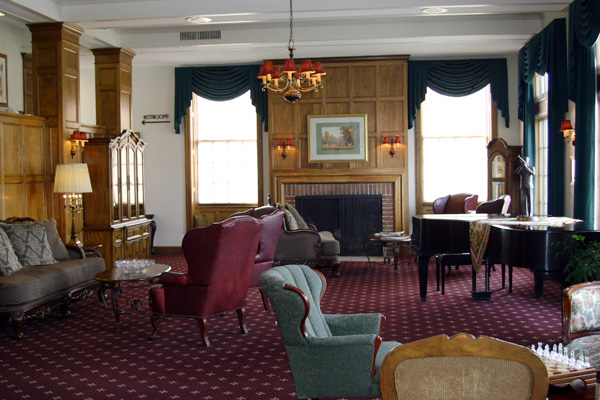 So does the hotel, for that matter. The lobby, decorated in rich maroons and greens, is anchored by an oversized fireplace and features a grand piano surrounded by intimate groupings of settees and high-backed red leather chairs. A framed sepia-toned photo on the wall reveals how closely today’s interior mirrors the original.

At the front desk, a cheery red-haired woman named Sandy greets and processes us in less than five minutes. Our room, with our AAA discount, runs $85.50 for the night and comes with two complimentary continental breakfasts and two free passes to the Boulder City/Hoover Dam Museum, housed in the hotel.

“We’re a private, nonprofit hotel owned by the Boulder City Museum,” she informs us. “So technically, you’ll be sleeping in a museum.”

Ah, a night in the museum. What better way to bump into a ghost?

Sandy hands us an actual key, not one of those electronic jobs, and we walk up one flight of stairs to room 209. The hotel has only 22 rooms, so everything is convenient. You could fit the whole building into the penthouse suite at the MGM Grand.

I don’t know about you, but I’ve always opened hotel room doors with a sense of anticipation. Like Forrest Gump’s box of chocolates, you never know what you’re gonna get. This room lives up to expectations. Cozy and comfortable, nicely appointed with blonde oak furnishings and retro-style lighting fixtures. The smallish bathroom is all tile, with a pedestal sink, a tub/shower combo and big, fluffy towels. All in all, about the same sense of darkness and foreboding you’d get on a visit to Grandma’s house.

After a brief discussion, we decide to grab dinner at the hotel restaurant, named “The Restaurant at the Boulder Dam Hotel.” (No doubt, these folks could use some marketing help.) Located just off the main lobby, the restaurant’s dinner menu is limited, mostly appetizers with a handful of entrees thrown in.

My wife orders chicken pot pie; I opt for the steak salad. Both meals are better than expected, especially the pot pie, which has gigantic chunks of white meat swimming in a traditional cream sauce, all tucked inside a flaky phyllo crust. It’s too big for her to finish, so I generously offer my assistance.

We and the handful of other guests are entertained by Justin and Tom, a long-haired country rock duo, playing tunes by Tom Petty, Neil Young, the Eagles and Bob Dylan at just the right volume for dining conversation. It all makes for a pleasant evening. If we’d paid hundreds of dollars to discover a place like this on a weekend vacation getaway, we’d consider ourselves lucky. Yet it’s right in our own backyard. 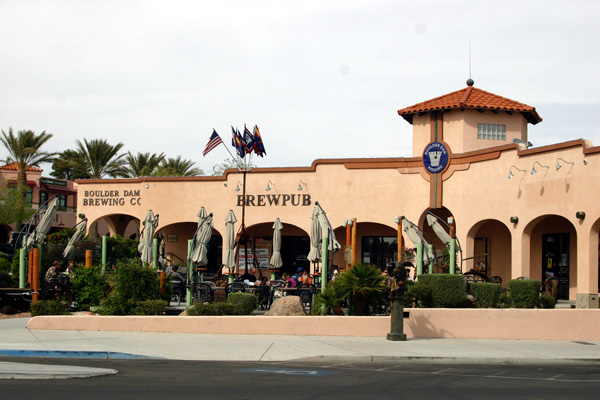 But still no sign of a ghost. I figure a drink or two might make me more receptive. After dinner, my wife returns to our room (she’s not as enamored of seeing dead people as I am), and I wander across the street to the Boulder Dam Brewing Company, a microbrewery and beer garden that continues the Hoover Dam theme. (Everything in Boulder City, it seems, ties back to the dam.) They offer six handcrafted brews with names like Powder Monkey Pilsner, High Scaler IPA and Black Canyon Stout. I choose the Reclamation Amber, a deep-red ale with a nice hoppy flavor. After a couple of pints and a Baileys and coffee to end the evening back at the hotel – by now, Justin and Tom are hanging around the lobby picking Muddy Waters blues – it’s time to go exploring.

I duck into an out-of-the-way elevator and hit the down button, somewhat surprised when the doors open to let me into the bowels of the hotel. The basement is nothing special, just a long linoleum-covered corridor with a number of meeting rooms and storage closets on either side. I poke my head into the ones that are unlocked. Other than a slight chill (the basement is easily 15 degrees colder than the lobby) and a mild case of nerves brought on by the thought of being discovered, I’m once again disappointed. Around 11 p.m., I reluctantly call it a night.

The next morning, we take advantage of our free museum passes. Tucked into a corner of the second floor of the hotel, just beyond an art gallery, jewelry store and gift shop, the Boulder City/Hoover Dam Museum is well worth the time it takes to go on the self-guided tour. More than just documenting the arduous task of building the dam (ahead of schedule and under budget, no less), the museum never lets us forget the Depression that uprooted entire families and made men grateful for the chance to risk their lives in 130 degree heat for $4 per day.

Through tape-recorded oral histories, life-sized cutouts and historical artifacts, the museum brings the stories to life. The parallels to today’s economic crisis are striking, as is this quote from Will Rogers: “The whole country is behind FDR. … If he burned down the Capitol, we would cheer and say, ‘Well, we at least got a fire started somehow.’” Or this one from diplomat Dwight Morrow: “There is something about too much prosperity that ruins the fiber of the people.”

As I stare at the haunted eyes of the men and women and children who settled here and built the dam and made our little corner of the world possible, it occurs to me that I may have found my ghosts after all.

10 responses on “Giving Up the Ghost in Boulder City”