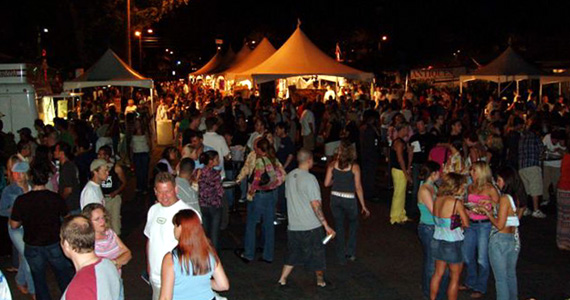 I know very little about culture, and even less about art. Working in law enforcement, I don’t get much of either on the job. But lately I’ve been curious about art and culture here in Sin City, so last month I decided to take a trip downtown to the Las Vegas Arts District. The district has gallery openings and exhibitions throughout the week, but there is also an all-inclusive event on the First Friday of each month, when the district is open to the public in a big way. That seemed like a good place for me to begin my arts education, and it was.

First Friday is kind of like a block party, with plenty of food, clothing and merchandise for sale and several after-parties to attend, but what I really wanted to see were the artists, their styles and their creations. My plan was to interact with the creative and artsy crowd to learn, and that would take a determined effort, because I am quiet and reserved by nature. I needed to get my “social juices” flowing, so I first approached some people I knew I’d be comfortable with – three police officers on foot patrol – and asked them if they ever had any problems at the event. One said it’s an easy event to patrol because the people there are typically peaceful and law-abiding. When I told them that it was my first visit to First Friday, they suggested that I go to the Arts Factory, where I’d find a variety of galleries, vendors and performers. Sounded like a plan. 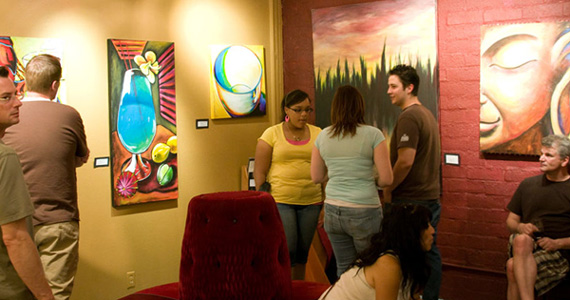 Courtesy of FirstFriday-LasVegas.org
Galleries have plenty on display for First Friday
attendees

As I made my way toward the Arts Factory, I still wasn’t really ready to open up, interact or reveal my inquisitive side. But when I arrived at the intersection of Main and a small street called Boulder, I saw another kind of person I’m accustomed to dealing with – a crack addict who, despite his obvious condition, seemed like a nice enough guy. He told me about some of the cool things he has seen at the First Friday outdoor festival, but my conversation with him ended abruptly when he asked, “So, do you do anything besides write?” I told him and before I knew it, he’d picked up his backpack and walked away. I figured that concluded my “social warm-up” and hoped that I would not get the same reaction from people inside the Arts Factory.

When I entered the building, I felt like I’d taken a trip back in time and the abundant artwork was my flux capacitor. Suddenly I was back in October 2002, on my first trip to Las Vegas, once again faced with an overwhelming number of interesting things to see and do. How does this woman make such cool jewelry by hand? Who wrote that wonderful short story on the wall over there? What is the name of that band outside? And who in the hell are these “Fantasticks” that everyone is talking about? 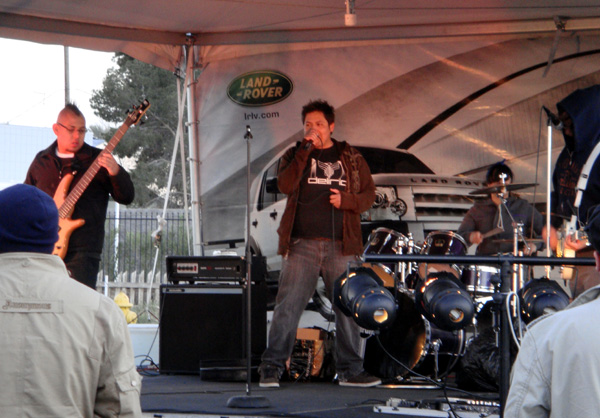 Photo by John R. Taylor
Despite the chilly weather, a few hardcore music
fans stayed to listen to the live bands

I soon found that the artists were interesting to talk to. I learned that “The Fantasticks” is the longest-running Broadway musical and that one of my favorite actors, the late Jerry Orbach, had a huge part in its fascinating history. The play is currently being performed on the second floor of the Arts Factory. I had a hilarious conversation with a random-minded artist (her paintings were great, too). Trying to keep up with the speed of her speech and the tangents of her thinking was entertaining yet exhausting. Unfortunately, I never located the writer of that great short story called “The Clutch Purse,” posted on one of the walls.

After walking the interior of the Arts Factory, I went back outside to find that the weather had chased away the band’s audience and even the band itself, so I walked over to the outdoor festival following directions the crack addict had given me earlier. There I found artists who were not only creative, but also crafty. One multitalented artist created portraits and had his own line of T-shirts. Another artist, Jesse Heinreich, somehow managed to create detailed and elaborate portraits with spray paint. 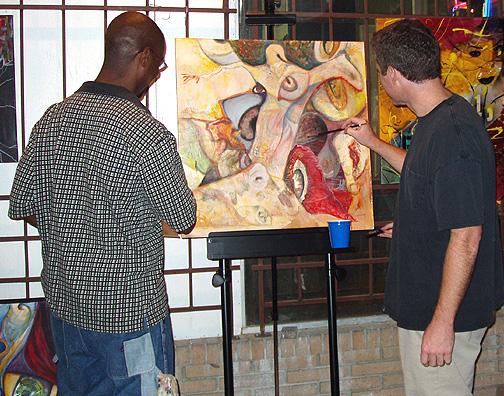 Courtesy of FirstFriday-LasVegas.org
Art while you watch

As I continued to explore the outdoor festival, I noticed – for the first time – how many murals there are throughout the Downtown area. A few people were bouncing their heads to the music of the two remaining bands, and others grabbed some chalk to make interesting sketches on the pavement. Just outside the festival area, a talented couple, dressed in shabby clothing, surprised passersby with their violin and guitar skills. Sci-fi nerds passed out fliers to events, and I saw a hilarious guy wearing a full-length, lime green, fake-fur coat. Somehow, he made it look cool.

4 responses on “A Crazy Night at First Friday”