Sadly, the Veloce Cibro is no longer open to the public. Perhaps one day soon, we’ll be able to toast the view and enjoy the splendor of this great restaurant... 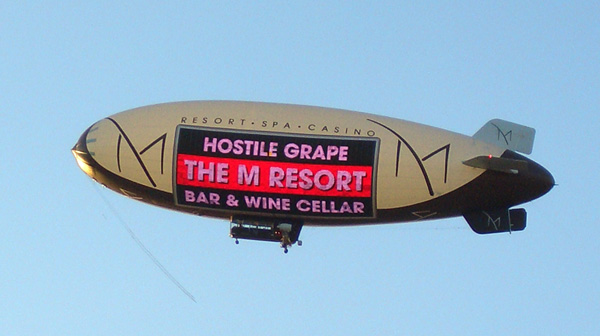 Photo by Megan Edwards
For weeks before the grand opening, the M
Resort’s high-tech blimp let the valley know
what was coming

Ever since I saw the first cranes laboring at the corner of Las Vegas Boulevard and St. Rose Parkway, I assumed I’d go to the grand opening of the $1 billion M Resort and Casino. It’s only two miles from my house, after all—practically walking distance. But when the fireworks began exploding the night of March 1, I wasn’t among the thousands who watched them up close. Even though casino openings are iconic occasions in Las Vegas, I skipped the traffic and crowds and enjoyed the pyrotechnics from my own backyard. I waited until the next morning to check out the property that hopes to redefine the Strip by extending its southern boundary by seven miles. In fact, the M Resort lies within the city limits of Henderson, making it the only development on Las Vegas Boulevard required to pay city taxes. All the other mega-resorts on the Strip are in unincorporated Clark County. 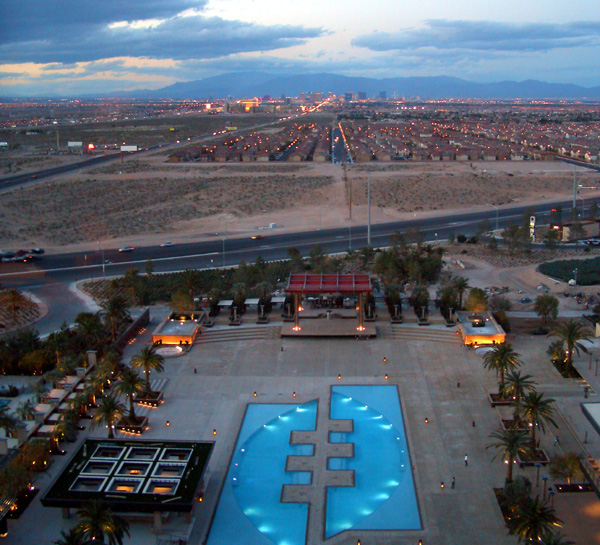 Photo by Megan Edwards
Twilight view from Veloce Cibo, the restaurant
on the hotel’s sixteenth floor

My plan was to have breakfast at the Red Cup Café, the resort’s 24-hour coffee shop, but I changed my mind when I saw the line. Half the population of Henderson was waiting for a table, and the rest was queued up in the “Players Club” line. Because the M is a place I can return to easily and often, I decided to spend my first visit taking a walking tour instead of playing the waiting game.

There’s a lot to admire. The M’s architecture is airy and open, and the décor features plenty of natural stone, wood, chrome and glass. Even the casino, though designed to focus on slot machines and gaming tables, has more light and space than most such venues. The other public areas, including a large atrium overlooking the pool, have huge picture windows. While most casino properties are worlds unto themselves, completely cut off from their exterior surroundings, the M has views in all directions: 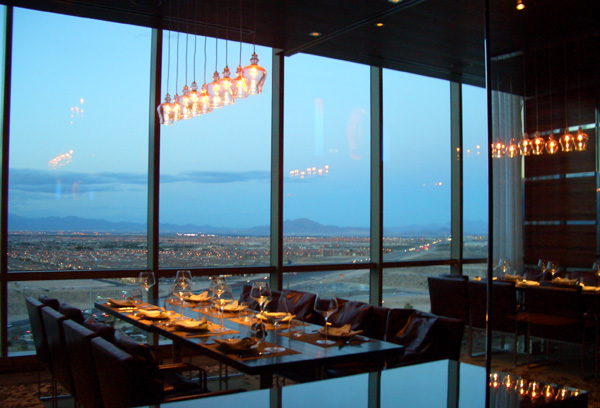 the Strip to the north, the city to the east, and mountains to the south and west. While faux Egypt—or Paris or Venice—is fun, it’s lovely and refreshing to walk through a building that really celebrates its location. The windows gracefully frame the beauty of the desert and the Strip, and I knew that first morning that I would have to come back another time to enjoy the natural artistry of a desert sundown from this great new vantage point.

Photo by Megan Edwards
The view inside Veloce Cibo is pleasing, too

On my second visit, I arrived around 5 in the evening because I had noticed that was when Veloce Cibo, the bar and restaurant on the 16th floor of the hotel tower, opens for business. I parked on the west side of the property and entered near the elevator to the restaurant. (Another nice feature of the M Resort is that not every door leads into the casino.) A small crowd had gathered next to the check-in desk, and it didn’t take long to find out that most were locals who, just like me, were eager to enjoy the view and a glass of wine on the 16th floor.

Veloce Cibo (which means, amusingly, “fast food” in English) runs the length of the top floor of the M, giving it a long, sleek, boatlike feel that’s enhanced by the tapered ends of the building. The entire north side is glass, and every table—more than 300 of them—has a view of the Vegas valley. I decided to take a seat at a table in the bar at the west end of the “boat,” and on my way to my table, I caught sight of an unusual display of wine bottles. They were arrayed side-by-side, soldier-fashion, to encircle a gleaming machine. What’s with that?

My waitress was happy to explain.

Two bars at the M, Veloce Cibo on the top floor and the Hostile Grape (another amusing name) on the bottom floor, feature the Enomatic wine serving system, an Italian innovation that lets customers help themselves to 1-ounce, 3-ounce, and 5-ounce “pours” of a variety of wines. First, you obtain a wine card and charge it up with some cash. Slip your card into a slot on an Enomatic machine, and it deducts the price of whatever libation you download into your glass (prices start at about $2). Clean wine glasses are available for each new wine you select, as are wine lists that describe the various offerings, from sake and Madeira to Riesling and shiraz.

Veloce Cibo offers both bar food and a full dinner menu. That first night, I opted for the full experience, which was made even more lovely by the changing view as the sun descended and the Strip blazed to life. For a leisurely evening of wine sipping and appetizer tasting, this place is impossible to beat. The menu is an eclectic lineup of dishes from sushi and a wide variety of “sharing plates” to traditional entrees, side dishes, desserts and specialty cocktails. The prices are pretty swell, too. My bill for the evening was about half what I would have paid for the same experience farther up the Strip. The chef appeared at my table to make sure everything was to my liking, and my waiter was attentive and cordial. 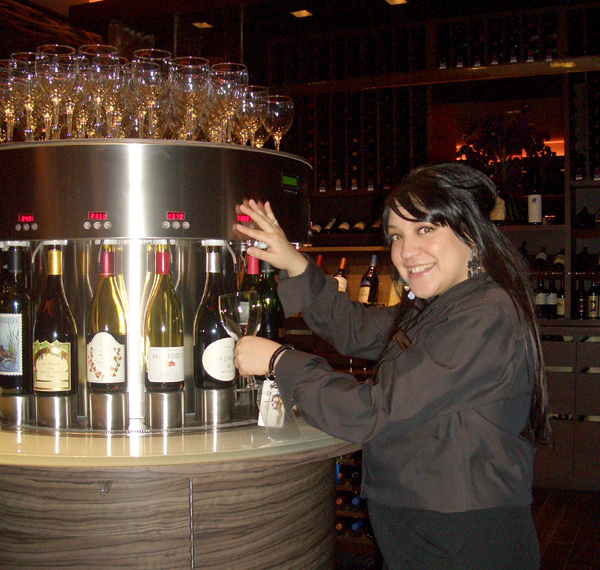 Photo by Megan Edwards
Eloise, who works in wine retail at the M
Resort, demonstrates how to operate the
Enomatic system

On my third foray to the M, I finally descended below ground level to check out the Hostile Grape. I’d been impressed by the Enomatic display upstairs, but the array in the wine cellar was nothing short of awesome. Dozens of bottles lined the walls of two alcoves that surrounded two islands offering even more bottles. Happy-looking customers were wandering among the machines, sipping while discussing which vintage to try next. Others were lounging on leather sofas and at the bar in a warmly lit room styled to feel like a wine cellar. After tasting two kinds of sake and chatting with one of the attendants, I knew I had better head back upstairs. A self-serve wine bar is not a wise place to linger unless you have a chauffeur.

There’s quite a bit more at the M Resort that I have yet to experience. There are six more restaurants and several more bars, for starters, as well as a pastry and gelato shop, a full-service pharmacy, a spectacular pool area, a spa and an opulent sports book. Judging from the vast forest of yet-to-be-planted trees and shrubs I spied from the 16th floor, the M’s already nicely landscaped grounds will continue to evolve. I’ll be back to watch—and not only because I have $38.50 left on my wine card.

14 responses on “The M Resort: Great Views and Wine by the Sip”