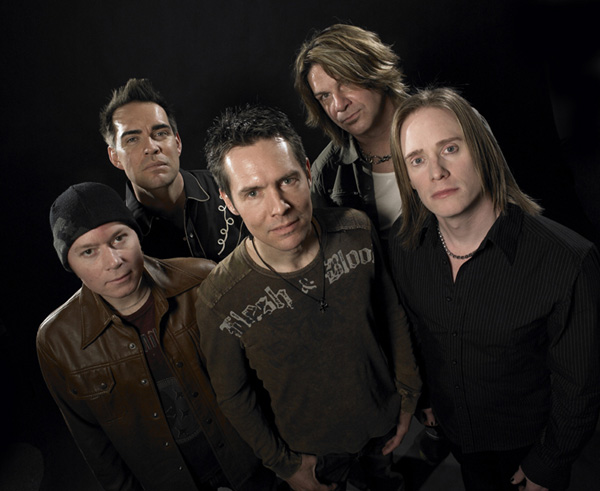 Since I’ve lived in Las Vegas, friends and family have come to visit about once a month or so. I love playing the hostess role, but my guests understand that if they want to explore the Strip, they’re on their own. I’d rather show them a good time local-style, which means at some point I’ll be taking them to see one of my favorite classic rock tribute bands, Yellow Brick Road. These guys are a blast and I don’t have to worry they might have an off night; YBR never disappoints.

Yellow Brick Road is a must-see act for anyone who likes their rock ‘n’ roll loud and hard. Their repertoire features music mostly from the ’70s and ’80s, and though my personal taste leans toward sensitive singer-songwriters (think Jackson Browne and James Taylor), the band’s showmanship and musicianship have won me over—big time.

YBR is more than just a bunch of guys covering classics from the past; their note-for-note re-creations of rock anthems readily earn them the “tribute band” moniker. However, instead of playing homage to one artist, as is typically the case, they offer music from many different bands of that musical era, including Rush, Led Zeppelin, The Who, Pink Floyd and many, many more. 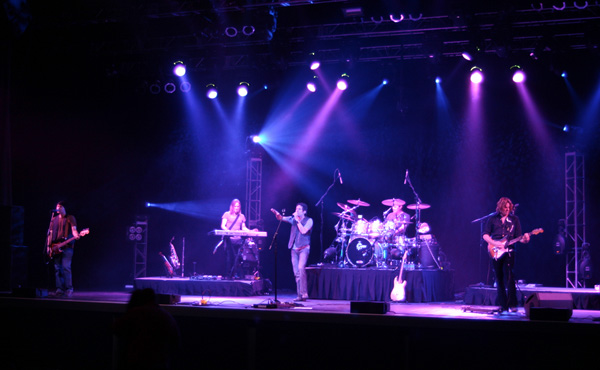 Photo by Linda Evans
Live at the Aliante Access Showroom

Yellow Brick Road’s frontman, Brody Dolyniuk, is a vocal chameleon who morphs from Steve Perry to Roger Daltrey to Freddie Mercury to Sammy Hagar to Bono—all in the course of one set. Sometimes he dons wigs or other costume accessories, and I’ve laughed out loud watching him do Mick Jagger’s peacock strut or shuffle around the stage as befuddled rocker Ozzy Osbourne. Dolyniuk’s performances balance playfulness with reverence for the music, and he’s always fun to watch.

I started following YBR soon after I arrived in Las Vegas in May 2003. One of my favorite haunts was, and continues to be, the Railhead, the showroom in the Boulder Station Hotel and Casino, where the band has been performing since the fall of 2000. Back then I had no one to play with and since I’m not the type to stay home on a Saturday night, I often went out on the town by myself. Women sometimes confide to me that they’re too intimidated to go out solo and feel uncomfortable sitting alone. “No problem,” I tell them. “All you have to do is pretend one of the guys in the band is your boyfriend. That way, you’re not really alone.” When I went out to see YBR, I picked the cute bass player as my object of affection.

Recently I caught the band’s show at Ovation in Green Valley Ranch Resort and Casino. Ovation is a great little room, more intimate than the Railhead, but its dance floor is still roomy enough for everyone to let loose during “Sweet Child of Mine.” Afterward I got a chance to talk with Brody and my pretend boyfriend of more than five years, bass player David St. John. 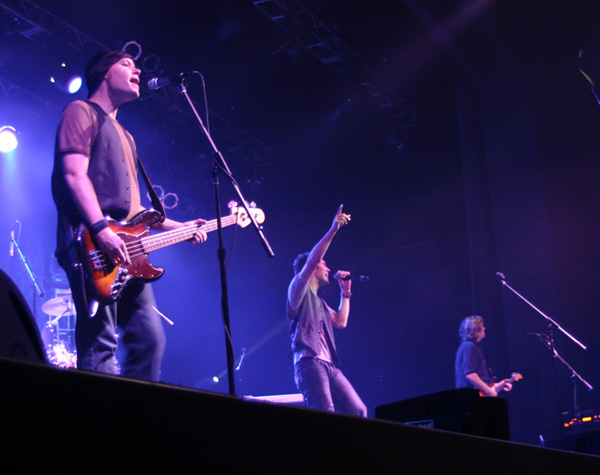 Brody told me he’s originally from Wichita, Kan., and landed in Las Vegas by way of Tulsa and southern California. He formed the band in the summer of 1997 as an Elton John tribute band—hence the band’s name, Yellow Brick Road, and started adding other material as time went on.

“We don’t just play the hits. We like to do what’s technically challenging,” Brody said. He’s not kidding. Really, how often do you hear a band cover “Hocus Pocus” by Focus? Believe me, it’s a treat. His ability to mimic the voices of rock heroes has been recognized beyond the local showrooms and has landed him gigs singing three tracks on “Guitar Hero III: Legends of Rock” and eight tracks on “Rock Revolution.”

Brody explained that over the course of 12 years, YBR has had three major personnel overhauls. The last occurred in September 2008, when lead guitarist Brooke St. James and the multifaceted musician  Jonathan Gilcrest joined Dolyniuk, St. John and drummer James Sloan. The new band lineup incorporates a wider range of instruments. Gilcrest brings a wealth of talent and plays, among other instruments, the sax, keyboard and flute—great news for Jethro Tull fans. “Each time, the band gets better and better,” Brody said.

“We don’t lip-sync like a lot of popular bands,” he added, though he admits to using a backing track for one song. “If anyone can tell which one it is, I’ll buy them a drink.”

And if YBR isn’t the tightest, most professional classic rock band you’ve ever seen, I’ll buy you two drinks. 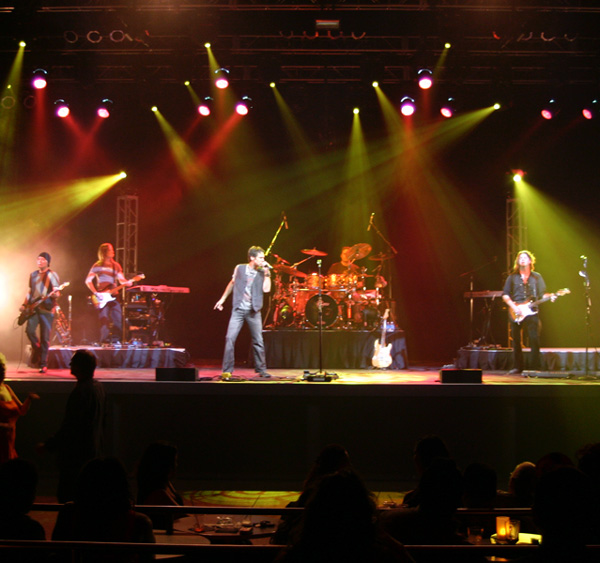 I confessed that in the past, I was never into “testosterone rock,” as I call it, but through YBR I’ve been digging that genre more and more. Brody’s face lit up. “When we can turn someone on to music they hadn’t heard or appreciated before, that’s the biggest compliment we can get.”

While I was in the mood for confessions, I enlightened David to the fact that he’s been my band boyfriend for over five years. God bless him, he gave me a hug, and maybe it was my imagination, but he honestly seemed pleased. I’m now convinced that the secret to lasting relationships is simply to keep them in the dark.

The guys were great sports and I was thrilled to meet them. Still I had to ask, “Would it kill you to play some Grateful Dead?”

Yep, I got the impression it would.

Yellow Brick Road performs Wednesday nights at the Ovation Lounge in Green Valley Ranch, Friday nights in the Access Showroom at Aliante Station, and Saturday nights in the Railhead at Boulder Station. Admission is free.