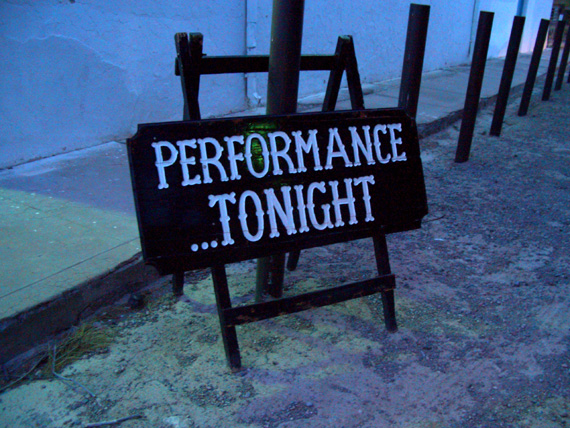 Float Marta Becket’s name out at a cocktail party in Las Vegas, and you’ll get a variety of responses.

For those who’d be asking that last question, Marta Becket is the Ballerina of Death Valley Junction, a dreamer who traded a career in New York City for a crumbling ghost town in the middle of nowhere. Now in her 80s, Becket and her then-husband arrived at the intersection of California Highways 190 and 127 in 1967, dragging a trailer with a flat tire. While she waited for the tire to be repaired, Becket took a look around a block of decaying adobe buildings built in the 1920s by the Pacific Coast Borax Company. Though already in a state of serious disrepair, the buildings ignited Becket’s imagination, especially the surprising structure at the end of the row – an abandoned theater. “I thought it was the most beautiful place in the world,” Becket says in her show. The whole story of what grew from that initial assessment can be found in Becket’s recently published autobiography “To Dance on Sands,”

but the pivotal event was that she and her husband bought the property. Becket then embarked on what would become a lifetime project: to transform the old theater into an opera house and to build an audience for her one-woman shows.

Attracting an audience in a ghost town surrounded by hundreds of miles of empty desert is no easy task, but Becket was undaunted. After furnishing the theater with stage and seating, she simply painted an audience on the walls. That original audience—a Shakespearean-looking crowd—saw her through the early years when paying patrons were few and far between. By the 1980s, which is when I first caught Marta Becket’s show, word had spread that no visit to Death Valley was complete without an evening at the theater, which she had named the Amargosa Opera House. Fortunately for Becket and the arts, Death Valley Junction is about a half-hour’s drive from Furnace Creek, the main settlement inside Death Valley National Park and the home of two well-known hotels. Bolstered by tour groups and visitors from Las Vegas, Becket’s audiences now fill the theater whenever she performs.

Back in the ’80s, Becket would don a pink leotard, tutu and satin toe shoes to sing, dance, and talk her way through the show—never mind that she was already in her 60s. Her show evolved over the years, but the pirouettes and pliés were always the centerpiece. After all, Becket was a ballerina and ballerinas dance. But lately, I’d heard, Marta Becket no longer danced her way across the stage; now in her 80s, age had caught up with her. And yet she was still performing. 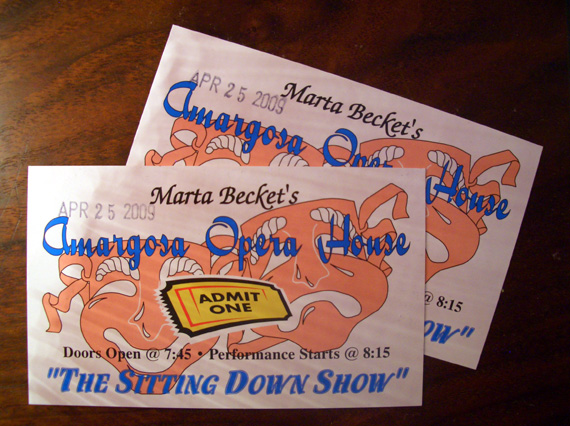 “She dances sitting down,” someone told me.

Curious, I convinced Mark to drive out to Death Valley Junction with me a couple of Saturdays ago. Figuring we might as well take in the full Marta Becket experience, we made a reservation at the Amargosa Hotel, part of the same crumbling complex as the Opera House and also owned by Marta Becket. Our room, we were told, would have a king-size bed and full bath—with a bathtub! It sounded quite luxurious for a desert outpost, and I was looking forward to a long soak in that tub.

After we got our key at the registration desk, we headed down a narrow hallway to our room. Hand-painted portraits lined the walls. Most of the doors to the guest rooms were standing open, and we peeked inside as we walked by. Every room we looked in had some kind of wall painting. One room had a fully spread peacock tail painted over the bed. In our room, cupids flitted around the walls. When she wasn’t dancing, Marta Becket had been painting.

As promised, the bathroom had a tub. I turned on the faucet and found plenty of hot, soft water and loads of pressure. If the room seemed a little more Spartan than I had expected—sparse furnishings and naked bulbs dangling from the ceiling don’t exactly promote a feeling of luxury—the bath was going to make up for it.

Mark uncorked a bottle of wine we’d brought with us, and we sipped a bit before I headed back to the bathtub. But this time when I turned the faucets, nothing came out. I tried the sink. Bone dry!

Mark headed down to the registration desk to find out what was wrong. He returned with the news that something on the pump had broken, and somebody had to drive somewhere to get something to fix it. “Nobody knows how long it’ll take,” he said. “And nobody seems very concerned.”

I wasn’t too happy about attending Marta Becket’s show without getting so much as a shower, but my spirits lifted as Mark and I drank some more wine and ate the picnic supper we’d brought with us. There is a small café on the grounds of the hotel, operated under separate management, but after hearing that it often runs out of food, we’d come prepared.

After supper, Mark again headed down to the registration desk. While he was gone, I tried turning the tap once again, and—hallelujah!—water. I checked the time. Hooray again! Just enough time for a quick soak before heading to the Opera House.

But, alas, I had cheered too soon. After only a few seconds, the water was gone again. Damn.

A minute later, Mark came back into the room with a big smile on his face.

“I know,” he said. “A good-looking German woman wearing only a towel just ran down the hall letting everyone know.”

The water came back on a few minutes later, and while I didn’t get the relaxing soak I’d hope for, at least I was clean when we walked over to the Amargosa Opera House at 7:45 and joined the crowd waiting outside. 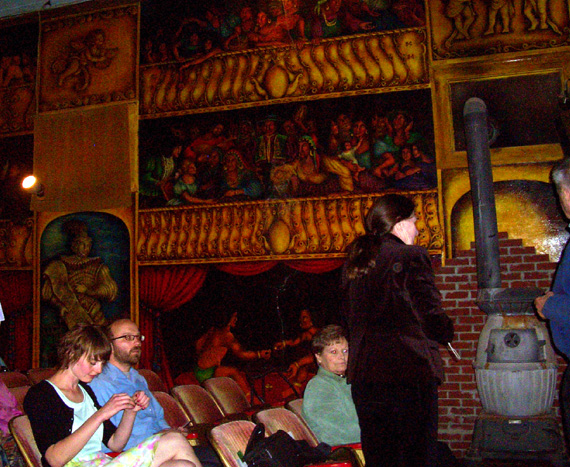 If you’re a guest at the hotel and you’ve bought tickets for Becket’s show, you get to go into the theater ahead of the crowd. Mark and I headed up to the front row and claimed a seat near a dusty grand piano. While we waited for the show to begin, we joined the rest of the crowd in snapping countless photos of the painted audience on the walls and cupids on the ceiling. Well, that’s what I did. Mark spent the time scanning the room for the German woman to see how she looked in clothes.

After the manager of the Opera House and hotel welcomed everyone, made a pitch for an array of show-related merchandise, and let everyone know that Marta Becket would sign autographs after the show, the lights dimmed. The star, clad not in pink tulle but in a long blue dress, emerged through a curtain at the back of the stage. With the help of a cane, she made her way to a small table and slowly eased herself into a chair behind it.

One thing I can say for the Amargosa Opera House is that it has a decent sound system. Becket’s voice is not strong, but her microphone carried it to the far reaches of the room. As she spoke, the audience hung on every word. That’s star power, I decided. When you can hold the attention of more than 100 people in rapt silence, you’ve got something. When you can inspire them to drive 150 miles into the desert to do it, you’ve really got something. 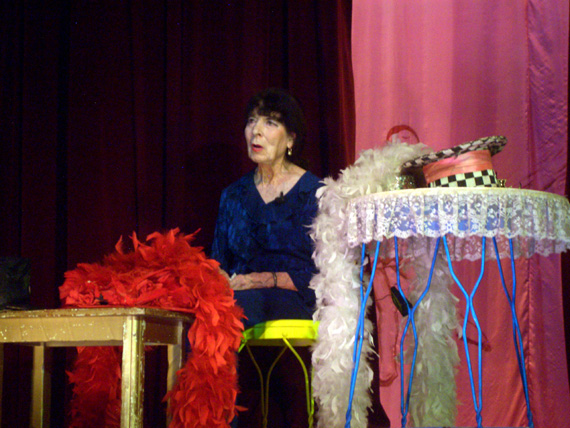 Using a few props like a feather boa, a sequined hat and a stick-on mustache, Becket took us on a retrospective of her career as the Dancing Diva of Death Valley Junction. She told the story of how she came to Death Valley Junction, how the theater once filled with mud after a flash flood, and she painted verbal pictures of the characters who had come and gone over the years. Every so often, she added color with a costume or prop and sang snippets of songs—a cappella—from the shows she had written. Her voice was sweet, clear and on key, but it also sounded ethereal, as though any second it might float away into the upper atmosphere, never to return.

When the show ended, after about 45 minutes, Becket moved to another chair on the edge of the stage, and the audience surged forward, books and programs in hand. I watched from my spot near the dusty piano as fan after fan shook her hand and smiled. We left before Becket had finished greeting all her admirers, but I’m fairly certain that the autograph session lasted longer than the show.

On our way back to our room, we strolled through the public rooms and bought ice cream bars in the hotel’s gift shop. The rest of the audience stuck around for awhile, too, eating ice cream, enjoying the murals, listening to the manager tell tall tales, and checking out an old player piano and other artifacts on display.

Although the Amargosa Hotel is said to be haunted by a child ghost, we spent an uneventful night within its walls. Driving back to Las Vegas, I thought about our brief sojourn in Death Valley Junction. What metaphor best describes the phenomenon that is Marta Becket? In some ways, she’s like a desert wildflower. Such blooms would be lost in the exuberance of a botanical garden, but standing alone in hostile surroundings, they are spectacular little miracles, and you can’t take your eyes off their fragile, fleeting beauty. Marta Becket is like that, I thought. She’s a desert rose.

But then, as we drove on, I noticed the tamarisk trees. Exotic invaders, tamarisks thrive in the desert because they sink a long taproot and drink from the water table. Wildflowers bloom with spring showers and wither in the summer sun, but tamarisks are always green. Their low, spreading branches create shaded nooks and crannies, and they attract whole communities of desert wildlife, from ants and moths to rabbits and birds. A New Yorker in the Mojave, Becket is an exotic, too, and she’s sunk a long root at Death Valley Junction. Over the years, she has attracted an array of desert rats and city slickers, some of whom have moved in to stay. Others, like me, drift in for a visit and then leave.

Desert rose or tamarisk, one thing is clear: Marta Becket is one of a kind, and she’s never coming to a theater near you. If you want to see her, you have to head to Death Valley Junction. If a sign out in front of the Opera House says “Performance Tonight,” and there are still tickets available, you’re in luck. Otherwise, you’re out in the middle of a howling desert at a hotel that might or might not have running water and a café that might or might not have food.

No, this isn’t Vegas, baby. It’s definitely something else.

7 responses on “Marta Becket: Still Dancing in the Middle of Nowhere”