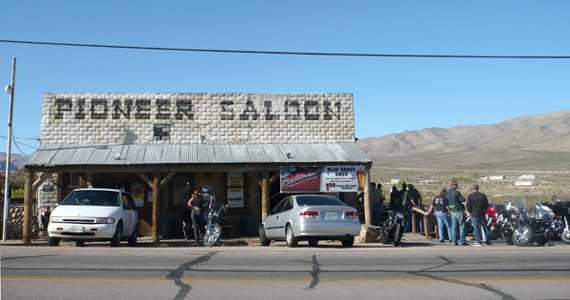 One year ago my first article posted on this site. It was an account of the Laughlin River Run, the annual motorcycle gathering that attracts thousands of enthusiasts from all over the country. I had just as much fun at this year’s event and as long as I live in Southern Nevada, the River Run will be a permanent fixture on my calendar.

I don’t ride myself. I’m way too “Princess and the Pea” for any activity involving a helmet and the mess it would make of my hair. And though I completely understand why any self-respecting Harley rider would leave me by the side of the road rather than endure my incessant chatter, I nonetheless love being smack in the middle of a crowd of bikers. The people are friendly and down-to-earth, and nothing beats the blues and classic rock music that is characteristic of the biker culture. 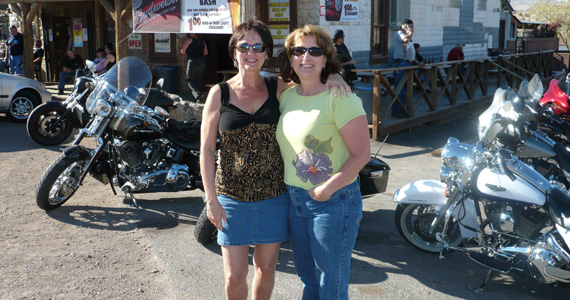 Recently I asked Paul Sotirakis, a sales rep at Henderson Harley-Davidson, for some referrals to some fun biker bars. He rattled off a few of my favorites, such as the Sand Dollar Blues Nightclub & Lounge on Spring Mountain and Polaris, Hogs & Heifers Saloon in downtown Las Vegas, and the Mountain Springs Saloon out Route 160 on the way to Pahrump. Then he mentioned a place where I had yet to shoot some 8-ball: the Pioneer Saloon in Goodsprings, Nev., about 35 miles south of Las Vegas. Time to check it out, I decided.

I have no problem exploring new hot spots on my own, but my friends and family shudder at the thought of some of my solo excursions, so a few weeks ago I enlisted my friend Lisa Gioia-Acres to accompany me to the saloon. Lisa shares my sense of adventure and since we’re both 51-year-old grandmothers, we fit at least one biker demographic: According to a recent New York Times article, the average age of a Harley rider is 49.

The Pioneer Saloon is easy to find. From Las Vegas take Interstate15 south to Exit 12 at Jean, then head west on Route 53/161 for about six miles (if you don’t see it, you have no business driving.) Lisa and I made it there in no time—maybe it was our girl talk in the car that made the ride go by quickly—but our grand entrance was anything but graceful. Immediately upon entering the parking lot, which was jammed with motorcycles, I realized there’d be no place to park. Since there was no through exit, I had to perform a three-point turn, ever so carefully, under the scrutiny of scores of beer-drinking Harley owners.

I was this close to re-enacting a scene from “Pee-wee’s Big Adventure,” the one where the hero accidentally knocks over a row of bikes belonging to a gang of “Satan’s Helpers.” Fortunately, I was able to maneuver out of the lot without incident and parked across the street on the side of the road.

“Well, here we are,” I said to Lisa when we finally settled on barstools on the outdoor patio. “Just a couple of grannies spending Easter Sunday at a biker bar.”

Built in 1913, the Pioneer Saloon is one of the oldest bars in the Wild West and has been featured in a number of TV shows and movies, including “Fear and Loathing in Las Vegas” and “Miss Congeniality.” Its rich history is documented in framed newspaper clippings and artifacts on its walls, making the place half watering hole, half museum. It’s said that in 1942 the famous screen legend Clark Gable waited for three days at the bar for word on his wife, Carole Lombard, who died in a plane crash at Double Up Peak near Mount Potosi. Modern-day patrons can place their steel-toed boots on the same brass foot rail on which Gable may have rested his feet.

The building has maintained its character over the years. Bullet holes in the pressed tin walls are still visible from a 1915 shootout over a poker game, but Monica Beisecker, the bar’s manager, assured us that today’s clientele is a peaceful sort. “We never have any problems here,” she told us.

There’s a reason I’ve lived in Las Vegas for six years and had never heard of Goodsprings. Back when the Pioneer Saloon was built, Goodsprings was a booming mining town with a population of about 800. Today there are only 200 residents, and the saloon and the general store next door are its only two businesses. The original bell at the three-room Goodsprings Elementary School is rung every day to summon the students—all six of them—to class.

Whether you pull up in a Sportster, a Softail or a dusty 13-year-old Saturn (as we did), you’re sure to enjoy the Pioneer Saloon’s lively atmosphere and sense of yesteryear. Because of state smoking laws, the Pioneer Saloon no longer serves food, but Monica let us know you can buy your fixings at the general store next door and cook a meal yourself on one of the eight outdoor commercial-quality barbecues. Between the pool tables, rockin’ music, cold beer and no shortage of interesting-looking characters, who could ask for anything more?

4 responses on “The Pioneer Saloon: A Fun Biker Bar, Even for Those Who Don’t Ride”