Skip to content
When my friend Mike Dickman told me that he had entered the National Open chess tournament this year, I figured he’d be traveling to someplace big and cosmopolitan like New York to participate.

The South Point? The casino that’s practically in my own backyard? The one that always smells like horses? 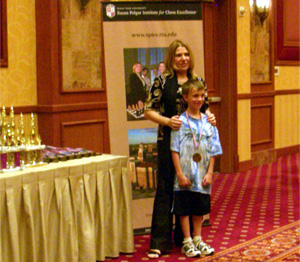 Yes, that was the one. Although the South Point is best known for its equestrian arena and cowboy ambience, it has meeting rooms suitable for events other than calf roping. On Thursday, June 4, chess players from as far away as Mongolia and as nearby as Henderson began gathering for the 44th annual National Open Tournament and the International Chess Festival. Before the weekend was over, more than 670 players ages 7 to 92 had competed for $77,000 in prizes. In addition, more than 280 children had competed in the concurrent World Open for Boys and Girls tournament organized by Grandmaster Susan Polgar, a Hungarian-born chess champion who now directs a chess institute at Texas Tech University.

As I learned more about competitive chess and the people who play, I discovered that the National Open is not a newcomer to Las Vegas. In fact, it’s been held here since the early 1980s, when tournament director Fred Gruenberg first got the green light from the United States Chess Federation to bring the tournament to the Strip.

Frankly, I was shocked to find out that a large and prestigious chess competition had been taking place in Las Vegas the entire decade I’d lived here, and I had never heard about it. I did arrive a year after former world champion Anatoly Karpov attended – perhaps that was enough to generate a headline or two – but even so, you’d think that in 10 years I’d get wind of a major annual nerdfest being held on local ground. I’ve never played chess myself, but ever since I had a crush on a guy in high school who played speed games at lunch, I’ve liked the cerebral types who do.

Thursday evening I headed over to the South Point and joined a cadre of men heading up the escalator (yes, chess is still a predominantly male game). They were all carrying black bags of a type that might have alarmed me if I hadn’t already learned that the bags are designed to hold, not machine guns, but rolled-up vinyl chessboards, chessmen and chess clocks. Armed and eager, the crowd was assembling for the festival’s first event, the “Game/10” tournament, which requires contestants to play six games in no more than 10 minutes each.

The main event began Friday morning. I joined even more bag-toting eggheads on the escalator, all headed for the South Point’s “Grand Ballroom,” a room the size of a football field with a stage set up against one wall. Long rows of tables stretched end to end, each furnished with dozens of chessboards. Shortly before 11 a.m., staff members posted “pairings” on bulletin boards in the hall, generating a crush as players checked to find out their board numbers and opponents. A few minutes later, following announcements by the tournament organizer, several hundred simultaneous handshakes kicked off the first game. 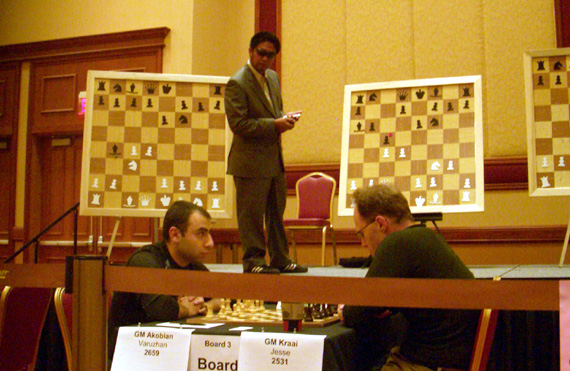 Top-rated players enjoyed seats at tables directly in front of the stage. Chairs nearby gave front-row spectators a good view of the action. The games were replicated on large “demo boards” for those watching from farther away; whenever a player made a move, a tournament worker would move the corresponding magnetic piece on the board. Top players also used an electronic device called a “Mon Roi” (“My King”) to tabulate their moves and transmit them directly to the Internet. Live from Las Vegas, the games were being broadcast to chess aficionados around the world. 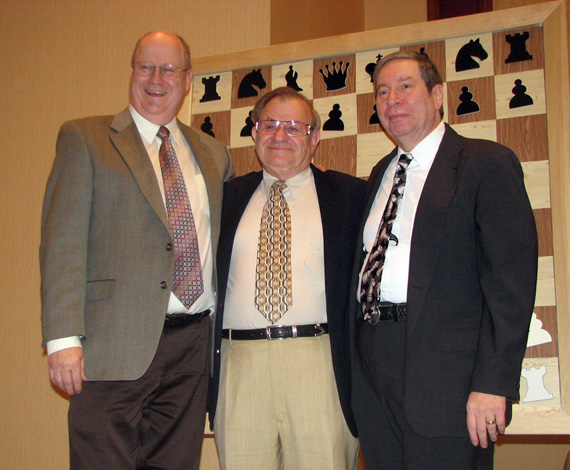 Tournament director Alan Losoff told me that the demo boards had been constructed specially for the National Open by high school shop students here in Las Vegas. It’s possible to use electronic demo boards these days, he said, but he prefers the low-tech approach because the tournament lighting tends to wash out the monitors. I liked the old-fashioned demo boards, too; they matched the hands-on feel of the live play they represented.

2009 was a special year for the International Chess Festival because it was longtime director Fred Gruenberg’s last. Retiring after 25 years with the event, Gruenberg was honored in a short ceremony Saturday night. Losoff, who has also directed the tournament for a number of years, will continue the traditions Gruenberg put in place.

“We credit Freddie with putting the fun back in chess,” Losoff said. “That’s going to continue. We want people to feel like they’re stars when they come to the National Open.” He went on to say that everyone enjoyed the South Point. “They’ve treated us well, the food is good, and the service is great,” he said. The South Point is a good venue for families, too, he pointed out – and that’s important because so many children participate. In addition to bowling alleys and movie theaters, kids were enjoying the free rodeo events going on in the equestrian arena. 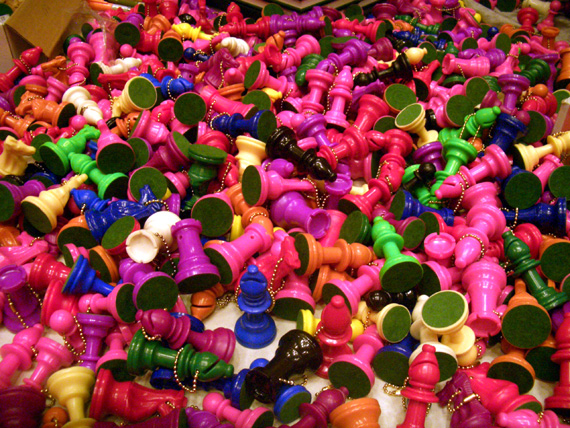 Competition continued through Sunday night. In addition to the National Open, players had the chance to play a fast-moving variant of chess known as “Bughouse” and compete in a “Blitz Tournament,” in which players have a maximum of five minutes to complete a game. Grandmasters provided game analysis, and a chess store offered a wide array of books, chess sets and other chess-themed merchandise for sale. Each night raffle prizes were awarded, culminating in a grand prize the final evening: airfare and registration for next year’s festival. 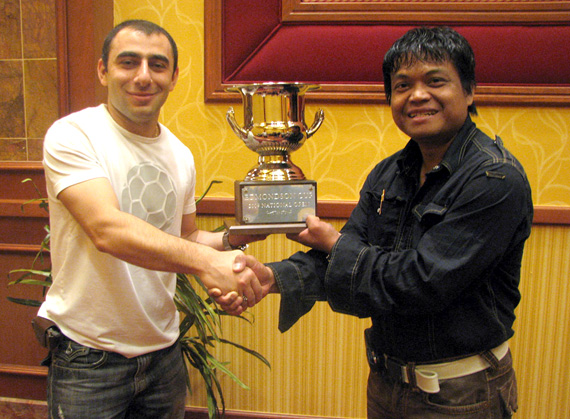 When I first heard that a prestigious chess tournament had been held in Las Vegas regularly for a quarter of a century, I was surprised. The game’s reputation for erudition just didn’t seem to fit with roulette wheels and slot machines.

Alan Losoff set me straight. “Chess players love to come here,” he said. “They’re gamers—they like to play all kinds of games.”

Suddenly, it was all so obvious. Instead of being the last place to expect an international chess tournament, Las Vegas instantly seemed like the absolute best. When they weren’t playing chess, attendees had only to take a few steps to enjoy a variety of other games. I noticed several telltale black bags at the feet of players in the South Point’s poker room, and even a few sitting next to slot machines. Las Vegas has worked out so well for the National Open that the event will be back next year at the South Point, and it will probably be held in Las Vegas for many years to come. 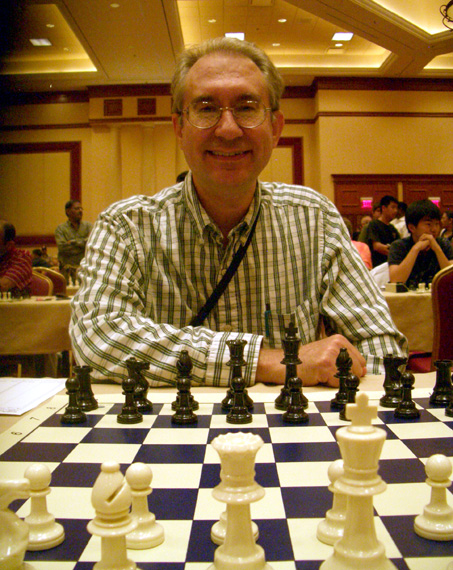 I asked my friend Mike (who’s also a blogger on this site) about his experience at the Open. A recent Vegas transplant, Mike hadn’t played competitive chess in 30 years. It was the happy discovery that the Open was taking place at a conveniently nearby casino that got him back into the game.

“It was all good,” Mike said. “Organizing that many people and keeping them all happy is no easy task, but the organizers pulled it off. The South Point was a great venue—I hardly even noticed the smell of horses.” Mike won $250 in the Game/10 tournament – and another three bucks playing poker between chess games on Saturday. Here’s Mike’s play-by-play analysis of his games in the Open tournament.

Yes, chess and Vegas are obviously an excellent match.

The video below gives a great taste of the Las Vegas International Chess Festival. Watch Grandmaster Tigran L. Petrosian play 22 opponents — all at the same time!

4 responses on “The South Point Gambit: Chess in Las Vegas”