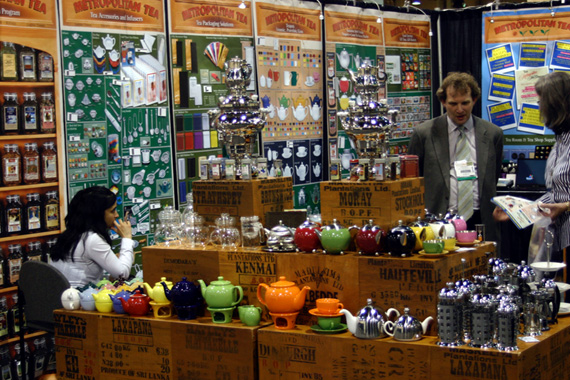 I’m a tea guy, not a coffee guy. I prefer tea’s gentle, sustained lift over the nuclear jolt of coffee, especially when I’m writing. Right now, my companion is a 32-ounce organic black iced tea from It’s a Grind. It tastes like dirt. Or, to be more precise, the earth it grew in. I find it oddly appealing.

I even make my fast-food decisions based on the quality of the tea. Jack in the Box, Del Taco and Carl’s Jr. all serve real brewed iced tea, unlike many of their competitors. I hate the trend toward those newfangled canisters that dole out four – count ’em, four – varieties of instant iced tea at the touch of a button. Luckily, they’re usually broken.

By all accounts, tea is one of the healthiest of drinks, brimming with antioxidants. Now, I don’t know a polyphenol from a catechin, but I am hopeful that my cup of tea will counteract the effects of the fat and grease at the above-mentioned establishments. So far, so good. 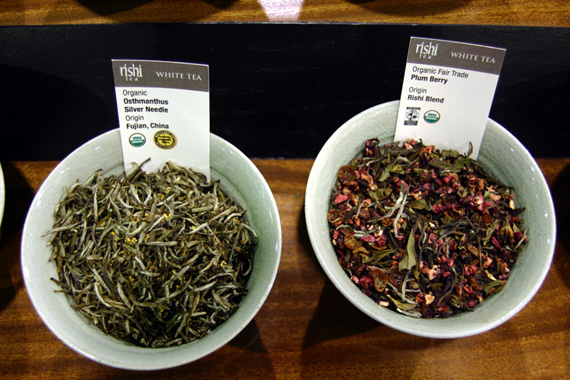 Photo by Linda Evans
White teas on display at the Expo

I’m not alone here. Domestic tea sales are expected to top $10 billion this year. By comparison, coffee sales will be $40 billion, but the tea sector is growing at a more robust clip.

As I’m sure you’ve surmised, I’m no tea expert. But I wouldn’t mind learning more. So when I run across an ad for the 2009 World Tea Expo in one of our local business publications, I’m intrigued. The event, held May 2–4 at Mandalay Bay, promises “inspiration, continuing education and product innovation.”

What it fails to mention is that it’s open only to the trade and the press. Fortunately, my affiliation with Living Las Vegas works like magic. After scrutinizing my business card and making me fill out a lengthy form (what, no retinal scan?), the friendly but by-the-book PR lady issues me an official press pass. At length, I’m allowed to enter the hallowed halls of tea heaven. 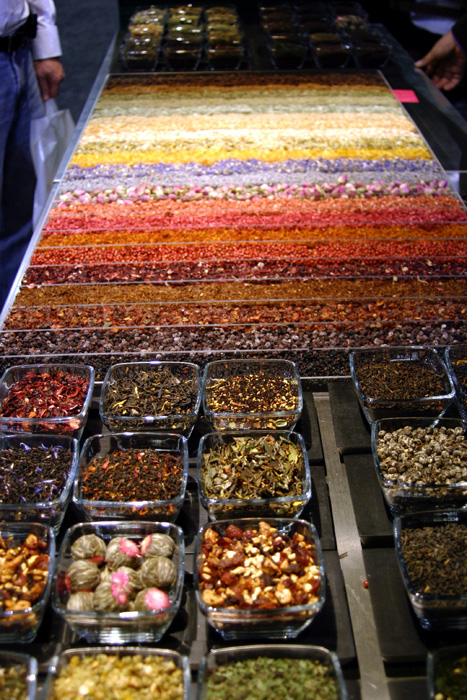 The convention area is brimming with activity. Thirty thousand square feet, thousands of attendees, 228 exhibitors representing 39 countries, many of which I can’t pronounce and couldn’t find on a map. Not a Lipton banner in sight. I grab a tote bag and start making my way down the aisles.

First stop is the Tasseo booth from Indonesia. An exotic woman with the equally exotic name of Tejandra hands me a small cup of Java Jasmine tea. The flavor is potent, almost overpowering. With more than 200 booths to go, I’d better pace myself.

Good luck with that. Every aisle is a gauntlet of samples, impossible to resist, and everyone’s got a story. At the Jafferjee Brothers booth, the man explains that the tea growing season is only six weeks out of the year. The folks at Perfectly Natural Herbs claim to sell “the original green tea.” Aiya offers “Matcha, the mother of all green tea, 800 years old, shade grown, hand picked, only the youngest plants.” Ozone Tea touts the moringa herbal infusion, “from the Elixir tree, native to India, the most nutritious plant on earth.” And, of course, there’s Mundi rooibos tea, “a natural herb red shrub found only on the slopes of the Cedarberg mountain range in the western cape of South Africa,” with purported anticancer, antiaging and cardiovascular health benefits. 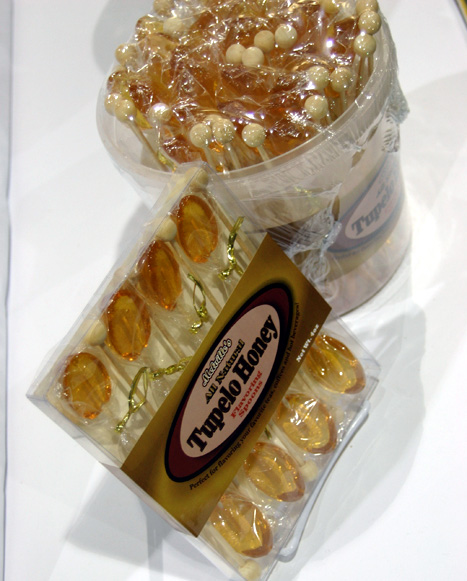 Photo by Linda Evans
Tea spoons made of honey

And it’s not just tea. It’s everything even remotely associated with tea. Like healthful but addicting green tea dark chocolate candy from Torn Ranch Distinctive Foods. And cardamom tea cookies from Botanical Bakery. “We make them in small batches to maintain integrity,” says Sondra Wells, self-professed baker, CEO and janitor of the successful 6-month old company. According to Wells, the secret’s in the European-style butter from Straus Family Creamery in Marshall, Calif. The butter leaves a nice coating in my mouth that stays with me the rest of the day.

There are also tea magazines and tea beauty creams and children’s books about tea (“Emma Lea’s Tea with Daddy”). And tea tours to China, Korea and Japan. And teapots and tea warmers and tea carafes. And tea jewelry. And the International Tea Sippers Society. And hats and aprons and knickknacks from the official-sounding but decidedly funky Tea Bureau. And Cirqua customized water, “because water makes up 98.5% of your beverage.” The only thing missing is a teeth-whitening system for those of us drinking too much tea. 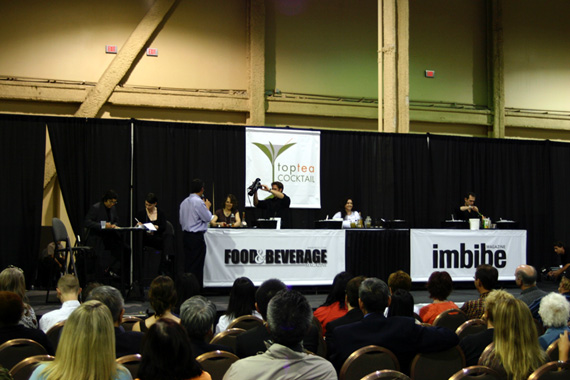 And then I discover a little touch of genius at the Melville Candy Co. booth. A “Tea Spoon” made entirely of honey. They also have ones made of lemon. Just when you think everything that can be invented has been invented …

It’s a lot to, well, absorb. And all the while, events, demonstrations and seminars swirl around the periphery. I take a break to observe a “Modern Teaism” ceremony performed by Master Sen So-Oku before drifting over to the finals of the first-ever Top Tea Cocktail competition. “It has a nice balance, the sweet and bitter combination comes together nicely,” says one judge after tasting a “Ginger Machatini.” I don’t stay to watch them crown a winner.

After four hours, the tremor in my hand and the twitch in my eye mean I’ve had enough. On the way home, I stop by one of my favorite fast-food joints. One double-double with cheese. Hold the iced tea.

6 responses on “Strip Teas, Or How a Cuppa Goes Down in the Desert”