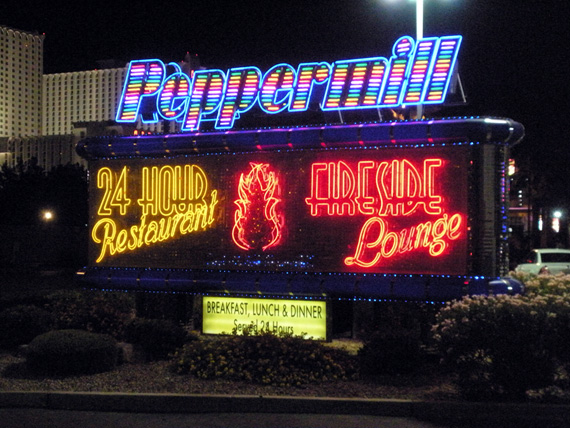 Photo by Linda Evans
Beckoning locals for 40 years: the Peppermill

We’re not the most sentimental bunch here in Las Vegas. Most of our traditions get blown up, bulldozed and steamrolled to make way for the next big thing. Occasionally, someone cares enough to stick some artifact in a museum or storefront. But more often, the object in question simply disappears, never to be seen again, like the Bugsy Siegel suite at the Flamingo.

For years, Las Vegas’ official slogan was: “What happens here, stays here.” I think a more appropriate one would be: “Don’t get too attached.”

That’s why I find it comforting that a handful of old-time establishments have managed to hang on, sometimes for decades. Like the Peppermill restaurant on the Strip. The Peppermill opened its doors on Dec. 26, 1972, at 11 p.m. I know what you’re thinking. “That’s only 37 years – big deal.” Well, it is by Las Vegas standards. This ain’t Manhattan or Chicago, after all. Time takes on a different meaning here. 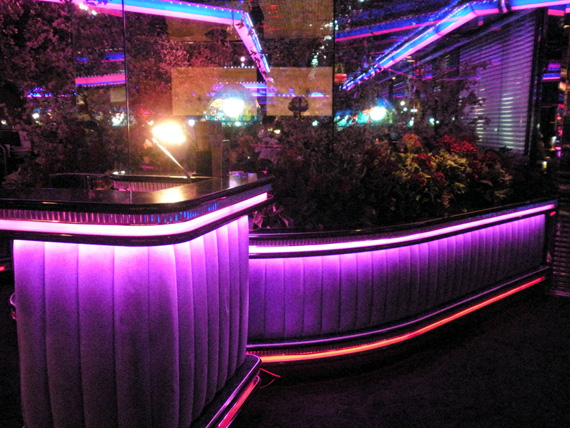 Photo by Linda Evans
Immortalized on the screen, the Peppermill’s
neon-enhanced interior is instantly recognaizeable

The Peppermill is one of the few stand-alone structures still in existence on the Strip. It sits back from the street behind a nice, convenient parking lot – a throwback to the days when you could park directly in front of every casino. (Quick story: When I moved here in 1981, I could literally leave my car 20 feet from the main terminal at McCarran and waltz right in. Today, to paraphrase Woody Allen, you could take a taxi from the overflow lots.)

If you’re heading north on the Strip, the Peppermill will be on your right, wedged between the Silver City Plaza and the Riviera Hotel. The Silver City Plaza derives its name from the now-defunct Silver City Casino, which closed its doors for good in 1999, despite a last-gasp attempt at survival as the only nonsmoking casino in town. (I could have told them it wouldn’t work, but nobody asked me. Smoking and gambling go together like drinking and gambling. In fact, the more vices you can pile into one session, the better.) That’s something else you should know about Las Vegas – the names of things usually outlive the things themselves. Or they get recycled. If you head down to Lake Mead, for example, you can stop at a little hotel/casino called the Hacienda.

Photo by Linda Evans
If you’ve got it, flaunt it: mirrored ceilings and plastic
cherry trees in bloom

If you’ve seen a great film like “Casino” or a really bad one like “Showgirls,” you’ll recognize the Peppermill the minute you walk in. Both movies had interior scenes in the restaurant and lounge; so has the “CSI” TV show. The aptly-named Fireside Lounge, dark and intimate, is where you’ll find the Peppermill’s signature element: a fire pit with gas flames dancing out of a pool of electric-blue water. Sidle up to the bar and order one of 60 exotic drinks from Alabama Slammers to Zombies. Or live dangerously and try an ice cream drink specialty like a Creamsicle or Ultimate Mud Slide, concoctions that taste like milk shakes but sneak up on you fast.

The restaurant interior is as colorful as its history and as kitschy as it gets, with a mirrored tile ceiling, plastic trees sporting fake cherry blossoms, and oversized horseshoe-style booths with faux-Tiffany flamingo lamps perched over every table. The booths are done up in a combination of maroon, green and blue velour, with red neon skirting running along the bottoms. The menus, the napkins, even the server uniforms all carry the same floral color scheme. Either these guys are branding geniuses or they own a flower shop on the side. Somehow, it all works. And every table comes with its own peppermill, which just makes good sense. (I’m reminded of the time I went to Chili’s and they were out of chili. If you’re gonna call yourself something, you’d damn well better carry it.)

In the end, though, the Peppermill is about the food – more than 100 menu items in all.

My wife and I bring our appetites on a recent June afternoon, knowing that the Peppermill has a reputation for generous portions. My wife orders Dijon chicken, which comes with a choice of soup or salad (tossed green or spinach), veggies, potato and garlic bread. Our server, Sarah, is helpful and attentive without being overbearing. “The spinach salad has bacon bits, eggs and a red dressing,” she volunteers. It’s also accompanied by a chilled fork, an unexpected touch.

I opt for a mushroom Swiss burger and onion rings. (Onion rings or potato salad can be substituted for fries at no additional charge.) When Sarah brings our food, the blond lady from Boston in the adjacent booth gasps, “Oh my God, look at the size of those rings.” I offer one up and she readily grabs it from my plate. “Be sure to tell everyone back home how friendly the locals are,” I suggest in my best Chamber of Commerce manner.

The burger is a half-pound of Angus beef, perfectly broiled, spilling out from the soft, fresh bun. My wife’s portion is even larger, two chicken breasts complemented by a mound of real mashed red potatoes and fresh, not frozen or canned, green beans and carrots. 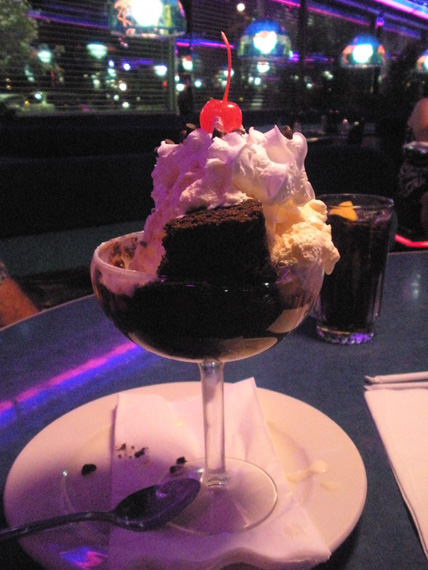 Photo by Linda Evans
Hold the entree: a Peppermill dessert

As we finish, Sarah asks us about dessert. “Too full,” I say, certainly not the first time she’s heard that. “Do people actually order dessert?”

“If they come in just for dessert,” she smiles.

The bill before tip, including iced tea, is $36 and change, a real value for the money, especially on the Strip. After dinner, I talk to assistant manager Martha Montague, a trim, bespectacled woman who’s been with the Peppermill since the day it opened.

“I was a senior at Clark High School,” she tells me. “They put me on as a waitress on graveyard with absolutely no training. Just said, ‘You’re on Station 1,’ and threw me into the deep end. We were busy from day one, the line out the door. I was the worst waitress in the world. But I picked it up fast.”

Martha goes to her office and brings back an original menu, orange and black – the color scheme before everything turned all floral. The prices are eye-opening: $4.50 for a complete sirloin dinner, $3.95 for shrimp Creole, $2.25 for ham and eggs. (The Peppermill has always been a 24-hour restaurant with every menu item available throughout the day.)

“We were considered expensive in those days,” Martha says. “We’ve never been a Denny’s. We’re a cross between a diner and a dinner house. Our main competition is the Strip hotel coffee shops. We can compete with Bellagio and beat them on price.”

Over the years, the Peppermill has developed a faithful clientele. “Visitors, mostly. Locals tend to forget about us, but we see the same out-of-town guests coming back time after time. Now they bring their kids and grandkids. Same with our staff. I’ve worked with daughters of some of our original employees. The Peppermill has always been like one big family. A place like this becomes your home.”

It’s what’s kept her here all this time, catering to everyone from conventioneers to movie stars. “Oh, yes, we’ve served some really famous people. Robert DeNiro used to sit at the bar when they were shooting ‘Casino,’ drinking by himself. Just a super-nice guy. The Smothers Brothers, Debbie Reynolds, all the way back to Sinatra. Penn Gillette, from Penn & Teller, is a regular. He patterned the kitchen in his home after ours.”

What’s the secret to this kind of loyalty and longevity in a city like Las Vegas? “Quality food, lots of it, friendly staff,” Martha says. “It’s the reason we’re keeping our heads above water, even during the recession. Believe me, the Peppermill isn’t going anywhere.”

5 responses on “The Peppermill Beats the Odds”