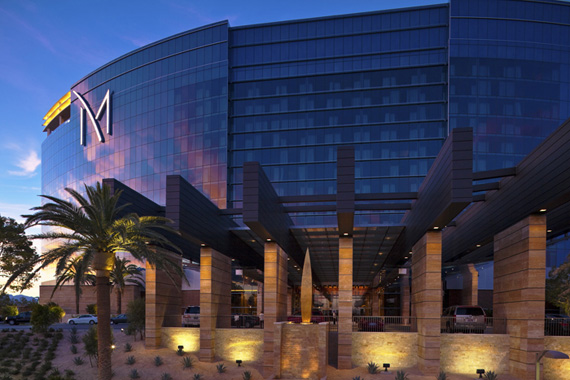 Stay•ca•tion [stā-kā-shun], noun
A period of suspension from work, study, or other activity, usually for rest or recreation, without actually leaving the town where one resides

When I received the introductory discount for a two-night stay at the M Resort and Casino, which opened in March, I figured I would visit yet another substandard hotel and casino off the Strip for a quiet and somewhat boring stay. Boy, was I wrong.

I pulled into the parking lot after working more than 20 hours straight. One of those “year-long” weeks had finally come to an end and it was the perfect time for my annual Las Vegas staycation. As I approached the doors, I admired the beautiful exterior, but it didn’t lighten my horrible mood any.

Inside was a different story. Though the lobby was filled with people trying to register and collect their complimentary $75 in slot play, the high ceilings and open design made the space seem spacious and welcoming. There were water walls and terrific views out the big windows in the lounge. I really wouldn’t mind hanging around for a while. But I didn’t have to wait. At the huge registration desk, the clerks were busily handing out keys, and it was only a matter of seconds before I reached the desk. For my room, I was given a choice of views (that was a first). I opted to stay on the 11th floor, where I would have a great view of the valley including the Strip. My huge sour puss was beginning to resemble a smile. 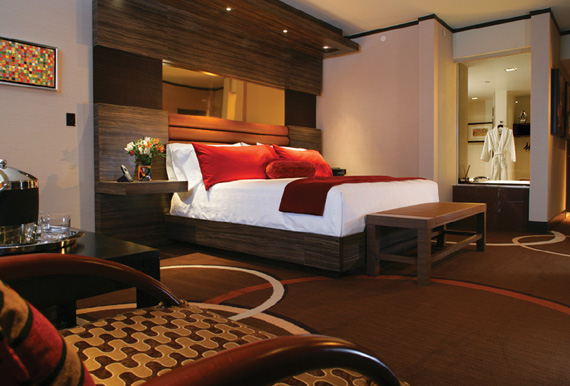 As I stepped through the door to my room, I wondered if I’d somehow ended up at some fancy hotel in the heart of the Strip. The view through the floor-to-ceiling windows was great, and the room came with a huge flat-panel television, a sitting area, a desk, a shower, a separate bathtub, his-and-her sinks and a second TV inside the bathroom mirror! Free Internet access, too. Someone definitely got the memo on the coolest room designs.

I sat on the bed to watch the news. I work in law enforcement and the news entertains me. Where on Earth do they get their facts? I would explore the casino later – at least, that was the plan. Three hours later, I woke up, groggy from a dream that had nothing to do with police work. I guess I needed this getaway more than I realized.

I was meeting my friend Julie and needed to get ready. Shaving my head is usually a tedious chore, but not when there’s a TV in the bathroom mirror. I was so amused that I nicked my scalp. Downstairs there were more marvels, including skylights in the casino that let in lots of natural light (something unheard of in the casino industry) and scotch priced at just $8 a glass in the Lobby Bar (about half what you’d pay at other casino lounges). There was just one disappointment, and it was my own fault: I’d left my cigars at home. 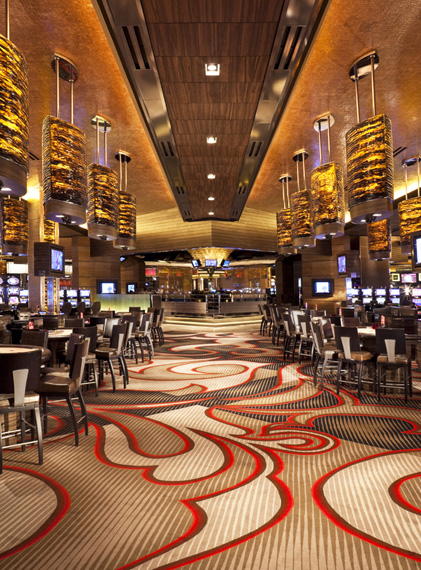 When Julie showed up, we grabbed a quick bite at the resort’s Vig Deli, where the food is good and well priced. I had a foot-long hot dog. It was no Chicago Style Spicy Polish, but still pretty good. Then we headed to the casino.

Usually we sit at the slots and I watch Julie gamble. I never gamble with my own money, but this time I had $75, courtesy of The M. The cigar issue was lingering, threatening to spoil my good time, so before grabbing a slot, I had a look around. I figured I’d find one of those servers who walk around offering dry cigars at three times their normal price. Just when I thought I would have to settle, I found the Vice Shop, which has a humidor. I purchased a couple of Padron 3000s for $20 (a decent price) to satisfy my craving for quality tobacco. After I lost my complimentary cash, we went to the Red Cup Café to enjoy a late meal. The portions were very generous and, again, reasonably priced.

The second day of my staycation began with steak and eggs from room service. I spent the morning getting some writing done, then went exploring before taking another afternoon nap (this one was intentional – napping is an important part of any staycation). I returned to the Vig Deli for a small pepperoni pizza, and enjoyed the view from the Lobby Bar for the remainder of the evening. But the best part was what I didn’t do. I didn’t answer my cellular phone – or even look to see if people were trying to contact me. That simple refusal to answer to the world provided just the relaxing atmosphere I needed. I returned home refreshed and ready to face the life from which I had needed a brief escape.

If you ever feel the desire to escape, consider taking a staycation. Las Vegas is a great place and venues like the M Resort and Casino will make you forget that you actually live and work here.

2 responses on “My Yearly Staycation”